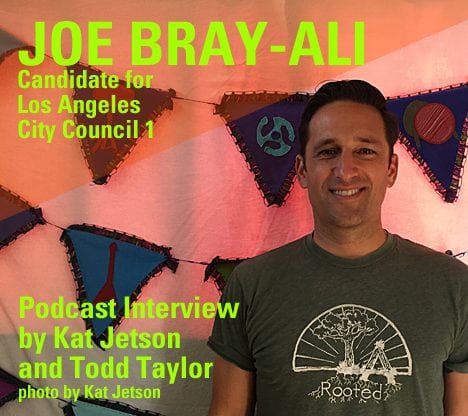 Razorcake’s mission statement has always been that it provides consistent coverage of do-it-yourself punk culture. “We believe in positive, progressive, community-friendly DIY punk. We do our part.” And in that vein, so does Joe Bray-Ali—a grassroots activist running for Los Angeles City Council, District 1. If you simply swap out the punk for bicycles and politics, you essential have two very similar action plans.

For as long as I can remember, music and politics have gone hand in hand, whether it’s folk music and Vietnam, punk rock and George W. Bush, or even Saturday morning cartoons and the “Bill on Capitol Hill” over at Schoolhouse Rock. It should come as no surprise, especially given the absolute bullshit going in and coming out of the White House, that Razorcake is deeply interested in engaging in lively and smart political conversation. And so we found ourselves in the podcast house sitting across from Joe Bray-Ali.

Joe has been an active champion in the Los Angeles community for over a decade. He owned Flying Pigeon bike shop, and was co-founder of the Bike Oven—both which provided an opportunity/the space for many people to learn and share skills. He’s quoted as saying, “I’m not interested in the job; I’m interested in the work.” Which… sounds pretty punk rock to me.

Nearly every day, he is tirelessly campaigning and canvassing Highland Park on his bicycle. (Bike the vote!) He’s an active participant in local debates, marches, and social media—often documenting issues, goals and ideas via live streams on Facebook.

As a 501(c)(3) non-profit, Razorcake cannot endorse any political candidate, but we can remind you that if you live in L.A., voting for City Council is March 7.

On Thurs., March 2, Razorcake issue 96 cover band, Pedal Strike, is playing at Cafe NELA in support of Joe. Here's the FB event for all the info.

My sincerest apologies to Joe Bray-Ali and Kat Jetson. There was a technical glitch and the podcast stops abruptly at fifty-one minutes. The last several minutes of the interview were lost. -Todd