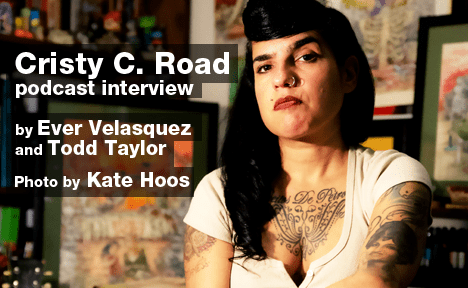 Interview Podcast with Cristy C. Road, By Ever Velasquez and Todd Taylor

Interview Podcast with Cristy C. Road, By Ever Velasquez and Todd Taylor

We were fortunate to catch up with Cristy C. Road while she was on her West
Coast Sister Spit reading tour. Cristy’s a Cuban–American writer, musician,
ponx mujer, visual artist, zine maker, Razorcake contributor/supporter, professor, and illustrator who channels her own bruja energy in Brooklyn, New York.

Cristy has always been someone I’ve admired as an artist who can bring so many
distinct threads together in her work. She’s able to combine Latinx cultura,
ponx, art, and zine-making while being unapologetically queer. Green Zine was born in 1997, which was her own inked dedication of her love for the band Green Day. It later became an outlet for her to share her voice as a Latinx queer abuse survivor and her
personal journey of self–growth. She currently fronts the band Choked Up, which
has taken off from where The Homewreckers left off in 2016. Pull up a seat and
let’s get into the world of Cristy Road. There will be plenty of surprises, shared
memories, remembrances of Lookout! Records, and insights into how she’s able to
make it all happen and make it look easy.