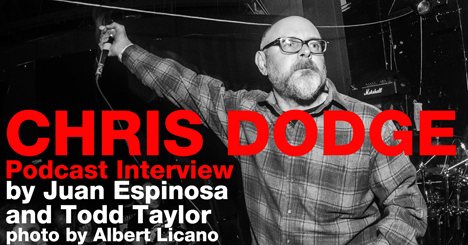 Chances are you’re familiar with the name Chris Dodge if you’re at all into powerviolence, hardcore, punk, or thrash. After all, he only founded Slap A Ham Records, the premier powerviolence and hardcore punk record label of the ’90s. The label released works from movers and shakers such as Man Is The Bastard, Crossed Out, Capitalist Casualties, and Spazz, in which he played bass and sang. Chris has also been invited to play with several of his own favorite hardcore bands including Despise You, Lack Of Interest, and Infest.

The self-described “cave dweller” currently fronts the band To The Point, is co-founder of beer snobs Trappist, and collaborated with Olav and Paul Van Den Berg of Seein’ Red/Lärm fame. We lured Chris out of his cave and into our podcast station with the promise of beer (which we fully delivered) to discuss his past achievements and current obsessions.

This interview ran in Razorcake #105 which can be ordered here.