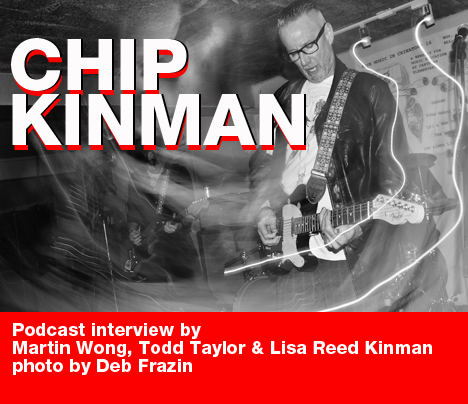 I first saw Chip Kinman sing and play guitar when I was a student at UCLA in the mid-‘80s. I was a big fan of Rank And File, the genre-defining cowpunk band formed by him and his brother Tony (the bass player with the booming baritone), before I knew about The Dils, the first-generation and hyper-political punk band they also co-founded. I was excited to check out their noisy industrial duo, Blackbird. They were great. Buried beneath the thundering drum machine beats and layers of squealing feedback and pitch-black lyrics inspired by Cold War fears, supply-side economics, and trickle-down culture was the sweet signature harmonies only siblings can create. The students at the campus pizza joint who wanted full stomachs, not ringing ears, weren’t quite as stoked as us fans.

A few more bands, genres, and decades passed before I reached out to Chip, wondering if his brand new band, Ford Madox Ford, would play a benefit show to support the music program at my daughter’s elementary school in Chinatown. The idea was to carry on the punk rock tradition of the neighborhood’s old Hong Kong Café, and The Dils were a big part of that story. Chip said yes, his punk-fueled post-blues combo has played for us twice since then, and our families have become friends.

Of course, I had to invite Chip to the Razorcake headquarters, where he shared his journey as a lifer in the underground and talked about being in punk since the beginning, playing in bands with his brother for decades, losing Tony to cancer, and creating music into the future. Who knew that he would re-form The Dils shortly afterward with his son on drums and Giulliano’s friend Brian on bass, or that their first show in forty years would be at our next Save Music in Chinatown benefit show? And so Chip’s story continues as it began.