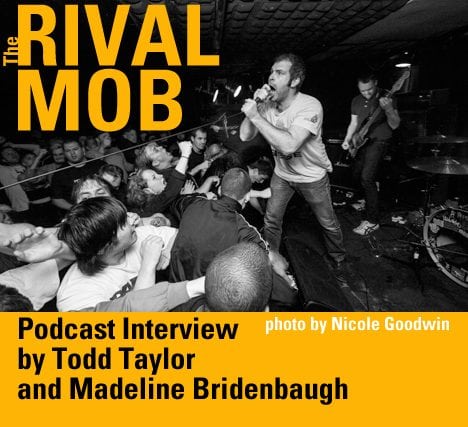 Thuggy hardcore made by older guys; that’s Rival Mob in a nutshell.

I cut my teeth on punk in the late ‘80s, early ‘90s. It was a scarier time at shows and I don’t miss the violence. I think it’s stupid to romanticize people getting stabbed, rat-packed, curbed, and crippled to prove that punk was dangerous or a threat. Yet I still sometimes crave nastiness in the music itself—unapologetic, raw-meat, acid-in-the-wound, life-is-fucked, punch-a-koala, it-won’t-get-better hardcore punk. Much like with Out Cold, I’m cool with hate as long as it’s spread across everything equally. I’m cool with not thinking sometimes, with using my Neanderthal brain to channel the basic need to smash shit to itty-bitty bits—as long as no one besides me gets hurt in the process.

Madeline and I met up with Doug and Justin of Rival Mob at Doug’s “bubble” tea shop in Boston. I was concerned that we’d encounter the Rival Mob party line to maintain mystery, or a hardcore image. My fear proved to be unfounded. They were candid and forthright, not only about themselves, but the band and contemporary hardcore. Doug wishes he could eat an apple without his jaw popping out. Justin equates hardcore fests with cosplay that aren’t as cool as Star Trek conventions. What follows is an honest conversation told by people who’ve been in the trenches for decades.

Special thanks goes out to fellow YOFC’er Tim Brooks, who first introduced me to Rival Mob’s music, then set the stage for this interview.

Songs, from the If You Listen to Fools CS (Trash King Productions)
“Speak with Power”
“I Want to Be Victimized”