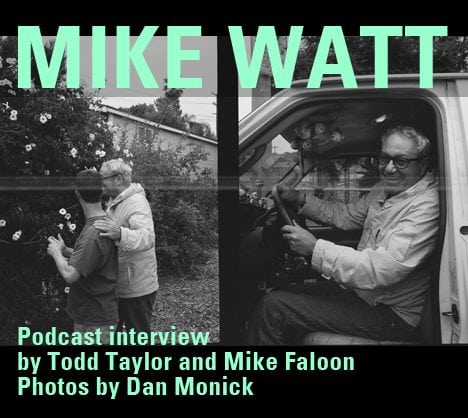 “Several people offered, but it never panned out. He even played a show for us at Pehrspace.”

Mike Watt was the bassist of the almost immeasurably influential Minutemen, a band he started with his best friend, D. Boon. Watt is widely known as one of the best bassists in punk rock of any era. He is a foundational and continuing pillar in Los Angeles punk rock. (San Pedro is located in the City of Los Angeles.)

After the tragic death of D. Boon in an automobile accident, Mike continued on with fIREHOSE. Following a brush with death from an ingrown hair on his perineum Mike tripled down. He put music out under his name (“so you know who to blame”) and has created three operas. He plays with an incredible, sifting array of other musicians (from jazz legends to The Stooges). He collaborates worldwide with people he’s never seen face-to-face.

The day of the interview, Watt rolled in like a fog; knees stiff, his boat safely moored at the bottom of the street.

Mike Faloon and I had prepared five pages of questions. Watt started talking well before we started recording, as we walked back to the studio. I knew Watt was a talker who had his own lexicon, but ten, fifteen minutes in, we hadn’t asked him a single question. He had his spiel. He’d come prepared.

After I asked my first prepared question, I wasn’t sure he’d heard it. It seemed like he headed off in a completely different direction. Minutes later, it dawned on me that Watt wasn’t fishing with a single line. He casted wide nets: nets of deep musical history, nets of interpersonal relationships, nets of associative memories, observations, and ethics.

Mike Faloon and I held on as Watt captained the ship over a vast map of largely unchartered territory. Topics include some of the following…

How the Minutemen briefly flirted with art rock (involving grease and their newly shaved heads). A note left on a napkin to Mike Watt from John Fogerty Creedence Clearwater Revival in the wake of D. Boon’s death. The waters of Watt being on a major label for fourteen years while keeping his autonomy and integrity. Converting the power from the Jackass franchise with the Minutemen song “Corona” into money for D. Boon’s family well after D. Boon’s death. And why Sammy Hagar can still go fuck himself.

Two hours later, Watt pulled in the nets—all of these seemingly unconnected things that had been swimming in a vast sea of knowledge—were cinched up and floomped on a scale for Faloon and me to understand the weight of it.

It was masterful. Linear thought is for squarejohns. Creativity mixed with ethics is the portal to a parallel universe. Sit back, listen, pull out a mirror, and contemplate the abyss.

Much respect to Watt.