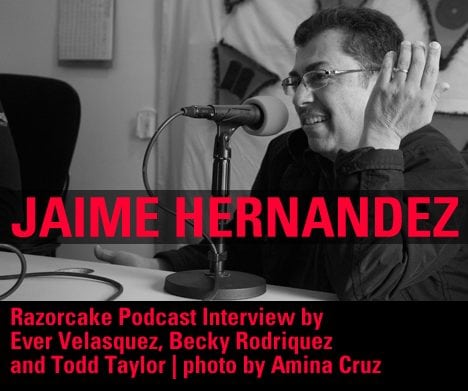 Interview Podcast with Jaime Hernandez, by Ever Velasquez, Becky Rodriguez, and Todd Taylor

Interview Podcast with Jaime Hernandez, by Ever Velasquez, Becky Rodriguez, and Todd Taylor

Jaime Hernandez is more than a mere comic book writer or illustrator. He is part of La Familia Hernandez—Jaime (Xaime), Mario, and Gilbert (Beto)—a group of brothers who created the expansive world of Love and Rockets in 1981. It intertwines three separate narratives, one from each brother, across multiple locations within a creative universe still active today.

I was about fifteen when I picked up my first collection of Love and Rockets while working at a comic book store. A dumb, old customer dude gave me a copy and said, “You need this.” I was surprised. He wasn’t just being a creepy dude trying to hit on me. The book was instantly relatable.

It was the first comic book I’d read to address women being queer and gender fluidity. It was full of people of color. It was populated with women being smart about their sexuality, of women often using their sexuality to get what they want. Women in other comics were most often one-dimensional objects of desire, but Jaime treated women... as women. Who they are as individuals matters. They’re as diverse as school teachers, strippers, punk musicians, and luchadoras. And he depicts without judgment.

Although each one of the brother’s individual works brings something uniquely different to the table of Love and Rockets, it’s how Jaime captures the soul and spirit of each one of his characters—while showing the beauty of each—that never stops amazing me, often leaving me dead in my tracks.

In the following interview, we only focused on a few of Jaime’s Love and Rockets cast of characters. Maggie does it all. She starts as a mechanic and shows us everything she’s made of with every issue. Hopey is Maggie’s best friend and is the more in your-face-character of the duo. They go on endless adventures. (I see myself as a mix between Maggie and Hopey.) Ray is the quiet male equal to Maggie. He’s attractive and set in his own way. Nothing ever gets to him. Speedy—my self-proclaimed man in the series— makes his appearance as the best-looking cholo in Barrio Hoppers. Frogmouth is everything wrong in a person packed in a beautiful female form, which allows her to do as she pleases.

We laughed throughout this interview as Jaime, who was open and warm, talked about how he got into comics; creating his characters; and how dinosaurs, cholos, and punks can be worked into a single storyline.

This interview originally ran in Razorcake #99 (Aug./Sept. 2017). The best way to never miss an issue of Razorcake—and to support us directly—is to get a reasonably priced subscription delivered to your door. Click the link below.