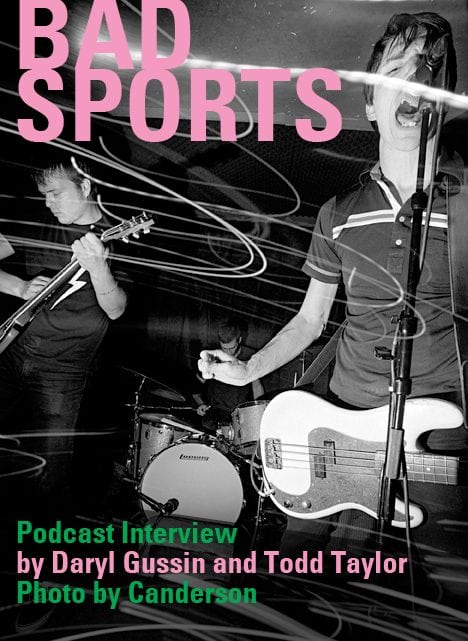 Bad Sports, originally from Denton, Texas, has been around for over a decade. In just the past four years, Daniel has put 213,000 miles on his van, touring.

Bad Sports is a fantastic band, worthy of deep and repeated listens. Their latest, Living with Secrets, is one of the best punk records released in the past twelve months. While it’s true that members of Bad Sports are in Radioactivity, OBN IIIs, and Video, do not mistake that they are merely living beneath the shadows of their other bands, stealing from their deli plates in the green room. Bad Sports has its own identity that’s rooted in both early punk and rock’n’roll—Ramones bubblegum-wrapped bullets, Van Halen’s high-stepping fireworks flair—but the longer they exist, they’re filling that high-tension crackle and gymnastic sparkle with a catchy darkness. Their music is becoming more vulnerable and creepier; suffused in twilight weirdness. Mix in self-effacing confidence, nascent slam poetry, lottery dreams of running a bed and breakfast, and ten years of severe beatings as a band. Come out the other end tunnel with expectations calibrated, a friend’s bed broken, and a shattered windshield.

When they play live, they’re a three-fingered fist; an undeniably tight, tense, vein-bulged statement of purpose.

After this interview ended, we shared quite possibly the best peach we’ve all ever eaten. Orville learned new ways to make steel cut oatmeal. Gregory disappeared until the show, then re-disappeared until they got back in the van for San Francisco the next morning, and Daniel lamented playing in Japanese pants with special heat technology. Sweeatttty.