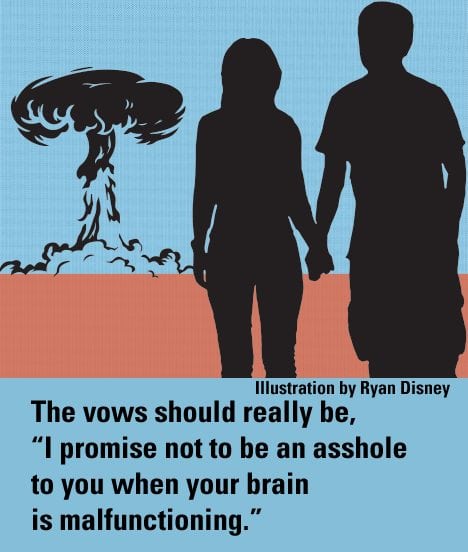 In Sickness and in (Mental) Health By Jamie L. Rotante

One of the biggest aspects of paranoia and anxiety is the intense feeling of isolation it causes. Simple day-to-day tasks seem insurmountable, the thought of picking up the phone is like performing a death-defying stunt in front of millions of strangers, and making small talk with acquaintances is migraine-inducing. All of these unavoidable duties cause the anxiety to bubble up in a way that’s hard to explain to “normal”-minded (as subjective as that is) folks. How do you explain to someone that you’re not avoiding their calls because of something they did, but instead because talking on the phone—especially if other people are present—is just downright frightening? But it’s not an “isolation because no one understands me” scenario—it’s the notion that I’m alone with my weird brain and my messed-up thoughts that just won’t let anyone else in. Anxiety feels like the world is constantly crashing down around me, leaving me to float out into the abyss without a lifejacket or a safety net.

And then someone else comes along with the same issues... and you just can’t fucking deal.

If you haven’t already noticed, I’m not too shy when it comes to writing about my mental instabilities; I can write about it for days. However, I am incredibly shy when it comes to talking about it—or anything, really—in person. I can also read about it forever. I read people’s personal think pieces on the matter, listen to podcasts, revel in every story of broken brains and social anxieties, and just think, Yes. Yes, I get it. For once I’m not alone. I like to think of it as DIY therapy (this is not medically advised. Journaling is great, but please don’t disregard therapy in favor of blogging).

But actually dealing with it? Living with it from another person? That’s a completely different story.

I started dating my now-husband eight years ago this past November. He’s put up with more of my bullshit brain episodes than I care to count. Panic attacks, emotional breakdowns, silent treatments—he’s dealt with them all with patience and support. He’s never judged me for it. Never questioned me afterwards. Never got angry when I was being irrational. He just knows how to remain calm when I’m unleashing my neurotic hailstorm. He’s held me close after I cried into my pizza in the middle of a busy NYC eatery. He duct taped his car door handle in place after I ripped it off after a bad emotional breakdown.

These aren’t points in time I’m proud of and he knows that, and he’s never laughed at me or gotten angry at me after these episodes took place. He’s the rock. He’s the reasonable and benevolent force. He’s the sane one. But remember how as an aside I mentioned that “normal”-minded and, therefore, “sane” are subjective? It’s true. Just because you don’t see someone having a breakdown doesn’t mean they’re free from mental distress. Just because someone can have poise and muster up bravado in social situations doesn’t mean that they don’t have their own private neuroses and anxieties.

It wasn’t until we moved in together right before we got married that I started to see how much more alike we were. He’s the voice in our relationship. He’s the loud guy in social scenarios, the lead singer of his band, the showman. I’m the quiet one. That’s our give and take. He gets to be the mouthpiece. I get to be the quiet sidekick. He tells the loud dick and fart jokes and I, well, also tell dick and fart jokes but in a subtle, quieter way. He’s mentioned having his own issues and neuroses but I always brushed them off. Psh, sure you do. They’re nothing like mine… And then when we were sitting in the emergency room at 2 AM after he had a particularly bad panic attack, I realized his brain is just as off-kilter as mine. And I was pissed.

The feeling of isolation I introduced earlier? Here’s the thing about it: there’s a strange comfort in being alone. As scary as it is to be stuck with unhealthy thoughts, there’s also something about that feeling of floating into the void by yourself that’s freeing—you don’t want someone else jumping onto your raft when you’re sailing out to sea. Anxiety creates a form of fucked up escapism. Only you can understand (or not understand) why you do the things you do, what makes you tick. It’s selfish, really. And while I may read and listen to tons of other people about their issues, those are all ways to disconnect while connecting. There’s a screen between us, I can relate to them without having to actually deal with them, but when the person who’s freaking out is in your home, things get a lot harder to manage.

Watching someone else have a breakdown creates this weird sort of competitive streak in me. My present body is trying to be supportive, but my brain is thinking, Why are you freaking out like that, when I’ve got these things going on in my life and I’m not freaking out? I never have panic attacks this bad; why do yours have to be worse than mine? And, worst of all, I don’t have the time to deal with your mental bullshit right now. I’m tired. I have no excuse for this behavior. I have no excuses for these thoughts. I can only try to harness them and keep them as fleeting notions and not let them trickle into my actions.

A big part of my inability to understand things from his perspective is also because the sources of our anxiety are different (or at least seem to be).My emotional breakdowns and existential crises are mainly derived from feelings of rejection and failure. They’re also from thinking about losing loved ones in my life—either from death or just from separation. His anxieties often stem from thoughts of his own demise or health. Though, at the heart of it, the two sources really are the same: an immense fear of loss. Separation. Forced isolation. (See, it all comes around full-circle.)

When we took our vows, we said we’d be there for each other “in sickness and in health.” This is a perfect example of that. The vows should really be, “I promise not to be an asshole to you when your brain is malfunctioning.” He’s done an excellent job of upholding that promise since even before we got married—now it’s time for me to step up to the plate and do the same in return.

As much as I like to be alone, that’s not how everyone reacts to anxiety. And if I can recognize that in others when I listen to those podcasts or read those think pieces, then I can also start applying what I’ve learned to real-life scenarios. Understand his anxiety, not just try to view it through my own personal lens. Since that night in the hospital our dialogue about what goes on in our brains has been more up front. I’ve given him some tips I’ve learned over time on how to counter a panic attack. He started journaling what goes on when he feels an attack coming on. It’s made me realize that, again, I really am not alone, even if I think that I want to be, and that’s for the best.