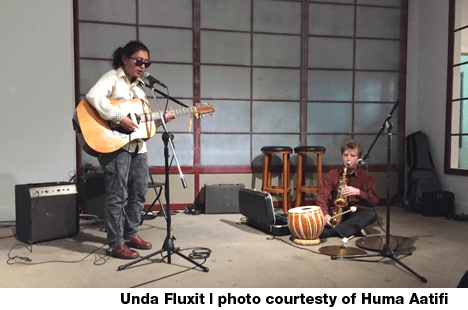 Huma Aatifi is a Boise, Idaho-based artist and musician.

Born in Kabul, Afghanistan, Aatifi moved to the United States when she was ten. Aatifi’s artistic pursuits are influenced by musicians and painters on the periphery. Unda Fluxit, a solo vehicle Aatifi started last year, is inspired by artists like Jandek and BJ Snowden. Unda Fluxit will appeal to fans of The Godz (from NYC), The Shaggs, and contemporary groups like Mordecai.

Unda Fluxit’s debut, Master of the House, will be available later this year. Gavin Swietnicki of Mordecai and Boise-based artist/musician Elijah Jensen-Lindsey appear on the album. Master of the House contains the first recordings Aatifi’s made; she only picked up the guitar a year ago.

In addition to playing shows around Boise with Unda Fluxit, Aatifi was recently commissioned to create the artwork for Daniel Ojeda’s play The Monster and the Gift. Aatifi is currently dividing her time between recording a follow-up release and painting.

Ryan: You were born in Kabul, Afghanistan.

Huma: Yeah. I came to the United States as a refugee in 2002. After September 11. Boise, Idaho, was a big place for refugees. They still host a lot of Afghan and Bosnian refugees. I’ve lived in Boise for a long time. Initially, we left Afghanistan in 1992 after the Mujahideen took over. The Soviets had invaded and left.

Huma: Right. And then the Mujahideen transformed into the Taliban. They ousted the president (Mohammad Najibullah) in 1992 so we left to Pakistan. We were in Pakistan for a number of years before moving to the United States.

Ryan: You would’ve been about nine or ten when you moved to the United States.

Ryan: How did your interest in art and music develop?

Huma: I always had a real interest in art and poetry, even when I was really young. I liked music. I had a lot of uncles who were also self-taught musicians. That’s just part of the Afghan culture. You don’t go out and get a degree. Knowledge is passed down by what’s called an ustad. You would learn music from somebody else. My uncles would buy harmoniums or tablas; they were playing music all the time. I grew up around that. Music is a new way to express myself. I started recording about a year ago.

Ryan: When did you start putting your art out before the public?

Huma: The ballet you had mentioned before the interview—The Monster and the Gift—I had been commissioned by the Morrison Center to create the art for that. I think the Morrison Center is owned by Boise State University. Those are some of my newest paintings. Before that, I had done a lot of sketches and other things. In a sense, I’m also a novice painter as well.

Ryan: There’s a symbiotic relationship between your art and music—a clear nexus. Often when I work with visual artists/musicians, I can’t easily identify a connection between the two media. An example where you can would be Mondrian’s Broadway Boogie Woogie (1943) which—although Mondrian wasn’t a musician himself—was influenced by jazz as well as New York City’s grid layout.

Huma: I hadn’t thought about that. That’s interesting. I guess there’s a common language there.

Ryan: You’re into artists like Howard Finster. Hearing your music and seeing your art, that makes total sense.

Huma: Howard Finster is amazing! I couldn’t believe his art when I finally saw it. I was driving with my brother and we visited the High Museum of Art in Atlanta. Finster had an exhibition there. He was a preacher and a self-taught artist. I like self-taught artists—whether they’re making movies, music, or art. They’re continuously riding the edge of constructs. Obviously, their work is almost always original and pushing the boundaries.

Ryan: There’s a lack of inhibitions.

Ryan: I speculate this also dovetails with what you had mentioned earlier about the ustad and that aspect of Afghan culture—passing traditions down through an oral tradition or an informal apprenticeship as opposed to rigid institutions like universities or conservatories.

Huma: Exactly. Irwin Chusid from WFMU had made a documentary with the BBC called Outsider Music. It’s so good. I discovered a lot of musicians through that film, but one of my favorites was BJ Snowden. She’s amazing. Chusid states that the outsider artists he highlighted have to be unaware of what they’re doing. That’s an interesting observation.

Ryan: Long before I was regularly on the internet, the big resource for outsider music was Songs in the Key of Z.

Ryan: I completely spaced it on that. That’s a great book, although it’s been about fifteen years since I’ve read it.

Huma: I need to get a copy.

Ryan: I used to order decks through CCS mail order. So, I was surprised to see you did a graphic for one of their skateboards. How did that happen?

Huma: CCS commissioned me to do a little graphic. The one that they used came to their attention at a friend’s house. It was a birthday gift, a pastel work. It’s an abstract figure. The person from CCS contacted me about using it. I said “sure,” but they cut off my signature. They also printed the design on a baseball cap; I really liked how that one turned out. They gave the deck and baseball hat kind of a cheesy name: The Huma Being deck.

Ryan: Can you talk a little about Unda Fluxit and Master of the House. These are your first recordings, correct?

Huma: Yes. I lived in Savannah, Georgia, for a few months about a year ago. I lived in a small apartment with my mom, so I couldn’t really paint. I had been thinking about doing music, so I bought a guitar at the local shop. It was a little Teisco guitar, made in Japan. That was really the start of it. I started playing with an electric guitar. Later on, I bought a 12-string guitar in New York. It opened up so many doors. I could express myself differently through music than I could through painting.

I got the idea to name the album Master of the House while reading Lorca’s book In Search of Duende. In it, he discusses the notion of duende which refers to “duen de casa,” a Spanish folklore which is a mischievous, rebellious, and fiery spirit that comes in a burst of inspiration. I feel like that is what happened when I started recording this album. The music came out in bursts. These ideas that I had which I put to music were ruled by the idea of duende, in a sense.

Ryan: That’s really interesting how you started playing music due to environmental constraints. It was organic and noble. If they’re honest, most people would say, “Yeah, impressing a bunch of people was also a big part of getting into music!”

Ryan: I envision Master of the House is a fairly autobiographical work, based off of the song titles and your mother being on the cover.

Huma: Yes. I had found that photo a few weeks before laying out the album cover. I thought it was such a mesmerizing photo. I didn’t edit it at all. Whoever took the photo—it was taken in Pakistan by maybe one of my aunts—somehow it worked perfectly. The way it’s so dark around the edges. I couldn’t stop looking at it. But, yes, that’s my mom and I’m the one in the shadows. I don’t know what symbolism there is to that.

Ryan: You’ve got the date stamp and everything on it. It looks like it was taken by an old disposable camera.

Huma: It was. That date stamp wasn’t added or anything. People do that nowadays to make photos look old.

Ryan: Gavin Swietnicki from Mordecai plays on the record. So does Elijah Jensen-Lindsey.

Huma: I met Gavin a few years ago. He moved to Boise from Missoula, Montana. We met by accident; I was meeting up with a friend at a poetry reading and I just started talking with him. We became really good friends. I asked him to play sax on one song; he also plays the sort of lead guitar parts on “American Dream.” Elijah is in another band here in Boise and I had asked him to play cello. Almost everything was first takes. I let both of them do what they wanted to. I didn’t give them any direction. They had listened to the songs before, but that’s all the preparation there was.

Ryan: You’ve been playing shows with Gavin too.

Huma: I have. I really like how he approaches music. We take a similar approach, I think.

Ryan: Being the drummer for Mordecai, that makes total sense.

Huma: Yeah, I think Mordecai is great. I met Elijah and Holt (Bodish) for the first time about a year ago. They’re great people. They’re fun to hang out with and I’m into their thoughts on music.

Ryan: What’s on the horizon, Huma? I know Master of the House is about to come out and you’ve been playing shows.

Huma: Since I graduated from college recently, I took some time off to work on my paintings and finish up this album. I was able to use money I had saved up. I’ve started applying for jobs full time. I plan to just repeat this cycle.