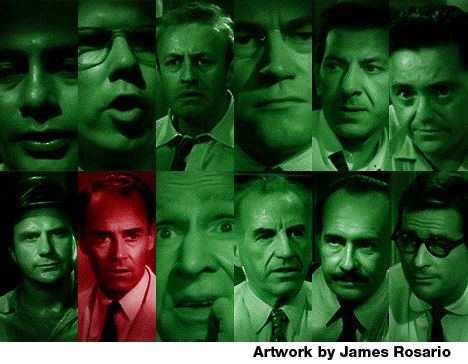 How “12 Angry Men” Got It Right, and Society Still Gets It Wrong

One Punk Goes to the Movies: How “12 Angry Men” Got It Right, and Society Still Gets It Wrong By James Rosario

Sidney Lumet made a lot of movies in his long career. 12 Angry Men was his first feature (after getting established in television), and what a debut. It’s a textbook on not only how to create cinematic tension, but on how our legal system should work.

A teenage boy (one of “them,” as a juror points out) stands accused of murdering his father. His guilt is presumed, as shown by the judge’s apathetic instructions to the jury. If convicted, he faces the electric chair. The jury of twelve “peers” also finds guilt a foregone conclusion—all save for one, that is. What proceeds over the next ninety minutes is one of the most compelling displays of constitutional rights a movie has ever managed. Its treatment and exposure of issues such as racial bias in the justice system was not only ahead of its time, but still painfully relevant today. It is, perhaps, even more relevant than it ever was, when one considers that over sixty years have passed with very little having been learned from these twelve angry men.

The jurors are known only by the numbers assigned to them—one through twelve. After a brief and toneless set of instructions from the judge, they assemble in a small upstairs room of the courthouse to deliberate. It’s a hot day, maybe the hottest of the year; it’s cramped and uncomfortable for everyone. A preliminary vote is taken, which discovers that a guilty verdict is not unanimous. Juror No. 8 (Henry Fonda) is the lone dissenter. He argues that, in the interest of fairness, they should take their time in coming to a consensus. A boy’s life is on the line, after all. As viewers, we know nothing of the case, the evidence, or the jurors, but as the film progresses, we come to learn a great deal about them all. Some are motivated towards “guilty” due to deeply held prejudices (Juror No. 10, Ed Begley, with the “one of them” logic I mentioned), while another (Jack Warden) wants to make a ballgame. Still others’ motives lie in pure logic (Juror No, 4, played by E.G. Marshall), insisting that the facts presented clearly lead to a guilty verdict. Another’s is based on resentments in his family life (Juror No. 3, Lee J. Cobb). He’s accused outright of being a sadist after he exclaims, “What’s the matter with you guys? You all know he’s guilty! He’s got to burn! You’re letting him slip through our fingers!” Whatever the case, Juror No. 8 insists on extinguishing reasonable doubt before sending a boy to his death.

This examination of testimonies and evidence is only part of the film. The rest is an examination of human emotion and decency. Juror No. 8 doesn’t let anyone off the hook, whether it be through poking holes in the “open and shut case,” or by forcing fellow jurors to take a hard look at themselves and their established convictions. He doesn’t presume guilt, as jurors are supposed to do. Too often, I fear this is not the case.

In one powerful scene (I use the term loosely, as the entire film is basically one extended “scene”), Juror No. 10, the bigot, goes on a racist tirade. One by one, the other jurors—even the ones who think the accused is guilty—slowly get up to turn their backs on him. When he’s finally told to shut up, he’s a broken and dejected man. With his prejudices now exposed, change is possible for him. It’s a terribly moving and important sequence. Like much about 12 Angry Men, it’s a pure, bold, unapologetic statement about our justice system. Sixty years later, people of color are still facing a system that not only assumes guilt, but hands down harsher sentences than ones given to their white contemporaries
.

The tension Lumet achieves, aside from the brilliant writing and acting, is through a very clever use of camera angles and lenses. He creates an increasing level of claustrophobia by altering focal lengths as the film proceeds. These lens changes create the illusion that the walls are closing in. By the end of the film, the angle of the camera has changed as well. It’s placed closer to the floor and tilted up, revealing the ceiling. The entire room gets smaller and smaller as the tension mounts. It’s an old trick used by filmmakers for decades to subconsciously alter and manipulate the viewer’s experience, an easy and effective way to control mood and atmosphere.

Upon its release in 1957, 12 Angry Men was met with critical acclaim, but not commercial success. This may have been due to the outdated black and white presentation, or that there is no “action” to speak of. Or, it might have struck a bit too close to home for many Americans. The twelve jurors are meant as a cross-cut of American society (women and people of color are notably absent, but that should come as no surprise given societal norms of the 1950s). With this cross-section comes a wide array of beliefs, both deeply held and easily swayed. The jurors are forced to confront these beliefs in uncomfortable ways, much like #MeToo, Black Lives Matter, and several other movements demand. Lumet and writer Reginald Rose are asking viewers, then and now, what Juror No. 8 is asking of his peers: to look deep within and analyze why these prejudices exist and where they come from. And more importantly, what exactly are we going to do about them once uncovered? I have no doubt audiences found this difficult in the late ’50s, as many still might today.

Adding to these uncomfortable realizations is the simple and terrifying notion that when eleven of these men walked into that room, they had no issues whatsoever about sending a young man to his death. Their consciences were clean, and their day had been only mildly inconvenienced. Juror No. 8 entered with a different attitude. He states over and over that he doesn’t know if the kid is innocent or guilty, but they should at least talk about it before handing in their verdict. He feels it’s their duty, at the very least, to give the prosecutor’s version of events a second look. To some, he’ll come off as a bleeding heart, but he’s not. He’s simply taking his civic duty very seriously. He only wants to be sure—something every single one of us would want a jury to be if we ever found ourselves in front of one.

In his 2012 article for AV Club, Mike D’Angelo supposes that the jurors in 12 Angry Men let a killer go free. He makes a compelling argument—one based on sheer improbability of events and juror speculation—but somewhat misses the point. He states that, “As stirring as it is to watch Fonda upend his fellow jurors’ assumptions and prejudices, their instincts were sound.” It’s possible D’Angelo is right, and they did let a guilty party go free. But his assertion that “their instincts were sound” is misnomer. I would argue that many, if not all of these instincts, are based solely on predetermination and personal baggage brought from outside the courtroom and not the evidence presented. Did they get it wrong? I don’t know. That’s for you to decide. But, for my money, Juror No. 8 casts enough reasonable doubt to render a “Not Guilty” verdict.

The Civil Rights Movement was in full swing by 1957, but the majority of white America was far from being on board. Movies like this aren’t created in a vacuum—they are responses to clear societal issues. 12 Angry Men is an indictment of a flawed system that prides itself on having no flaws.

As I write this, it appears that, in a matter of hours, the U.S. Senate will confirm an unqualified, partisan puppet, a disgusting pig of a man as the new Justice of the Supreme Court. Sorry Juror No. 8, but the system may now be broken beyond repair. I hope I’m wrong.