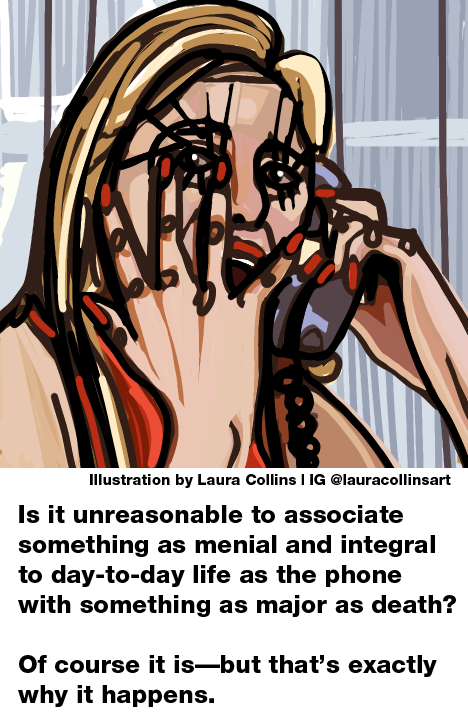 Hanging on the Telephone by Jamie L. Rotante

Hanging on the Telephone by Jamie L. Rotante

Being a neurotic, socially anxious person, there are a lot of day-to-day tasks most people don’t give a second thought to that become nearly earth-shattering crises to me. One of the most major things that plagues me to this day is the phone. Most people don’t jolt up like a meerkat every time the phone rings, then have to coax their stomachs back down from their throats once we know who’s on the other line and what it is they’re saying. I am not most people—though this wasn’t always the case.

I went through a phase when I was about eight years old where I became obsessed with the telephone. If It rang, I’d spring up from whatever I was doing (even if it meant missing out on some quality afternoon animated programming), and run to the kitchen to grab a hold of the phone before anyone could pick it up. It was more or less the pre-message board, child equivalent of “FIRST!” My over-eagerness to answer the phone was followed by awkward conversation—I never really thought it over past the introductory lines—but I still enjoyed being the first one to say hello. Fortunately, the calls were, more often than not, from telemarketers who would butcher my mother’s first and last names, not looking for much in terms of conversation. This did, however, provide me with a funny story to tell to my family after I hung up, and even in my tender youth I was a sucker for a funny anecdote.

And it wasn’t just answering the phone that gave me my jollies; I liked making calls, too. My uncle Frank informed me of a trick he’d heard about when he was younger: if you dial 6-1-1 before your home phone number, you’ll be able to call your own phone. The concept of being able to call myself was enthralling, so I would try often. Dialing 6-1-1 actually just called an automated customer service center, but that didn’t stop me from trying at least ten times a day, every day, hoping that one day I would be able to buck the system and make a breakthrough to finally achieve the goal of having a much sought-after conversation with myself.

It probably comes as no surprise that during one of my daily attempts, I wasn’t being as cautious as usual. My finger slipped and hit a wrong button. When I heard the phone on the other side start ringing, I thought my day had finally come—then there was a voice. Not my voice, but a man’s voice. “Hello, 9-1-1. What’s your emergency?” I panicked and hung up the phone, hoping that not enough time had passed for them to figure out who called.

It took less than a minute for them to call back. This was the first time I was not eager to immediately answer the phone. I ran into the kitchen to see my grandmother with the still-not-cordless receiver to her ear, confused. “Emergency? No, no one called from here about an emergency…” I had to silently mouth to her that it was me and I didn’t mean for it to happen. It was not long after that incident police dispatchers started taking mistake calls like that a lot more seriously—something I blamed solely on myself. That was my last foray into playing with the buttons on the telephone.

During those same years of my youth, I started to lose many older relatives who were close to me—quite a lot of them in what felt like rapid succession. Those calls were the worst. I’d answer the phone to a relative’s voice sounding a lot less cheery than I had remembered, forgoing small talk in favor of having me put an adult on the phone right away. That always meant some form of bad news. If it wasn’t a distant voice of a family member, it was coming home to a sad, hurried message left on our answering machine, following whatever joke answering machine greeting my mom and I had created. It got to a point where I could only associate the phone ringing with an announcement of death—and so each time the phone rang, I’d be downright frightened of what bad news was going to come from the other side.

I became conditioned; every time the phone rang, my heart sunk. I’d cower in fright, close my eyes, and pray for good news. This went on for years to come, until my family got caller ID, which allowed me to rest easy when I knew it was a frequent-caller family member or a telemarketer, only being worried when it was a number I didn’t recognize. Over time, I got less frightened, though I still wasn’t the best at making conversation. This became a slight disadvantage to me when I started working part time as a receptionist at my college’s Performing Arts Center. If someone called in with a question I couldn’t immediately answer, I’d panic, stumble over my words, then settle on providing most likely incorrect information because it would just take too long to find the proper response.

My worst experience came when a Q&A scheduled before a performance was moved to after the performance. I was tasked with cold calling all members of the Center—whether or not they were planning on attending—to let them know of the change. I had to breathe deeply and give myself a silent pep talk before each call before finally stumbling my way through the message. Despite my inadequacies in speaking, I grew less afraid of the phone—until one night when we received an alarming call: my uncle Frank had suffered a heart attack and was rushed to the hospital. Too afraid to go, I stayed at home and waited for news. This led to a week of waiting for the phone to ring until we received that final, upsetting bit of news. If there was ever a reason to hate the phone before, this further propelled my disdain for it.

Is it unreasonable to associate something as menial and integral to day-to-day life as the phone with something as major as death? Of course it is—but that’s exactly why it happens. Rational thinking often has to try and squeeze its way through the tiny filters of a neurotic person’s brain. My phone-related panic attacks aren’t as critical as they once were, but that’s not to say I don’t damn near jump out of my skin when the phone rings at work. Or that I don’t say a silent prayer when I feel my cell phone vibrate a few more times than it should if it were just a text message (in the cyclical nature of life, those calls are still usually from telemarketers).

Maybe one day I’ll get over this fear. Maybe new technology will come and make phone calls obsolete. It’s already starting to happen. And I’ll probably learn to fear that new technology, too, though I’m not there yet. As it turns out, receiving bad news over Facebook isn’t all that great either, but without having to speak, I don’t find myself constantly on high alert whenever my phone lets me know that I’ve received a new message or text. Sometimes, despite my fears, I do miss the days of my later youth when I embraced talking on the phone—namely hours spent going on and on about nothing to my friends. Now it’s replaced with a quick group chat message here or a dumb GIF there. As our conversation grows gnarled and more cynical by the minute with quick responses on email and Slack, I find myself getting that “get off my lawn”-type nostalgia for person-to-person talks, despite my relationship with the phone.

Until, of course, something goes wrong and I have to place a call to a bank or credit card company—then I wish all I could do is send a funny five-second video clip of a child throwing up her arms in confusion or a dog drinking coffee in a fire and let that do all the talking for me.