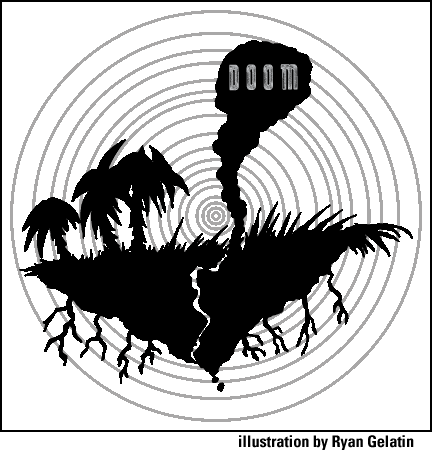 I’ve spent most of my life visualizing myself dealing with grief—which inevitably leads to an existential crisis and an immense fear of the possibility of having to actually deal with grief. Here’s the thing, though, I’m actually pretty good at handling crisis situations and that… scares me. Welcome to my never-ending circus of doubt and fear.

Here’s what I mean: Eight years ago I lost my uncle very suddenly—he was only forty-seven, and he left behind a daughter who was just about to turn eleven. Throughout my own childhood, imagining doomsday-type scenarios was a frequent obsession of mine. I thought about the horrible ways of both my demise and countless others could happen at any given moment (a byproduct of growing up in a house where Fox News was on a constant loop since the day of its inception)—but losing my uncle was never one of those thoughts. The week he was in the hospital before he passed, I never went to visit him. I was too scared, frightened by the prospect of having to hear bad news or having to see him in any condition that wasn’t happy, smiling, and alive. I stayed home while the rest of my family went. I paced around my empty living room frantically, my stomach in knots, praying the phone wouldn’t ring to deliver bad news but also biting my nails anxiously, hoping for an update. My heart leapt out of my chest when the phone rang and I had to stifle my anger and avoid slinging curse words at the unsuspecting, unaware telemarketers on the other end of the line.

Oddly enough, the news of his passing came over AOL Instant Messenger—from my cousin, his young daughter. No amount of mental prep could have prepared me to receive bad news in writing. The urgency and sadness in someone’s voice wasn’t there to give me a cue on how I should feel or react. Reading it made me numb. I had to read it aloud and say it over and over again before it felt real. And even then, it just felt like words and not much more.

After my uncle’s wake, I expected my life would be put on hold until I could pick up the pieces. But that didn’t happen. I went back to work and back to school. Life didn’t wait for me and I didn’t try to make it wait. Sure, there were sleepless nights and pangs of sadness, but the world kept turning. So I moved with it. I didn’t collapse. I kept myself busy and focused and pushed aside the feeling of near doom was gnawing away at me from the inside. That feeling would lessen over time, but it’s always there, just below the surface, ready to bubble over when given the chance.

That happened in October of 2008. Every autumn since, my favorite season is interrupted by my fear something terrible will happen. There’s no logic to it—just dumb superstition—but nevertheless my anxiety is at an all-time high in the fall. Every year I try to anticipate when the doom feeling will return and what will bring it back. It turns out, I can’t really predict tragedy. In fact, it tends to creep on me when I least expect it.

I was very close to my grandmother growing up. She was more like a mother to me, filling the void in my life my father left behind when he walked away from my own mother right before I was born. In 1997, my grandmother was diagnosed with kidney failure (an ailment she shared with her two sons) and had to undergo lifelong dialysis treatments. I was nine years old at the time, and it was the first time I became aware of my grandmother’s mortality. By that age I had been to many more funerals than my peers. Some of the deceased were family members whom I had forged close relationships with, but they were always “other” people to me. It still sucked, but the pain and sadness was always one step removed. But my grandma was nothing if not a fighter. She took on her illness like a trooper; going to dialysis and then going to work as a lunch mother at my school. Aside from the occasional weakness, it was hard to believe grandma had any ailments.

It wasn’t until a few stints in the hospital when I was in high school did I start to frantically worry. The thought of her demise crept into my subconscious, sometimes obsessively intruding into my thoughts even on the happiest of days. Over the years, a stroke, a staph infection, an incorrect prescription that landed her on a respirator, and various bouts with pneumonia derailed her well-being further. Almost all events occurred every other fall since my uncle’s passing. They were stark reminders of the little time we had left. I dreaded each and every hospital visit. I frantically checked my phone if I ever strayed too far from home, hoping I wouldn’t receive bad news. I’d be a ball of nerves until I found out she made it home okay from dialysis every other morning. But she was with us, and that was all that mattered.

And then she wasn’t. As strong as she was despite everything, her battles came to an end this past March. I’ve spent the better part of the last decade wondering what would happen when this day came. And then it did. It came. And it went. An hour after she passed, we had her funeral arrangements sorted out. Before the week ended, all of it was over. It all happened so fast. It was hard to process it all when in the thick of looking over insurance documents and contacting family and friends and arranging everything.

From the moment I found out she had passed (which, this time, was over Facebook messenger instead of AOL) to the day we picked up her ashes, I didn’t really have the time to stop and think about what was going on. That’s when it hit. What do you do when your biggest fear is confirmed and your constant source of worry is no more? There are a million things in the world for a person with anxiety to stress over, but when the big one comes, the rest all seem so silly, inconsequential. Instead, I returned to my static state of “now what?” on the island of doom. And with everything that’s going on in the world, especially in this current election season and political climate, doom seems about right for everyone. Just as before, I continued on with my life. I went back to work, back to the day-to-day. But with each passing month I feel guilty. Just as before, the world kept turning and I kept moving with it—but that just doesn’t seem right. Have I forgotten to grieve? To mourn? Have I been doing it all wrong?

No one is exempt from pain. Death and disaster strikes each and every one of us. As humans we all experience the same universal truths—but what makes us different and unique isn’t what we go through, but how we choose to respond. I don’t mourn conventionally. My grief comes in waves. The things that should make me sad—death anniversaries, holidays without loved ones, birthdays of the deceased—they don’t upset me. But, like tragedy, it’s nearly impossible to guess when sadness will strike. Grief exists in its own non-linear timeline. It waits for no one and it comes and goes as it pleases. Which is hell for everyone, but especially for anyone already dealing with preexisting anxiety and depression issues.

I’ve recounted the moments leading up to my grandmother’s passing over and over until it felt like I had memorized lines from a script, forcing a sadness into my voice so I didn’t sound callous when telling a new person who didn’t know the details. I am sad, dammit, but I can’t command it to come forth at will. But then I’m standing in the plus size section of a store, contemplating trying on a skirt, and I remember that I can’t show her and ask her opinion. Suddenly, I’m in hysterics, hiding behind a clothing rack so no one sees me crying. I look at old pictures of her and they make me smile. Then I’m eating Chinese food all by myself in a mall food court and I’m fighting back tears with every forkful of General Tso’s chicken. I think of fun times we had over the years and they make me laugh. Later, I’ll enjoy a burrito from my favorite Mexican place then come home to kick back, drink a beer, and watch a horror movie and it hits me: I won’t see her tomorrow. I can’t tell her all about my day. Suddenly, I’m choking and gasping for air, my face buried in my couch pillows so no one can hear my wailing. How can I explain that I’m still crying over the death of my grandmother when it happened six months ago? Why now and not then? There’s nothing I can say, so I experience my sadness all on my own, on my own private island of doom.

Sometimes I think my problem is that I don’t grieve or mourn the right way. Then, I realize that there is no correct way to mourn. We all do it but we all do it differently. And, as long as you don’t hurt yourself or others in the process, any way you choose to grieve is acceptable. It’s the one thing we’re afforded in this life and there’s something inherently beautiful about that.