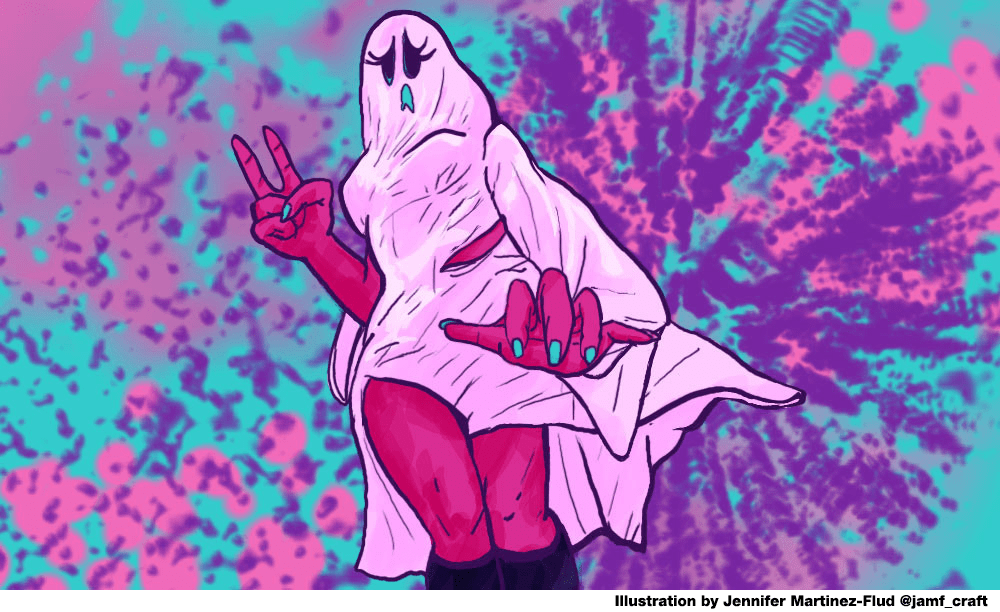 Giving Up the Ghost(ing) by Jamie L. Rotante

Did you ever notice that when you just want to get away from everything, everything comes at you full force? Those times when you just want to scurry home and hide under your comforter for days on end, only to have life and all its minions rip the covers off your sleepy head, dragging you by your feet back into its unwelcome presence?

You could say I’ve been experiencing a bit of that for the past, well, 2022.

I started off this year uneasy—I should say, rather, that I went into the holidays at the end of 2021 uneasy, afraid of what was lurking around every corner—only to be jump-scared by reality more times than I can keep track of since. I’ve touched upon this before, but I find myself occasionally of the superstitious nature, as much as I hate to admit it. I wouldn’t consider myself a big believer in numerology, per se, but I do give a lot of gravity to what numbers could mean.

No matter what’s going on in your life, just stop and breathe and take it all in. It doesn’t have to be put off until the “right” time. The right time is now.

Moreover, I have a weird thing about even numbers.

For as long as I can remember, I’ve associated “even” years with bad luck. Every time there was a loved one’s hospitalization, any incredibly rough patch—be it in work or in relationships—or some kind of tragedy, it always seemed to take place on an even year. Then 2020 happened, just further proving how true that superstition could prove to be, even on a global level. And as much as I try to convince myself otherwise, I can’t help but feel this sense of impending doom in the last few weeks leading into an even new year.

The end of 2021 was not an exception to this self-imposed “rule.”

December started innocuously enough. For the first time in a while, I got myself excited for winter, something I’d never done before. Seasonal affective disorder be damned, I was going to focus on the better parts of the colder months: warm sweater, the glow of Christmas lights, hot chocolate, and time spent with friends and family. Then Omicron reared its ugly head, and it became pretty clear that we’d be seeing some sort of repeat of last winter. But being newly boosted (along with all of my close family members), we were determined to spend time with our closest loved ones and celebrate together, albeit scaled down.

Then I got COVID.

All things considered, both me and my husband luckily caught “mild” cases (thanks, pretty entirely, to being boosted). At that point in time in New York, it was damn near unavoidable, but it did mean all of our holiday plans were thrown out the window. We made the best of it—we spent a whole week together, watching all our favorite holiday movies and cooking the groceries we had delivered. Our parents were safe. All in all, we made the best out of a crummy situation, but one that was far less bad than what so many others were going through.

But what I couldn’t fight off was that impending sense of doom. No matter how often I would try to shake it and convince myself it was silly, the holiday turning out to be less-than-stellar just felt like a warning. I wouldn’t have to wait too long before a family medical emergency on New Year’s Eve confirmed that the start of this new “even” year would be rocky, at best.

These first few months of 2022 have been turbulent. Hectic. Challenging. And the “break” of the holidays was not nearly enough to brace me for the burnout I’d face in the new year. I’d done it. I’d willed all the negative thoughts I had about an even year into existence. I was so set on things going south, I propelled them downward, pulling me into hell with it.

Of course, that’s not how things work. And once I made peace with that, I started to embrace another thought: better to get through the worst at the start of the year and hope for the best for the rest. I’ve set my intentions clearly on rising up and moving forward and upward with grace, a decent amount of humility, and strength. I’m willing to bet on myself and not just survive, but thrive.

If only everyone else would just leave me alone.

And therein lies my problem. Whenever I’m dealing with stress, taking on a lot more than I can handle, or otherwise just feeling beaten down by life, I tend to retract myself. Messages go unanswered, calls aren’t returned, plans (even virtual ones—okay, mostly virtual ones) are canceled. Tasks aren’t checked off my ever-growing to-do list. Sometimes I believe that when you’re going through hell, you just gotta keep going. But sometimes that “going” gets tough, yet the tough doesn’t get going. And all I want to do is focus on something mindless and turn off all the outside noise.

It always seems like at these times everyone comes out of the woodwork wanting something—my attention, my help, just my presence. People expect me to pour out of a drained, depleted, and dried up cup. Of course, it’s not some coup staged among every person I’ve ever met and interacted with to get under my skin when I’m the most exhausted—instead, I’m just noticing it more because I’m trying to hide. And, trust me, it’s not the people seeking me when I’m hiding that makes me feel overwhelmed—it’s the guilt of pushing so many people away without warning or reason.

Sometimes I wish I could just put up an old school, AIM-style “Away” message that lets everyone know I’m not available until further notice. Maybe some cryptic lyrics to keep people guessing if I don’t feel like being upfront with what’s going on (even if it’s not nearly as bad as I make it to be in my mind). I don’t want to leave people feeling ignored, cast aside, or forgotten. But I can’t muster up the strength to reach out, make plans, circle back, ping. So it adds onto my already weary shoulders. And when people show me mercy for my absent-mindedness, my disappearing acts, my flakiness, it makes me feel as if I don’t deserve their friendship or their kindness.

So how do I find a middle-ground here?

A recent article published by NPR discusses how, instead of distracting ourselves, it’s better to pay close attention to what’s going on. We pick up our phones and scroll to distract ourselves instead of being mindful of what we’re dealing with—the good and the bad. Jon Kabat-Zinn, the founder of mindfulness-based stress reduction (MBSR), says that the best place to start meditation and mindfulness is right now. No matter what’s going on in your life, just stop and breathe and take it all in. It doesn’t have to be put off until the “right” time. The right time is now.

Maybe that doesn’t have to only apply to meditation. Maybe that means answering that friend’s text (I’m already scrolling aimlessly on my phone, I’m 85% of the way there). Maybe that means finally getting my shit together and responding to that important email, even if it’s only to say “I haven’t forgotten about this.” Maybe it’s accepting with grace people’s kindness and empathy, instead of building a wall just so I can sink further into self-pity. Maybe it’s saying now’s the right time to start that project, because it’s the kind of distraction that’ll be fruitful and end in completion, a sense of peace in a time of turbulence.

Now’s the time to stop ghosting and start living.

…or in a little while, because I’m exhausted and need some sleep.