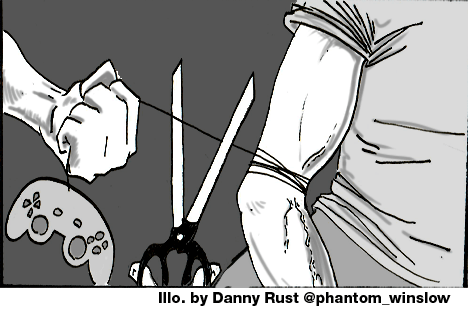 Gaming Disorder: Pulling Back the Digital Curtain by Will Kenneth

When the Lawrence Arms announced the dates and lineup to the fourth annual War on Xmas show, I noticed my own calendar aligned perfectly. I bought tickets when I realized this gave me an excuse to knock a line off my bucket list and to hang with an old friend. As someone who rarely travels, booking this trip felt like a big deal.

The last time I was in the area was also the last time I got on an airplane. In June 2015, I went to Botcon, the official Transformers convention. I got to hang with a bunch of grown-ass nerds, and we talked about robots and partied past my old man bedtime. When we moved our party outside, the Midwesterners were walking around outside in shorts and T-shirts while I was bundled up in my All hoodie and shivering.

I may be a proud New Yorker by birth, but living in Florida for nearly thirty years has made dealing with weather below sixty degrees feel like I’m slogging through unexplored arctic tundra, and now I want to go back to Chicago in December? I hadn’t seen a serious winter since I was six, and I definitely haven’t driven on icy roads.

Dropping this Floridian in a car seemed like a disaster waiting to skid off the roads, but putting myself through that would be worth it to see friends, catch some great bands, and drive outside of the city to reach the Galloping Ghost Arcade in Brookfield.

Oh yeah, that’s right. The real reason I was going to Chicago was to get to the arcade loaded with nearly seven hundred games (a milestone they’ve since surpassed) and knock it off my bucket list. Punk rock and good friends were just a cool bonus (and a way for me to segue into this column).

The truth is that I play a ton of video games. Even with balancing a family, a full-time job, and a Razorcake column, I still sneak in a good five to ten hours a week to fire up my PlayStation 4 and retro consoles.

I have to admit I haven’t always had a good balance with video games, and I didn’t realize that until recently.

Last year, the Borderlands Facebook account shared the first magazine writeup the original Gearbox game received in 2007. This excerpt about gameplay design caught me off guard.

Gearbox is specifically structuring the game so that players will always be juggling several quests of varying length and complexity. “We’re encouraging the player to just play five more minutes to get something new,” says Hurley. “Sometimes it’s just a new gun, sometimes you finish a quest, and sometimes it’s another piece of the story that clicks into place.” This simultaneously allows players to make meaningful progress even in brief bursts while also encouraging the “just one more” kind of gameplay that can unintentionally lead to marathon sessions.

Here the developers give away the secret sauce: Video games are designed to keep you hooked.

Honestly, I was shocked. Somehow, something that felt like an innocent hobby suddenly felt predatory. Disgusted, I put the controller down for more than a month.

In that time, I learned video games use feedback loops to keep you engaged—like when you eat ghosts in Pac-man or get 1-ups in Super Mario Bros. Those are in-game rewards for your progress, and when combined with lights and sounds they will stimulate the natural release of dopamine in your brain.

Over time, games became more sophisticated and so did game designers’ ability to keep us engaged with feedback loops. I’m too embarrassed to admit how much time I’ve sunk on Borderlands 2, but I will say it’s probably more than any game I’ve played, and I’m still not done exploring all that the game offers.

Looking back on more than thirty years of gaming, I don’t know if I can put my finger on the exact moment home console video games felt predatory. Maybe they always were.

I’ve been thinking about the Copyrights song “Crutches” lately. The chorus line, “All of my crutches are breaking my bones” hit home here. My favorite escape may be a problem I need to escape from.

After doing some reading, I learned not everyone is an agreement about gaming addiction. The World Health Organization (WHO) recognized gaming disorder as a public health threat in their medical documentation ISC-11, which they formally adopted May 25, but the American Psychiatric Association (APA) is undecided whether gaming disorder is its own disorder or a subset of something else. Regardless of how gaming disorder is categorized, the effects of addiction are still real.

• Preoccupation with gaming
• Withdrawal symptoms when gaming is taken away or not possible (sadness, anxiety, irritability)
• Tolerance, the need to spend more time gaming to satisfy the urge
• Inability to reduce playing, unsuccessful attempts to quit gaming
• Giving up other activities, loss of interest in previously enjoyed activities due to gaming
• Continuing to game despite problems
• Deceiving family members or others about the amount of time spent on gaming
• The use of gaming to relieve negative moods, such as guilt or hopelessness
• Risk, having jeopardized or lost a job or relationship due to gaming

Talking with my counselor, she says something is addictive if it impacts your ability to keep a functional balance with work and other responsibilities. You look at the entire picture of symptoms to understand if someone is addicted, and one or two symptoms may not be enough to confidently diagnose someone. Knowing that, I still identify with a few of these and that made me a little uncomfortable. I hope that by recognizing them in myself, I can develop a healthier relationship with my hobby.

My trip last year to the Galloping Ghost was part of my interest to seek out bigger, better experiences that I can’t have at home (#3 tolerance). In the end, my trip wasn’t unreasonable; I set aside money and time to do it, and it didn’t impact other activities I planned.

But at home, the trip was part of a larger pattern where I’m also frequently looking for obscure and rare titles. I’ll study fan sites, and scour eBay and local game stores for region exclusives from Asia, Europe, and South America. I have a substantial backlog of games I don’t play, so I don’t need to add more, and I’m suddenly not going to get an influx of time to play them. You can apply that to any other kind of collecting habits for books or records and still get the same result—buying stuff you don’t have time to appreciate and enjoy is worth reconsidering, no matter how scarce the item is or good of a deal you’re getting. To be fair, I need to take some of my own advice.

Instead of acknowledging and working to understand emotional stress, I tend to immerse myself in games instead (#8 games as an escape). All that anger I had from being abused by my dad—if I wasn’t channeling that rage into writing or playing in punk bands, I was gaming. When life threw me curveballs, I leaned on games even harder.

When I was younger and working for The Gainesville Sun as a copy editor (and occasional contributing writer), we were told in advance they were going to cut a few of us from the copy desk (we were responsible for page layout, proofing, and writing clever headlines). Sure, I created a resume and applied to jobs once I knew I might lose mine, but I also bought Final Fantasy XII and waited out my impending doom by slaying monsters in an engrossing fantasy adventure game, which I did to the exclusion of pretty much everything else. (Spoiler: I got cut, and I haven’t played FFXII since).

Fortunately, getting counseling has helped me understand my emotions, and developing that emotional intelligence has made me less inclined to dive into a game to escape emotions I didn’t know what to do with.

The rest of the bullet points don’t apply to me as much. Sure, I’ll think about games when my mind wanders (#1), and sometimes I feel irritable when stepping away from marathon sessions (#2), but I never feel like I have to lie at about playing video games (#7), and it’s never been a weight on my marriage (#9). With Borderlands 3 dropping later this year, I told my wife that I’d like to plan time to binge on it for a few days, and she said she appreciated that I warned her months in advance. That way we can work together so my gaming doesn’t feel like a burden on our family.

Fortunately, recognizing these signs have helped me moderate my intake, but I understand moderation doesn’t work for everyone, and some people need to walk away altogether.

Counselors can help you identify if you have gaming disorder, and can recommend treatment. I realize healthcare in the United States is expensive and not everyone can get it, but if you can afford it, and you believe you need it, you should go. You deserve to get help. Seeing my counselor out of pocket is $70, which is just $10 more than buying the latest AAA big budget blockbuster game. And yes, you may want more than one visit, but please consider the cost of one more game versus not getting help at all.

You can also reach out to Online Gamers Anonymous (OLGA), which is a 501(c)3 that offers a twelve-step recovery program and online chat rooms where you can find people tackling this too. Computer Gaming Addicts Anonymous also offers similar community-minded approaches for people interested in quitting.

Redditors also put together r/stopgaming as a support group for gamers trying to quit. Though I don’t subscribe myself, the discussions seem lively and supportive.

I know it may be hard to accept that something you enjoy and maybe even take pride in could be harmful for you. Video games brought me so much joy through the years and have helped me through challenging times in my life, but I have to recognize they’re seductive for a reason. If you can relate to some of these symptoms (and it doesn’t have to be video games), you may want to reconsider your habits, too.