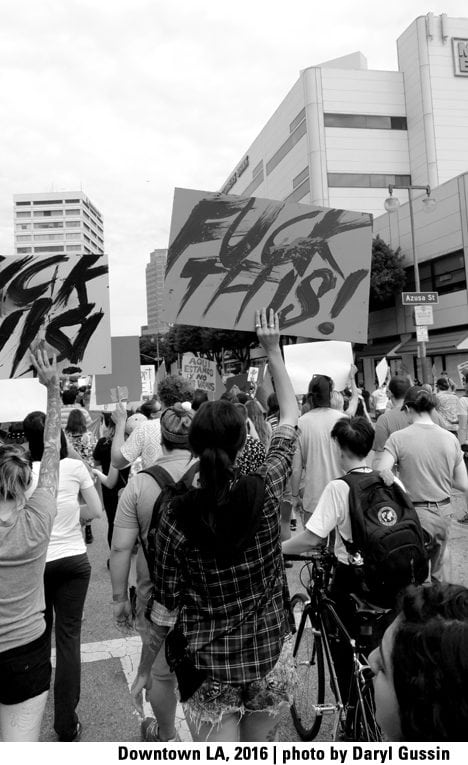 Let’s just make this clear. Seriously, fuck Trump. He’s a man who doesn’t deal in subtlety or nuance and often contradicts himself. Trump’s machine was able to convince around sixty-three million Americans to vote for him. The next four years are a total crapshoot and any idea of “social progress” on a national level looks grim. Creating a national “watch list” for Muslims, building a ridiculous wall along America’s southern border, slashing taxes for the one percent, threatening the federal enforcement of Roe v. Wade—these are horrendous election campaign promises. Even if he can’t pull off any of these digressions, he sets the tone at the highest American political level. He’s a symbol that it’s okay to be a bully and an asshole. I really thought we, as a nation, were turning a corner away from emboldening white supremacists.

I would like to thank science fiction—Orwell, Philip K. Dick, and Octavia Butler in particular—for preparing me for dystopian futures. When Trump announced his bid for the presidency, I took it as a serious, credible threat. I live in California. It’s a state that put Reagan, a monkey-accompanied B-movie actor who was a friendly witness for the communist-baiting McCarthy hearings and Schwarzenegger, an Austrian bodybuilder actor who had a years-long affair with his family’s housekeeper and fathered a child with her while still married to his wife, into public office. We’re a nation that regularly mixes up fiction and non-fiction, verifiable facts with wild assertions, that muddles the-first-fucking-thing-that-comes-to-mind with viable, long-term governmental policy.

I grew up largely in small, rural towns in the Southwest. I came of age during a wave of punk rock in the mid-‘80s that severely distrusted institutions—both public (the government) and private (large corporations/major labels), while providing a viable alternative with DIY. That period of time deeply informed how I continue to conduct my personal life. I have no personal social media accounts. (Razorcake does, and they are administered by our volunteers.) Instead of being a closed-off hermit, I value both the face-to-face time I spend with my friends and family, and the time I spend alone. I’ve taken the time to create space to think things over and look at the long views instead of blitzing myself with a continuous barrage of hyperbole-driven junk food media. (Right and left.)

I don’t think people are stupid, but I do think fear is a pervasive manipulator that digs under text, words, and facts; obliterates them. People who live in fear don’t want to—or need to—hear explanations or understand root causes. They want the pain to stop. They’ve been ignored. They want their immediate station to improve. I understand that. But this time, they voted for a sexist, racist, classist asshole who has the full ability to snip critical lines of America’s safety nets and drive the nation off a cliff.

Eleven days before the election, California released the short list of viable write-in candidates. (If a voter wrote a candidate’s name in on a ballot, the vote would actually be tallied.) Since California was going to fall for Clinton, I voted for Bernie Sanders. I know how the electoral college works. My civic action casting a vote for president was merely ceremonial.

Making Razorcake for the past sixteen years isn’t ceremonial. It’s a deliberate act. One that is highly personal. It takes an incredible amount of energy and organization on a very limited budget. It’s hard work. It’s physical labor. It’s also a project—and a small, living symbol—that includes some of my favorite people on the planet who are in Trump’s crosshairs right at this moment.

RESOURCES – These are sources that I trust and listen to regularly. They provide in-depth, long-term, fact-based coverage of politics.