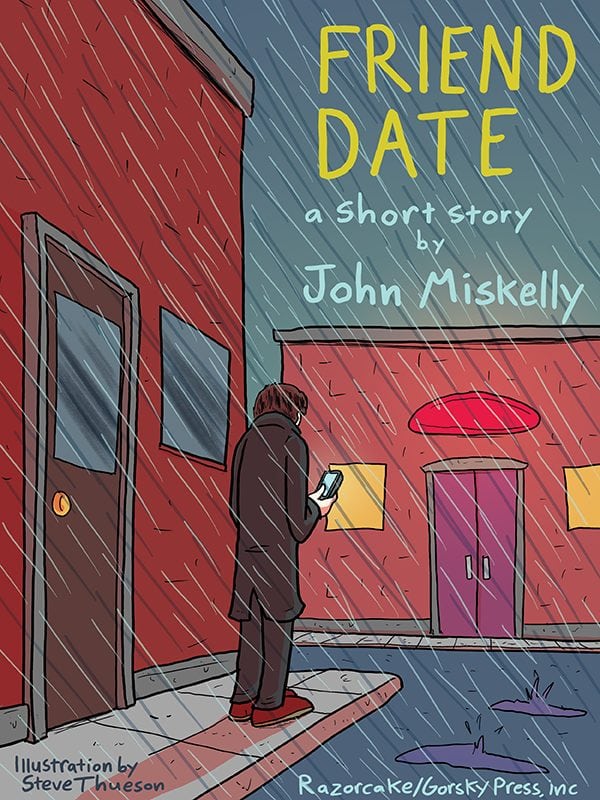 Greg was married with a less-than-one-year-old and thus was unlikely to stay out longer than two rounds. He and Ewan sat two desks along from each other in the office, and by now things flowed easily between them. They spoke often during the day and had had six or seven visits to the same pub in the four months they’d know each other. All in all: familiarity. Lloyd, on the other hand, was a lengthy half-an-open-plan-office’s distance away from Ewan and their paths rarely crossed. They didn’t even share the same kitchenette.

Ewan could meet Greg at the usual place at the usual time and then catch up with Lloyd later that night. It’d be a good warmup to wherever he’d meet Lloyd, which would no doubt be a place deeper into the center of town and possibly with a set of friends Ewan didn’t know at all. It would be awkward in the first few minutes, but a bit of pre-imbibed Dutch courage and some solid face time would offer a good chance to consolidate the beginnings of a friendship with Lloyd, or at least push things over the hump of mere acquaintances on good terms. From the few scraps of conversations they’d shared, he’d felt some potential with Lloyd, a suggestion of a shared sense of something. But without a bit of effort, one could wallow in that relationship no man’s land for a short-term contract’s worth of time, only finally making a deeper connection in the last hour of the last day’s leaving drinks.

Greg was visibly tired when he arrived and made his two-pint pronouncement on arrival. He seemed hurried. They had the now customary exchange re: Greg’s baby son, and had a fluid and honest chat about this and that. Something about work or Hitler probably. They paid, making the routine small talk with the barmen.

Greg left and Ewan wondered what to do with the baggy dead time between Greg’s departure and Lloyd’s text saying where they might meet. He walked in the direction of the town center, changed his mind, rounded the block, and returned to his house. He grabbed a raincoat to protect him from the light rain that had begun to fall. For a moment he considered changing his shirt, then walked to the kitchen and snacked on a piece of bread. He returned to the living room and sat and fidgeted until, finally, Lloyd mentioned a restaurant bar in town, Rio Verde. He gave the address, then its location related to a mutually known bar on the same street. He mentioned he was with Molly, a woman four desks down from Ewan, who he’d had a vague interest in since starting at the company but had, as far as he could remember, neither articulated or acted on in any way. He left the house, and the rain grew heavier. He raised the hood of his coat and walked.

By the time he reached the halfway point, it had increased to a torrent. His shoes were well on their way towards soaked, and the water collecting on the hem of his parka was seeping into his jeans and working its way down his thighs. He sheltered under an awning. To kill time, he sent a wry text to Greg making light of the situation.

Two more texts arrived from Lloyd, slightly bleary through the raindrops. Same name—Something Verde—and more details on the location. The same street mentioned again. Strange, the repetition. He shoved his phone back in his pocket before the rain fried the electrics. The drops were hitting the asphalt so hard it was splashing his ankles, and he backed farther under the awning, then right onto the doorstep.

It didn’t stop, but it did at least slacken, so he took his chance and ran for it. Ewan slowed to a speedwalk as he neared the number, thinking about greetings and whether he should sit down first or stay standing and offer to go to the bar for a round; drape his sopping coat on the back of a chair or look for a hat stand; order food even if they’d already ordered substantially earlier; or risk being plate-less while everyone else ate. Suddenly he realised he’d walked past the place and backtracked.

The place was shut. More than shut it was closed forever, wooden boards on the window saturated with water, fly-posted bills turned to soupy sludge and dripping onto the pavement. Only the sign remained to give any indication that it was once a place called Rio Verde.

A conclusion gradually descended on him that turned his blood black with shame and hurt. Was this the reason for Lloyd’s detail, a tugging of the lure to draw him to a place that didn’t exist, to humiliate Ewan purely for having the gall to try and expand his own universe and share it with others? He’d been pranked. So much for good faith and reaching out. His blackened blood boiled in his veins as he envisioned Lloyd at home, cozy and dry, laughing at his own wit and mischievousness, and completely oblivious to the hurt he could cause, sheltered as he was by his own gregariousness and a network of friends garnered over decades in the same place. To Lloyd, he’d subjected Ewan to nothing more than a twenty-minute walk through town in torrential rain inflicting at worst a minor cold. But to Ewan…

And Molly—had that been part of the bait? How could he have known? Had he observed Ewan’s subtle observations of her? Did he read something in the way Ewan spoke to her? Was this a vindictive knowing wink to Ewan that he saw him, knew him—could work him as he wished. Another way of showing his social Darwinist superiority.

The Fucker. Fucking asshole. They barely knew each and were months away from justifiably playing pranks like this. Fucking shitting sneaky prick.

How could he respond? Could people tell when you blocked them on one’s phone? Ewan found himself savoring just the imagined image of Lloyd discovering the retaliatory gesture. Should he send a message now, a no-holds-barred admonishment? Or resort to the good old fashioned silent treatment? Or tell everyone at work except him; let it slowly seep towards him via the rumor mill?

He was still standing in the doorway—dripping wet, sensing the judgement and pity of the scurrying couples and groups laughing in the face of the weather, on their way to and from their gatherings of shared and intimate experiences—when a pertinent word struck him from farther down the street on the opposite side of the road.

Rueda Verde, on a neon sign above a window obscured by condensation but dancing with light and life.

Slowly he crossed the road and stood outside, watching the shapes behind the glass move and the muffled sound of chatter emanate from within. He could see but couldn’t make out the details.

He checked his phone. It wasn’t repetition Lloyd had sent, but a correction. Rio Verde. Rueda Verde. The same message slightly altered. Same street, different prepositions of place. One was “river”—he knew that much from secondary school geography. He felt a new kind of shame, not of gullibility or victimhood, but reactionary judgement. The self-hate of self-pity. The self-hate of being so easily hateful.

Somewhere in there was Lloyd. Not hoping or even actively waiting, but at least maybe expecting him. But Ewan couldn’t go in. He thought about the journey from the door to the group, the tables and eyes and gazes he’d have to negotiate on the way. He thought of the minor dilemmas he’d contemplated earlier that had grown in stature and now seemed insurmountable.

He sent a wry text to Greg making light of the whole thing, and then turned towards home.

John Miskelly is thirty-two and lives in Asturias, on the north coast of Spain where he teaches English as a foreign language.