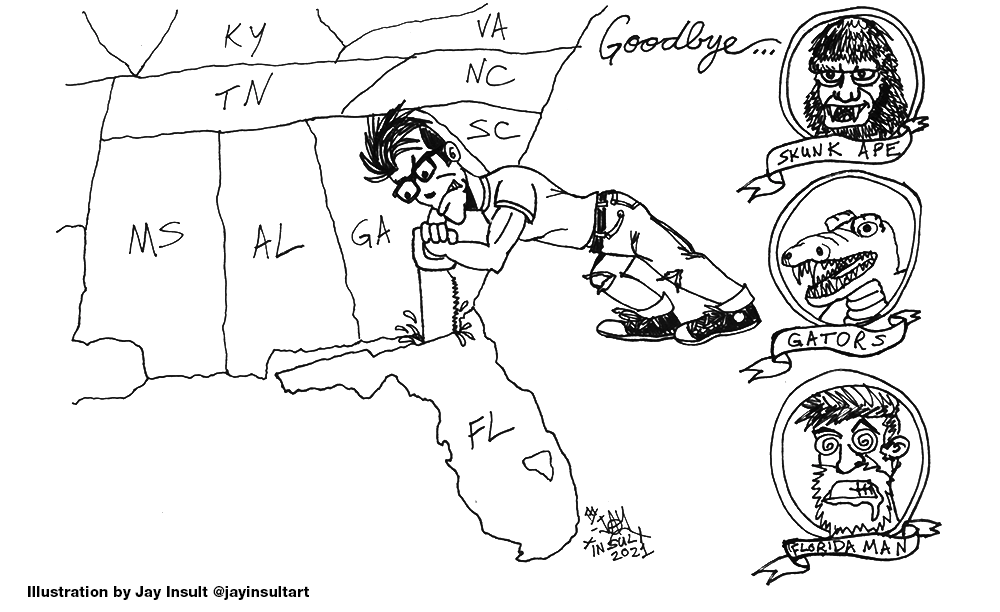 Florida: The Review by Will Kenneth

If anyone asks, I tell people I’m from New York City. Never mind that I only lived in Manhattan until I was six years old and then spent the next thirty long years in Florida. I’m a New Yorker, damn it.

That line might work in Jacksonville, but when I move back to NYC this summer, I know deep in my heart my fellow New Yorkers will see right through the Florida Man in me.

My best friend is Skunk Ape and my next-door neighbor is a manatee. My wife and I built our first house out of sawgrass, and we sent our daughter to school with a bunch of opossums because they had the highest rating on GreatSchools.

When I was a kid, my school held an assembly so we could hear from Okefenokee Joe, who I swear on the grave of Joey Ramone is a real person who I think about almost every day. He lived in the Georgia swamps and taught us about being “swamp wise.”

He sang us songs on his acoustic guitar in between stories about his dog who got eaten by an alligator because, you guessed it, he wasn’t swamp wise.

Our school didn’t just bring in a folksy swamp man to teach us about swamp safety because they thought we were all going to take up residence in the Everglades; we really had to worry about alligators.

Alligators are mobile and will travel between ponds, and they have zero issues eating people who get too close to the water.

We’re taught alligators can run faster than you, and if they’re chasing you, you should zig-zag because they can’t pivot well. I’ve never tested this, and I’m pretty sure it’s bullshit, but I’ll probably end up in an alligator’s death roll long before I could remember what Okefenokee Joe taught me.

Alligators are a real threat in Boca Raton where I grew up, I mean, where I conveniently lived until I turned eighteen.

My mom’s last rental house has warning signs to watch for alligators along the sidewalk path next to a man-made pond. Sometimes you can see their eyes resting above the water.

At the University of Florida in Gainesville, you can go see a whole fleet of alligators just hanging out in Lake Alice. They lost their fear of people after students in the ’70s and ’80s started feeding them. (Google tells me a group of alligators is actually called a congregation, but that’s way too stuffy.)

We also have a bunch of invasive reptiles that made South Florida their home. In the early 2000s, you could see a family of reptiles the size of golden retrievers sunning themselves behind Florida Atlantic University. The backroad has since been rerouted, and even though I haven’t seen them in a decade, I like to imagine the lizards just moved into someone else’s backyard.

During Fest, you could always identify a tourist by the way they fawned over our adorable, regular-sized lizards running around downtown Gainesville. Besides carrying salmonella, these lizards are mostly harmless, but not everyone knows that.

“You have to watch out for them,” I’d tell them, regardless of what’s true. “They’re bloodthirsty.”

“Really?” one wide-eyed tourist asked me.

“Oh absolutely,” I said, delighted that someone took my bait. “They’ll jump off trees and gang up on you if you upset them.” I was making this up on the fly.

“Yeah, I saw this happen to a kid one time. They swarmed him, and when they were done, there was nothing left but a mist of blood and bones,” I said, hoping she’d finally catch on.

“Really?” she said without a hint of awareness that I was completely embellishing this whole thing.

I started to get concerned I sold this lie too well. “I’m kidding,” I said, finally letting on that I was trolling.

I ran off right after to catch the next band I wanted to see, and come to think of it, I never saw her again. I hope she wasn’t eaten by lizards.

Our weather is wack, too. I haven’t seen snow fall in so long, I’m beginning to believe snow is a conspiracy from the auto industry to sell us new tires, and I haven’t seen evidence to prove me wrong.

In South Florida, you have two seasons: hot and hotter. If you’d rather spend Christmas morning working on your beach tan than spending it with family, keeping up a lie that a shitty allegory for god will break into your house and leave gifts for children and no one else, well, you can do that.

If you want to, you can retire to a secluded retirement community in middle of the state where you can get anywhere on a golf cart and then realize, “Oh shit, nothing happens here and I’m bored,” so you decide to have unprotected sex with multiple partners as the only real entertainment you have while waiting for your mind and body to decay. I don’t recommend that one, but somehow more than 100,000 people live in The Villages, and they think it’s fucking great.

If you want to set everything you own on fire, grab your dog, move into the Everglades, ride a fan boat to work, and spend the rest of your life writing folk songs about alligators and how palm trees that don’t have coconuts aren’t native to South Florida, you can do that, too.

Before the pandemic I expected to die in Florida. Not tragically or anything like that. I expected to go like the retirees in The Villages: playing shuffleboard, swinging golf clubs at alligators I’m too slow to run from, and riding golf carts to get to the next swingers mixer, blissfully fucking my days away until the sea levels rise and calmly swallow us all.

But I’m done now. Thirty years was long enough. I’m going to miss my friends: the native lizards, the invasive ones, alligators, and my fellow Florida Man.

Your state probably has just as many Florida Men, but our Sunshine laws make much of our government meetings and arrests public record, giving journalists everything they need to write stories about us when we fuck up and the cops get involved (caveat: cops lie and crime beat stories are typically one-sided from the police’s perspective).

Crime doesn’t explain away our recent Florida Man winners, like the school administrator who awkwardly censored young women’s cleavage in yearbook photos, our lawmakers who repealed building regulations that could have prevented the Miami condo collapse, and the city of Jacksonville responding to a predominantly Black festival by making more room in our jails and closing up businesses downtown.

I’m not here to dunk on Jacksonville, where I’ve lived for a decade. That’s far too easy. We’re often the punching bag for jokes, so here’s some cool shit that makes living here bearable.

We’ve got a great independent movie theater at Sun-Ray Cinema (I regret not grabbing their Black Flag logo parody shirt that used film reels in place of the iconic bars), some wildly good record stores like Tiger Records, and the oldest skatepark in America at Kona, which also doubles as an all ages DIY space, so that fucking rules (though I’m not ready to go back to shows in Florida).

I was excited to go to the Duval County Comic and Zine Fest hosted by our public library downtown, which got canceled at the onset of the pandemic.

This past year I learned the downtown public library also has a substantial zine collection, including a stack of Razorcakes. I was planning to visit once the pandemic subsided, but given that the vaccination rate in Duval lags, and most people refuse to wear masks inside, I’ve been reluctant to go in person.

But what makes me laugh is when people tell me “to stay safe” when moving to New York City, even though you’re roughly 2.5 times more likely to get murdered in Jacksonville than you are in New York City (based on 2020 murder stats; population numbers were taken from the Census Bureau population estimates for 2019). After all, Jacksonville is the murder capital of Florida.

Never mind getting murdered, you’re far more likely to catch Covid in Jacksonville than you are in NYC. As of July 18, Covid-Dash.net lists Duval County as the second worst county for Covid outbreaks in the entire country. Not a single county in New York state even touches that list right now. On a statewide basis, Florida is ranked #3 for worst outbreaks and New York is #33.

These Covid infection stats don’t surprise me. Not many people seem to give a shit about wearing masks or staying safe from the coronavirus. I’ve got people in my Covid bubble with autoimmune disorders, and I’m frustrated that the community response to protecting them was basically “fuck ’em.”

I could go on about how our governor forbade masks mandates and vaccine passports, turning saving lives into a culture war circus, but I’m done. I’m really done with it. The Covid infection stats speak for themselves.

Florida hasn’t been the worst home for thirty years. It’ll be tough to leave behind my friend Skunk Ape and the raccoons that hiss at me when I try to make small talk with them at night.

I don’t know if the NYC subway rats will accept me as one of their own, but I have to remind myself that I belong down there, too.

And if I ever get lonely and miss the humid, swampy summers, I can commiserate with the sewer alligators, who are definitely all Florida expats.

Goodbye Florida. You were only okay. I hope Orlando sinks first.