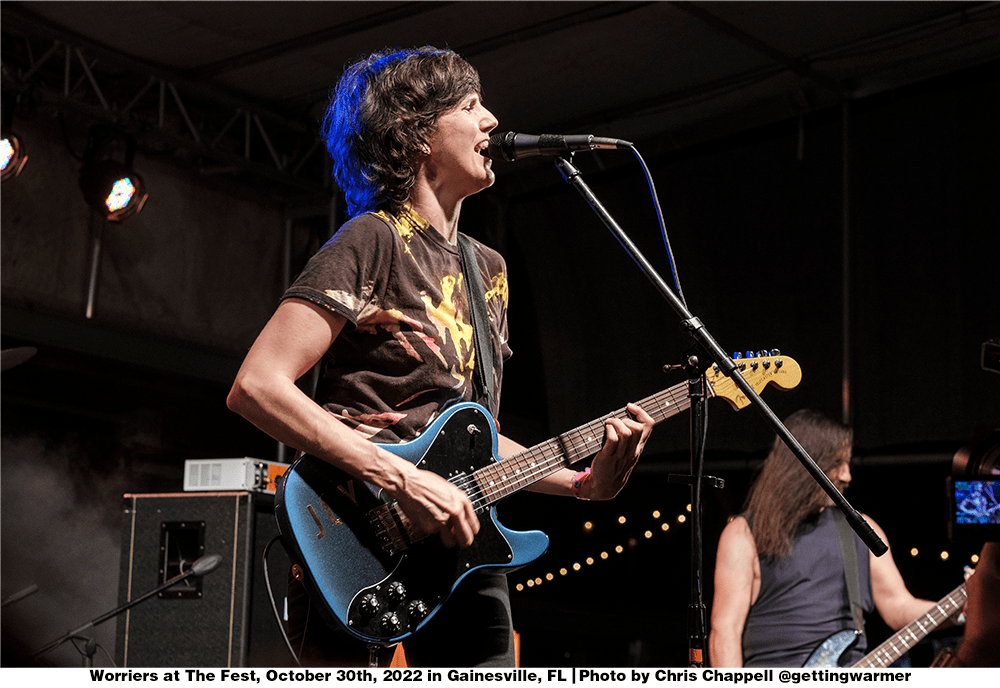 On the last weekend of October in Gainesville, Fla., when all the college kids leave town for a football game, thousands of punks descend on the small college town for three days of punk rock, PBR, and hugs. Fest is more than a music festival. I’m sure if you’re reading Razorcake, many of your friends have heard that before. Anti-Flag, a band that has played all over the world, from European arenas to Midwestern dives in their thirty-four-year tenure, commented that out of all the festivals they’ve performed over the years, Fest is extraordinary. Franz Nicolay, during his Sunday afternoon set, joked that Fest is a gathering of “sentimental bearded men.” At one point in the festival’s history, I think this was absolutely true, but over my own nine years of attending, I can attest to Fest’s growth in inclusivity and community orientation with age. Back in 2010, most of the bands sported the same beard/flannel combo while playing gruff Hot Water Music/Dillinger Four-inspired music. Don’t get me wrong, I love a good melodic punk singalong but I’m glad to see the diversity of bands at Fest increase. It’s more common to see people of color and queer band members than ever before.

Fest is a choose-your-own-adventure as bands are playing simultaneously across multiple venues all day. You could easily only see bands from a particular genre (melodic punk, ska, hardcore, screamo, country/folk) and have a full slate. Below is a window into the bands I saw throughout the weekend.

The day before Fest officially began, Boca Fiesta, a local Mexican-inspired restaurant owned by former Against Me! drummer Warren Oakes, held a Pre-Fest show with a number of bands playing the festival. The one I was set on catching was Tijuana, Mexico’s own DFMK. I’ve seen this band several times between Fest and Awesome Fest, but every time I’m blown away by their hard and fast rock’n’roll punk. The antics of their singer, Mr. Cap, are stuff of legend: kicks, splits, jumps, and spitting into the air to then catch it in his mouth. All of this drives in the fact that DFMK are one of the most rocking bands going.

During his comedy set, Chris Gethard declared “Ska is back!” and you know what? He’s absolutely right. I caught only a fraction of the ska sets throughout the weekend: Catbite, Suicide Machines, Abraskadabra, and Against All Authority among them. I arrived in time for the last couple songs of JER’s (of Skatune Network fame) set, and what I saw made me wish I had gotten there earlier. Backed by the most energetic and animated band I’ve seen—complete with horns, keyboards, and guitars—JER danced and swayed across the stage and through the crowd in an array of songs off their first album of original material, Bothered//Unbothered.

Another ska highlight came in Abraskadabra, a band from Brazil that has been around for nineteen years and it shows. This band is the dream of what ska bands could and should be, featuring an onslaught of lively horns, creating an environment for fast-paced fun with the appropriate chaos.

I caught Atlanta, Ga. alt-rock/punk group New Junk City twice over Fest weekend. The first set featured all originals with many songs off their just-released A-F Records album Beg a Promise. Since leaving Gainesville, this record has remained on repeat for me after hearing the hooks and responses they provoked from the energetic crowd. The second set offered a rousing collection of Weakerthans cover songs—perennial favorites for the more emotional of us at Fest. The band opened with the somber “One Great City” and closed with the crowd-pleasing “Aside,” with all the hits in between. As a die-hard Weakerthans fan, I probably had the most fun singing along up front at this set.

One of the more emotional sets during the weekend was Worriers at the Heartwood Sound Stage on Sunday. Prior to the weekend, frontperson Lauren Denitizio announced this would be their final year playing Fest. After playing a whopping fourteen Fests, Lauren has decided to end this chapter in their life and the band certainly went out on top. The set spanned Worriers’ career, ranging from old songs never to be played again like “Cruel Optimist,” to more recent set staples like “Plans,” “Glutton for Distance,” and the non-binary anthem, “They/Them/Theirs.”

Perhaps the most anticipated set of the weekend was Philadelphia’s legendary hardcore punk act, Paint It Black. They haven’t played Fest in nine years and rarely play in general these days, so any opportunity to see them is a treat. The band was slotted to play forty-five minutes but instead rampaged through thirty minutes of fast, politically-charged songs to an audience screaming every word with singer Dan Yemin firmly planted in the crowd at the barricade. Nearly ten years on from their release, songs like “Salem” and “Womb Envy” remain anthems for the war against the religious right.

Zeta are probably the most unique band you could see at Fest every year. Originally from Venezuela and now residing between Florida and North Carolina, Zeta plays self-described avant-experimental punk. Each set I’ve seen features a different lineup of instruments, this time incorporating guitar, bass, drums, maracas, keyboards, a small horn section, and bongos. The vibe of a Zeta set is unparalleled—groovy, yet loud and powerful. It’s best to witness it for yourself.

I’ve noticed many Fest attendees make a point to see their hometown bands to show support. As an adoptive Seattleite, I felt like it was my duty—and privilege—to see Dead Bars at Fest. They were absolutely in their element, captivating a packed room with hits like “No Tattoos” and “D-Line to the Streamline.”

I caught the All Away Lou set after being recommended their 2022 album, Things Will Change, by my friend Connor. Frontperson Lou Hanman, has played in numerous bands over the years, from fronting anthemic U.K. punk band Caves, to drumming in the Mikey Erg band, and playing bass in Anika Pyle’s Katie Ellen. All Away Lou played through an array of fuzzy punk and ’90s-alt-infuenced tunes, and even capped their set with a rare Caves song for Fest veterans.

The energy in the air right before Avail took the stage for their first Fest set in god knows how many years was unmatched. Before they played, a friend of the festival took the stage to talk about all the hard work Fest organizer, Tony Weinbender, has done over the years to keep the festival and its community going. Tony was awarded a “certificate of excellence” by Chuck Ragan and Tim Barry, representatives from the Gainesville and Richmond punk scenes. Through tears, Tony talked about how it’s only because of the community of folks who attend and volunteer at Fest that makes it such a special and inclusive space.

Once the music kicked in, folks went off for Avail. I can’t imagine anyone not having fun watching singer Tim Barry amble around the stage with his iconic sway, while Avail hype man Beau Beau played the comedian to Tim’s straight man. The band closed with the classic “Scuffle Town,” where Tim urged the crowd to step up the energy for the seventy-eight second duration of the song.

Fest never ceases to amaze, and as I get older, I appreciate the community built around this three-day, sweaty, punk rock festival in a Florida swamp. It’s about connecting with like-minded folks over a shared passion for DIY music and culture. I can’t wait to see everyone next year!