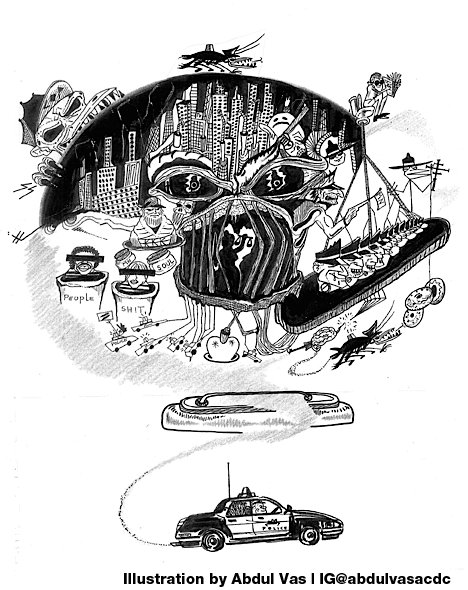 ENOUGH IS ENOUGH: A 150 YEAR PERFORMANCE REVIEW OF THE MINNEAPOLIS POLICE DEPARTMENT, free PDF, 8½” x 11”, glossy, copied, 36 pgs.
Enough Is Enough, before even being opened, is super aesthetically pleasing, well laid-out, and intriguing. Once opened, it’s a little intimidating. These people have done their research and it shows. That’s important, though, because the amount of opposition you face when you attack the police, even from an intellectual standpoint, is stunning. Getting into the actual content, though, Enough Is Enough is the exact right combination of statistic, history, and narrative required to make a compelling argument against something so ingrained in our culture. It’s split into three sections: Where We’ve Been, Where We’re At, and Where We’re Going. This zine is specific to the Minneapolis Police Department, but does briefly go into the history of policing as a whole before detailing the specificities of MPD’s long and fucked-up narrative. Where We’re At exposes the current state of the MPD through the lens of both those who work in direct contact with them and those most disadvantaged by them on the daily. The portrait is grim but it reflects a reality many people with privilege can’t see. Where We’re Going is the most hopeful of the writing—not that we should try to make this situation light—and provides concrete, realistic steps to a community and world without police, and for that, I love it. –Jimmy Cooper (mpd150.com)

BEETROOT, $5, 5¾” x 8”, risograph printed, 40 pgs.
In vibrant pink and forest green, this risograph printed beetroot cooking zine really is beautifully designed and informative! Including recipes on cooking beetroot in a slaw, borscht, curry, or making them as pierogies, the recipes sound hearty and filling (an especially good thing now that the weather is colder). There are instructions on how to preserve and pickle beets, and a nice afterword explaining how cooking has helped the author through bouts of depression. Further reading of healthy cookbooks is included in the back. –Tricia Ramos (Beetroot, etsy.com/uk/shop/tfhtfh)

GOTH GANG: A MEMOIR #1, $3, 4” x 2½”, Laserjet, 20 pgs.
Nostalgia is the driving force behind this mini-zine. Whether you lived goth in the ’80s, or are a current goth kind of missing your other goth friends in your empty, empty room, this brings that great feeling of adolescent camaraderie right to your palms. This first issue’s all about discovering other goths and that scary moment when you go to that Hot Topic (circa ’90s) getting your first black T-shirt. Check it out. It leaves you wanting more and there are at least two more issues I know of. –Iggy Nicklbottum (Anonymous, bought at Book Show)

MY DUMB KIDS, $3, 3¾” x 9½”, Risograph, 14 pgs.
Picked this zine up at a sketchy-looking comic shop where my sketchy-looking witchcraft store used to be. It immediately caught my attention with its bright cover and hilarious title. I bought it, got my ass outta there, and read this hilarious comic zine on some dumb kids. It uses a style of art that mimics a coloring book crayoned in by a talented child. Not a dumb one. It follows the narrative of a man who says his kids are dumb, and his smiling contempt of the children is something that I can really get behind. Kids are dumb. Pick this up! –Iggy Nicklbottum (Sam Spina, spinadoodles.com)

PROOF I EXIST #29, 5½” x 8½”, copied, 20 pgs.
This issue of Proof I Exist zine is about obsession with hockey. He describes his initial struggle with it, not wanting to get down with hyper-masculine jock shit and making his peace with this. He also analyzes hockey from a queer standpoint, reviews a hockey book found in an old couch, and more. The best part by far was about his teenage love of playing the game with his friends. First, they’re content simply playing with inline skates and two trash cans to mark a goal, then someone suggests they compete in a state competition. Taking up the challenge they get in way over their heads playing high school teams that are far more skilled. The fallout is hilarious and kind of sweet. While it certainly didn’t inspire me to reconsider hockey, people writing about stuff they like with joy and passion is always fun to read. –Craven Rock ([email protected])

ROCK ‘N’ ROLL HORROR ZINE, THE #2, 5½” x 8½”, copied, 40pgs.
This collection of horror fiction is the opposite of a band like, say, The Misfits. It’s horror about rock rather than rock about horror. It’s a fun, trashy read that can be on the predictable side. For example, take the story about an ancient guitar chord unleashing a Lovecraftian hell upon the world, or the one about a death metal band calling up a Lovecraftian hell upon the world, or zombie punk bands, all of which are fine for a bus ride. However, at times it gets pretty creative, take “End Times at Rock ‘n’ Roll Joey’s,” a story about a rockabilly diner serving the haggard survivors and mutants of an apocalyptic world. Most of the material is pretty light, horror fare (not Groovy Ghoulies light, but there’s nothing you’ll have to leaves lights on after reading), however, I have to admit Ben Fitts’ “Reality,” with its cyberpunk take on murderous death metal, will get under your skin if you let it. –Craven Rock ([email protected], doomgoat666.wixsite.com/benfitts)

RUM LAD #12, £3, 6” x 8”, printed, 26 pgs.
This is a zine of dedication and remembering of one zinester’s grandparents. In this issue of Rum Lad, we learn about the author’s grandparents, one of who died in 2013, and the other in 2017. Short but sweet, the zine has quick memories of events or personality quirks of these loved ones, including the grandfather’s Navy tattoos, the grandmother’s slow, but fun old moped, and both elder’s deaths. Definitely a perzine that got me feeling emotional about my own family. –Tricia Ramos (Rum Lad, etsy.com/uk/shop/rumladzinesandart)

SLUT CITY JOURNAL #2, $2 ppd. or trade, 5½” x 8½”, copied, 100 pgs.
One hundred pages of DIY from a collective in Salt Lake City, Utah. Utilizing every page, there are tutorials on pirate radio, how to broadcast your own television station, recipes for affordable meals, how to start a distro, how to make milk paste (not wheat paste), guides to utilizing thrift stores to their ultimate potential, how to become a show promoter… honestly the list goes on and on. A super useful guide for any individual interested in removing themselves from consumerism and becoming a more self-reliant human. –Tricia Ramos (Slut City Journal, SCJ c/o 900 South #326, Salt Lake City, UT 84111)

subTERRAIN #80, $7, 10” x 12”, printed. 96 pgs.
Keeping anything happening for thirty years is impressive. subTerrain—a Canadian indie lit mag—manages the feat, doubly impressive due to its dedication to publishing unheard voices. Like the many issues I’ve reviewed in the past, this issue is themed: it harkens back to the mag’s original mission statement of publishing from the margins. Throughout this anniversary issue is fantastic fiction and poetry: this issue’s standouts include abecedarian poetry by Evelyn Lau and lake monster fiction by Anne Baldo. At twenty-five bucks for a two-year, six-issue subscription, subTerrain is a steal. Always a great read, always a joy to find in the mailbox. Get it! –Michael T. Fournier (PO Box 3008 Main Post Office, Vancouver BC V6B 3X5 Canada)

SYNDICATE PRODUCT #24, $3, 5½” x 8½”, copied, 24 pgs.
If you’ve ever read a book that was so awful you couldn’t help but tell your friends all about it, then this zine will be right up your alley. This multi-contributor zine features negative reviews, or “cultural criticism” of books that disappointed or infuriated their readers. Honestly it was a delight. Reading reviews that are so brutally honest about popular publications brought me a lot of joy. The really appealing part is that all of the reviews explain in detail just what was so upsetting or angering in the books. From their topics, to the pacing of the writing, there’s something for everyone to hate on! Highly recommended if you’re an avid reader or enjoy the negative reviews from Goodreads. –Tricia Ramos (Syndicate Product, c/o Michel PO Box 877, Lansdowne, PA 19050, synprod.etsy.com)

WHERE HAVE ALL THE FLOWERS GONE #2, $7, 5” x 7”, Laserjet, 36 pgs.
A really amazing guide to the women of folk music. The very first page is a profile of Vashti Bunyan with an amazing illustration of her. This is an extremely helpful and well made guide for anyone who wants to get into folk and needs a place to start. Bijou Karman’s illustrations are beautiful, and the handwriting and design go so well together. It’s one of those zines you can put on your “coffee table” to show off to your friends, and everyone will want to pick it up immediately. Singers include Odetta, Judee Sill, Nico, Karen Dalton, and so many more! Yes, also Joan Baez. –Iggy Nicklbottum (Bijou Karman, bijoukarman.com)