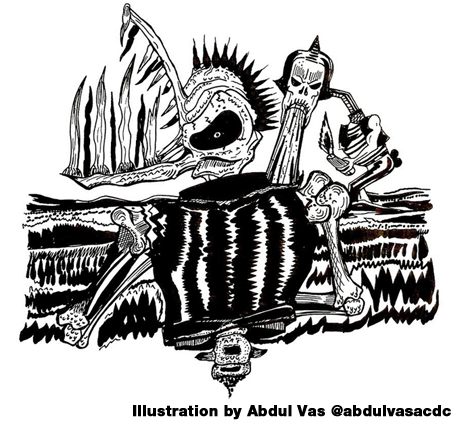 READY FOR WAR: THE FLORIDA EDITION, $8, 8½” x 11”, glossy color, 50 pgs.
Battle jackets are the name for sleeveless vests (often of the denim variety) covered in patches that represent various social and political causes as well as bands. This is photographer Adel Souto’s second foray into capturing these pieces of apparel. These images were taken around Adel’s hometown of Miami as well as at The Fest in Gainesville, Fla. I’m so glad the photos are in color and glossy, as it allows the reader to get the full depth of what the vests look like. There are a wide range of styles and colors as well as bands that are advertised here. While I don’t own a battle jacket, I found these to be fascinating to view, as each of them gives off a bit of the personality of the wearer. It would’ve been interesting to interview the owners of the jackets, too, and find out why they like them and chose to place certain patches on the jackets. Still, an interesting concept and worth checking out if you’re into this sort of thing. –Kurt Morris (adelsouto.com)

ANALOG COMPANION Vol. 4, Issue 3, free, 5½” x 8½”, printed, 30pgs.
Visually, this is one of the nicest zines I’ve seen in a while. The print quality, the paper stock, and the overall layout combine with the content (black and white photos and text), to make something that’s as fun to look at as it is to read. The visual style varies throughout, ranging from the cut-n-paste look of zines of the past, to more skate/snow magazine style looks. It’s appropriate for the content of the zine, with both snowboarding and hardcore punk content on offer. This issue features interviews with Vantage Point and Pummel, as well as photos and reviews of a couple local shows, album reviews, an article on skateboard lifestyle company Heartthrobs, and two articles on snowboarding from two very different spots (Stowe, Vt. and Trondheim, Norway). I thought the interviews were good, but would have liked to see more questions, and perhaps some introductory backgrounds about each band. I loved the quasi-philosophical slant to the article “Resort Resuscitation,” about riding at Stowe, trying to find something new to appreciate even in familiar territory. Definitely a vibe I can relate to as a cyclist. This was my first introduction to Analog Companion, and I’m looking forward to future issues. –Paul J. Comeau (analogcompanion.com)

DEAD IN SAN DIEGO: BETTY BRODERICK, $13, 5½” x 7”, Laserjet, 16 pgs.
There are so many forgotten murder trials that were such impactful moments in the lives of many of us Southern Californians. The ones we do remember involve annoying serial killers like Richard Ramirez, who was that annoying kid who thought he was hard because he listened to Slayer. Unless you were a little older in the ’80s (or alive), you won’t remember Betty Broderick’s murder trial on TV, especially in San Diego. This offshoot of Dead in Hollywood gives a great recount of the moments of Betty Broderick and her train of thought before and after she killed her ex-husband and his wife. A hero to many a pissed wife, and a maniac to most, it’s nonetheless interesting to read about the incident. Jump into this intense zine now… or else! –Iggy Nicklbottum (Castroburger, instagram.com/deadinhollywoodzine)

GAD! #21, $?, 8½” x11”, copied, 22 pgs.
I don’t know much about Alabama. I know it’s in a part of the South even other Southerners look down on, and that’s about it. GAD! attempts to shed a little light on the Alabama underground through show and album reviews, live photos, and other arts by folks involved in the scene. It looks to bring together a variety of people’s voices, and it’s nice to see folks supporting each other and giving each other a platform locally. There’s even a directory of “Alabama Underground Music” in the back, listed with the type of music and city, which is a godsend to anyone just entering a scene—lord knows I could have used something like this moving to the city for the first time. Twenty-one issues is a commitment to a scene that’s rare, and I commend GAD! for keeping it up. –jimmy cooper (PO Box 1308 Gadsden, AL 35902, gadpunkzine.com)

GAD!, #15, #16, #17, 8” x 10½”, copied, 28 pgs.
Sloppy, unprofessional, cool as fuck. This is the kind of thing I dreamed about doing when I was in high school. GAD! is an Alabama scene-focused punk zine that features reviews, interviews, and a loose collection of artistic pieces. We don’t agree on what’s cool music, or how much one should praise the Misfits in thirty pages, but it’s so freaking cool to see a scene highlighted this way. This thing reeks of passion. Keep it up! –Gwen Static (PO Box 1308, Gadsen, AL 35902, gadpunkzine.com)

LOVE AND RAGE AND NETWORK OF ANARCHIST COLLECTIVES: ON FEDERATIONS AND NETWORKS, $3, 5½” x 8½”, 27 pgs.
Iwasa works to catalog mostly ’90s anarchism and this is a nice little slice of that. Knowing our history is important, and the ’90s were a midway point where things were just starting to be cataloged digitally but not quite, and not well—many websites and forums that may have been important are now defunct or unreachable, and zines weren’t necessarily posted online in the way many are now, so a lot fell through the cracks. I’m sure in the next years or decades, more efforts will be made to historicize those movements, but for now, we’ve got zines like this and Google. I appreciate the representation of the “network of anarchist collectives” in the title, including the kind of valuable back-and-forth dialogues between people from a few different infoshops that prevents the historicization of only one perspective so common to any type of history. The scene was and is varied and diverse, and I’m glad to see it start to be preserved. –jimmy cooper (Little Black Cart, c/o A. Iwasa, PO Box 3920 Berkeley, CA 94703, [email protected])

RAZORBLADES & ASPIRIN #6, $10 U.S./$15 world, 8½” x 11”, glossy color, 36 pgs.
This is an incredibly well-designed, intense music fanzine. There are lots of glossy color photos of bands showing a range of emotions in their live performance. The cover with Iron Reagan hits the reader with the vocalist screaming and looking half-crazed. Open the cover and there’s the singer from Night Birds with the microphone cable stuck between his teeth and yanking hard on the mic. One after another the photos strike with intensity and crazed faces. Band members look like they’re about to explode—the music has been captured in photographic form. There are a few dozen photos in this zine and not a bad one in the lot. In addition, there are album reviews and interviews with Lupus and Byllepest. Ten bucks seems a bit steep, especially since it’s predominantly photographs, but this is one of the finer quality zines I’ve ever seen, so it makes it almost worth it. –Kurt Morris (PO Box 23173, Richmond, VA 23223)

STREET DEED #3, $?, 8½” x 11”, 64pgs.
Street Deed is one of those zines that catalogs a scene you didn’t even know existed. #3 is the first bilingual edition of what seems to be Bulgaria’s premiere punk fanzine—the upside of this is that I can read half of it, the downside being that I can’t read the other half. It seems to have some reach. They interview not just Bulgarian bands—and it’s a nice look into the way European bands interact with each other; some banter about each other’s countries—but an ultimate camaraderie between punks. It does feel a bit stuck in the street punk phase of American/U.K. punk, with a focus on not only that genre but that era, as well, but then again, so are some Americans! Great interviews with bands from across Europe, interesting piece on the Dead Boys, and hand-cut-and-pasted with a tremendous amount of dedication for sixty-four pages. –jimmy cooper ([email protected])

TRASH BABIES 2,$8, 7”x 8½”, risograph, 50 pgs.
Got this giant green bad boy in Texas at the Houston Zine Fest. This baby is thick as hell and I purchased it immediately after I flipped through it and saw some gross, weird, furry-type thing. I dig it. This is a trash-themed zine (hell yeah!). That’s another reason I got it, since we are all trash people. There are a multitude of talented people in this issue of Trash Babies, though this is the only issue I’ve owned or seen. Each artist has a different identity in their imagery and work, from cute to fucking disgusting. It’s exactly my kind of thing, for I am also cute and gross. It’s great to see a collection that seamlessly puts together “outsider” artists with “traditional” artists. –Iggy Nicklbottum (Various, arfranklinstein.storenvy.com)

TRUST#196, €3.50, 8⅜” x 11¾”, offset, 68 pgs.
I will freely admit that the brunt of my conversational German revolves around asking you how many potatoes you have, but I am a tuned-in enough cat to be aware that Trust has been published bi-monthly since 1986, making it the longest-tenured regularly published punk zine in Germany, if not, at this point, the world. I mean, you couldn’t even really call it “the Razorcake of Germany,” you’d have to call Razorcake “the Trust of the United States” and who would like that? Nobody. Nobody would like that, and I’d get punched in the nose for saying it. Well, screw that, I’m not taking the bait! Thanks for nothin’! In any event, this issue has columns (naturally), record reviews (of course), book and fanzine reviews, news items, lotsa big photos, interviews with Martin Sorrondeguy (Los Crudos, Limp Wrist, et al.), Chain Cult, and Proud To Be Punk, an article on publishing house Ventil Verlag, and a bunch of ads. Due to my lack of non-potato-based comprehension of the language, I found the ads to be one of the more interesting aspects of the zine. Since Germany is of a reasonably compact size relative to the U.S., the ads tended to skew more towards promoting upcoming tours than pushing physical product: Did you know the Professionals are playing shows again, without Steve Jones? Did you know Marky Ramone is in a band with Greg Hetson? Did you know the Dead Kennedys are opening for the Dropkick Murphys? I didn’t know any of this crap! All of this just goes to show ya that punk is a universal language, which is why the Martians will be our friends and no one else’s. –Rev. Nørb (Postfach 11 07 62, 28087 Bremen, Germany)