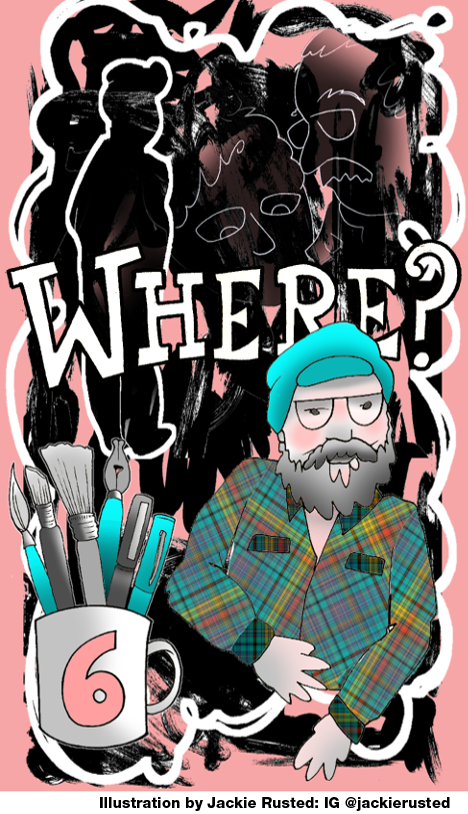 MINOR LEAGUES #6, $?, 9” x 8”, copied, 100 pgs.
I was (and am) a huge fan of the previous issue of this one. Editor Simon Moreton has a distinct visual style which lets readers fill in gaps: his drawings imply depth and motion with their thick ink strokes and thin lines. In this issue, the first part of a larger narrative, Simon wonders whether he’ll be able to do justice to the story of losing his father to cancer. The answer is a resounding yes: Simon’s illustrations are a perfect complement to his prose, which uses breaks in chronology effectively to add even more narrative layers. One of the best zines out there right now. –Michael T. Fournier (smoo.bigcartel.com)

DANNY MARTIN’S TUCSON MURALS, $10, 5½” x 8½”, copied, 28 pgs.
From the pretty straightforward title (which, by the way, is actually A Very Incomplete Collection of Danny Martin’s Tucson Murals), this photo collage zine is page after page of local muralist Danny Martin’s murals around Tucson, Ariz. Printed in black and white, we see a wide range of Danny’s art, with commissions, western heroes, murals advertising music shows for the Rialto Theatre—it looks like Danny is one busy muralist. The screen printed cover to the zine is also a nice bonus. –Tricia Ramos (Danny Martin’s Tucson Murals, [email protected])

DEAR SENTIDA, $5, 5½” x 8½”, LaserJet, 12 pgs.
Dear Sentida was short but sweet. I got to the last page and was pretty pissed that it didn’t continue, but then I thought that maybe that’s a sign that I really liked it and I wanted it to continue. It’s Bay Area artist Breena Nuñez’s personal tale in the lens of an anthropomorphic crocodile, dealing with the annoyance and awkwardness of getting asked out in public. It’s something that I can’t even fathom anymore, as the idea of asking anyone out is ridiculous and anxiety-ridden to me. The art is charming and well-made, and the zine itself is funny as hell. It’s the first I’ve seen of this artist and I want to read more of these comics, so it is very recommended. –Iggy Nicklbottum (Breena Nuñez, [email protected])

EARTH FIRST! JOURNAL, Vol. 38 No. 1, 8” x 10½”, newsprint, 64 pgs.
Again, EF Journal gives us news of environmental liberation struggles throughout the world. Some of the features in this issue get into defending wild buffalo in Yellowstone National Park, then there’s an update on what’s happening with the La ZAD in France, an occupation that turned into autonomous communal land that’s constantly defending itself from The State. There’s also a feature on anti-pipeline struggles taking place in New York. The most interesting article—and one that made me livid—was about lawsuits taken out on anti-DAPL activists and the COINTELPRO-style tactics used against them, from infiltration to trumped up gun charges. I like how EFJ gets more intersectional every issue. It’s all one fight! –Craven Rock (Earth First! Journal, PO Box 964, Lake Worth, FL 33460, [email protected])

GUNK #1, $8, 6¾” x 6½”, LaserJet, 40 pgs.
My face has melted to a great degree. I’ve felt my body turned to slime, and it was disgusting and amazing. I thank Gunk Vol. 1 for making me feel this way. In the spirit of classic Cold War era artists like Will Eisner, C.C. Beck, or even Bob Montana, this comic zine has a nostalgic spirit that is really appealing to the eyes. It hits my every being with that nostalgia stick for a time I never grew up with. It’s strange, gross, and beautiful. The stories included have wicked turns, and put you in the shoes of some of the weirdest individuals. Sit back, relax, and get taken into a world where The Blob wasn’t a film, but a reality. –Iggy Nicklbottum (Curt Merlo, curtmerlo.com)

LIVE FAST DIE, $3, 5½” x 8½”, color, 10 pgs.
What happens when you buy GG Allin’s preserved dick from a hard-up Merle Allin? Well, this comic suggests it just might start talking, insulting you, and quoting GG’s lyrics. Next thing you know, you might be slamming dope with hookers and said micropenis. The illustrator of this comic had to grace GG with an inch or so of length in a couple of panels simply to make it stand up and talk—a dick so small it would, otherwise, stop the flow of the story. That struck me as kind of funny. –Craven Rock ([email protected], veek.rocks)

MAXIMUM ROCK’N’ROLL #423, $4.99, 8 ½” x 11”, newsprint, 104 pgs.
This issue of Maximum Rock’n’roll features the Break Free Fest and is promoted as “By Punks of Color for Punks of Color,” which is something I can fully get behind. The fest is in its second year and is held in Philadelphia, Pa., and showcased a myriad of bands from all walks of marginalized lives and identities. In a nutshell, it was a celebration of punk bands of color united by music to let loose, have fun, talk shit on our oppressors, and ultimately raise some funds to donate to worthy causes such as the Trans Lifeline, United We Dream, and The People’s Paper Co-op. Judging from the cover’s photograph, the shows looked like a lot of fun and boasted a largely black audience: fuck yeah! I haven’t flipped through an issue of MRR in quite some time, but a lot of my old favorites (Al Quint, Felix Von Havoc) are still representing. And while a lot of the other columnists are new to me, their writings are full of perspective from varying degrees, such as sex work (Erin Gerety) and radical teachers in the education field (John No). You say you want fucking punk bands? Featured are Olympia noise fuckers Physique, Portland political punks Abolitionist, and Parisians PMS in a farewell interview of sorts. All this plus the usual record, zine, movie, book, and demo reviews. Even though I’m not as much as a regular reader as I was in my early twenties, I find comfort in knowing that the world’s longest running punk fanzine still has something for everyone and doesn’t seem to be in danger of disappearing anytime soon. –Juan Espinosa (Maximum Rock’n’roll, PO Box 460760, SF, CA 94146)

REAL BOSS HOSS #3, $5, 8½” x 11”, 28 pgs.
Keeping well within the parameters of “Chicano Time,” Jorge unleashes the third issue of this zine some sixteen years after the second. Not much has changed stylistically—emphasis is largely on the garage end of the punk spectrum, with Courier fonts in abundance and snatches of intelligence-tinged obnoxiousness within its Xeroxed pages. This time ’round we get interviews with Trent from the Mummies (which is worth the price of admission alone) and comedian April Richardson, plus a “diary” of the 2017 installment of the Ponderosa Stomp, a tribute to George A. Romero, a “Guide to African Rock ‘n’ Roll,” comics, and assorted reviews. It remains one of my fave local zines, and here’s hoping Jorge can get the next installment out before we’re both in an old folks home. –Jimmy Alvarado (Real Boss Hoss, PO Box 50236, LA, CA 90050)

SOMETHING FOR NOTHING #76, two stamps, 5½” x 8½”, copied, 48 pgs.
This is the thirtieth anniversary issue of Something for Nothing, and in it we get columns from long-running contributors updating us on what they’ve been up to since last writing. Each copy of this anniversary issue also features one-of-a-kind hand-colored covers (with crayons). Reviews included feature new Dead Milkmen releases, Citizen Fish, Violent Femmes, and my personal favorite, the beverage review column. I don’t know why non-alcoholic beverage reviews are so appealing to me, but I always look forward to them with Something for Nothing issues. –Tricia Ramos (Something For Nothing, PO Box 226, Massillon, OH 44648)

TEAR THE PETALS OFF OF YOU, $?, 4½” x 5½”, copied, 54 pgs.
A zine about abuse and the emotional wear and tear it continues to do on one survivor. When a popular band has a member outed as an abuser, a zinester’s world is turned upside down as their own personal love and devotion to the band changes in an instant and connects their own trauma directly to their own ex. A cathartic and openly honest zine, the emotion is so visceral one can’t help but feel it all deeply. A reminder that trauma not only lives in our memories—it can be brought back from the most unexpected places. –Tricia Ramos (Tear The Petals Off Of You, crapandemic.storenvy.com)

YAAWN COMIC #2, $5, 5½” x 8½”, copied, 12 pgs.
YAAWN is a band. YAAWN is also a comic zine about the band. All I know is this comic is two stories on the adventures of the band. Damn, man. I need all bands to make zine-comics about their adventures on the road, because it has the power to connect them with their audience. Shit, I’m listening to their fucking Bandcamp as I write this, so it’s already a good marketing tool. The first story is super short and gets its point across, but the second story is the best. The punch line at the end about “not being ska enough” is my favorite part of the whole thing. It’s funny, and the drawings are like a sloppy Adventure Time, if it had a bunch of tired punks. Check it out. –Iggy Nicklbottum (YAAWN, artsncrassdistro.com)

ZISK #29, $3, 7” x 11”, copied, 36 pgs.
Given that it covers a game which manifests change at a pace somewhere between somnambulant and glacial, the self-proclaimed “Baseball Magazine for People Who Hate Baseball Magazines” enters its twentieth season looking little different than it did in 1999. Size, shape, page count, office copier aesthetic—it’s all practically the same as it was nineteen years ago. What is far less predictable about Zisk is the content in any given issue: Other than having a starting point of “having something to do with baseball,” there is virtually no telling what any given issue might contain. If you’re imagining a run of who-can-yell-the-loudest diatribes about whether the Dodgers should have started Clayton Kershaw in Game 1 of the NLDS, you’re imagining incorrectly. Topics covered in the current issue, for example, include the music in baseball stadiums, Houston’s post-flood World Series celebration, my investigative report into why the 1965 Fritz Ackley baseball card is worth two hundred bucks if the guy only won one game in his career, Todd Taylor’s typically meticulous history of the Houston Astrodome and the turf therein—which then spins off into a separate four-page rant about the history of grass (I’m not kidding)—poetry, and more. I might be biased, but it’s fascinating to observe what a dozen different contributors come up with when they’re asked, broadly, to “write something about baseball.” As a result, Zisk can be read and enjoyed by just about anyone who doesn’t manifest a legitimate hatred of the sport, and, like baseball itself, you can jump in anytime without feeling that missing the last twenty years has left you insurmountably disadvantaged. –Rev. Nørb (PO Box 469, Patterson NY 12563, [email protected])