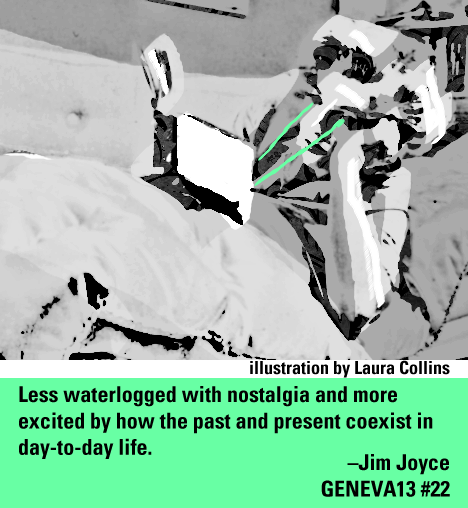 What we have here is a zine devoted to Geneva, N.Y., a small town in the Finger Lakes region of the state, just thirty miles south of Lake Eerie. Geneva isn’t a bad place to be, it’s just not as sexy as the major cities to its left and right. And for that reason, history cares less about it. Kevin Dunn and Annie Greenwood document what’s worth knowing about Geneva; the end resulting in an appreciation of the smaller histories that make up a community. Issue 22 has a bit of eighteenth century history, interviews with the owners of a long- running independent sandwich shop, as well as with a community activist who’s trying to raise the town’s quality of life and reputation. Or, put it another way—ever see those Images of America books in museum gift shops? They always have a sepia-toned photo on the cover and detail either small-town or neighborhood life in pre-1950s USA. Geneva13 is like those titles, but maybe less waterlogged with nostalgia and more excited by how the past and present coexist in day-to-day life. Anyway, I dig. –Jim Joyce (Geneva13 Press, PO Box 13, Geneva, NY 14456, [email protected])

Steeped in existential questions and deep thoughts about topics from outer space to extraterrestrial life, The Great Encounter is a short chapter book of prose from

Jean-Paul L. Garnier. Only sixteen pages long, this small zine didn’t look like much from the outside, but the writing inside piqued my interest: outer space, explorers from another planet, or dimension. Jean-Paul’s prose goes from sci-fi scenarios, to introspective questions about our own society and the alien-ness of it that each of us sometimes know too well. A great read for anyone who sometimes looks up at the stars in the sky and wonders what’s out there; what secrets our own universe could be hiding. –Tricia Ramos (The Great Encounter, jplgarnier.blogspot.com, spacecowboybooks.com)

MRR still keeps it real after nearly four hundred issues, featuring interviews with TØRSÖ, Mollot, and The Domestics, as well as the usual scene report and punk abroad. I’m particularly struck by the discussion of 924 Gilman, a (once?) venerable Berkeley DIY venue. Several folks chime in about the venue’s decline in standards. And in fact, MRR, a zine historically affiliated with the venue, supports a recent boycott stating, “Without strong and sincere corrective measures from the people already participating in the running of the club, we […] will not be able to offer it our support.” Strong words. I have no horse in this race—as I’m not a Bay Area local and I don’t have a clear understanding of the issue—but I do hope that DIY venues are actively listening to their community and not being self-serving pricks. It’s awesome to know that after nearly forty years, MRR still takes the time to hold accountable other DIY institutions. For an avid reader, this is another solid issue. And for a lucky first time reader, #398 is proof that MRR has still got teeth after all this time. –Sean Arenas (Maximum Rock’n’Roll, PO Box 460760, SF, CA, 94146, maximumrocknroll.com)

Part travelogue, part birding manual, this zine had me thinking, “Should I get into bird watching?” Set in two trips, this issue of Mishap covers a couple’s love of bird watching across the North and Southwest. The first part focuses on Eugene, Ore. and several parks, preserves, and other bird-friendly areas. The second part of the zine recounts an anniversary trip for the couple to several parks across Utah and New Mexico. The author and his partner’s love and hobby of bird watching is infectious, to say the least. I found myself visualizing all the birds and beautiful landscapes they saw and visited. There are so many different types of birds the couple identifies across their two trips, and the middle of the zine features five gorgeously vivid photos of all the locations they went to during their anniversary trip. My only complaint is that I wanted photos of all the birds they saw, but I guess that just means I’ll need to pick up a book on birds and get out there to start identifying them myself! –Tricia Ramos (Mishap, PO Box 5841, Eugene, OR 97405, [email protected])

This graphic memoir chronicles author Chris Kill’s first few months after being diagnosed with multiple sclerosis. The title of the zine sets the tone, joking, “Multiple sclerosis? Why couldn’t I get just, like, one sclerosis?” Twenty-one years young, the author notices tingling in his hands one day, and after reluctantly going to the hospital, he is diagnosed with MS. What follows are daily injections, numbness, vertigo, nausea, weakness, and a general blow to his self worth. In the foreword, the author explains that through the comic strip style format he was able to go through a sort of catharsis, expressing his frustrations and trials in learning to deal with his illness. One Sclerosis is an honest and realistic account of learning to live with an invisible illness, and how to be strong and take control of your life. –Tricia Ramos (One Sclerosis: An M.S. Story, 11051 Grassy Glen Dr., Houston, TX 77064, etsy.com/shop/chriskillco)

Based out of New Orleans, La., Paranoize is a music and “scene report” publication. Originally covering only the music scene in New Orleans, recent issues have branched out to Mississippi and Tennessee bands, and opened to interviewing and reviewing bands from anywhere. This issue features interviews with bands Six Pack, Terminal Nation, Torture Garden, Baghead, and Desecrator. The “New Orleans Scene Report” page is an extensive list of bands in the area and their recent releases, local fests, and upcoming and future music releases. One cool highlight about this zine is that if you’ve missed previous issues, you can order a wide back catalog on their website, or download PDFs for free! –Tricia Ramos (Paranoize, PO Box 2334, Marrero, LA 70073, paranoizenola.com)

Rickie & Aimee Monthly is a sort of a “what’s happening”’ newsletter for young Memphis weirdos. Issue 10 showcases an interview with local photographer Jade Thirawas and marriage advice from rockabilly couple Anne Schorr and Richard James. One tidbit: don’t complain about your partners in public! There’s also a relationship advice column, a style icon feature—icon Ariel hates denim, which is gutsy—and an “availables” section with eight Memphis cuties, like Baby Blood (m), who wants to smoke weed in a dumpster with you; and Peapits (f), who wants some of that sourdough starter you’ve been talking about. All right, at the least, you’d want to email Rickie and Aimee for a list of fun things to do after getting thrown out of Graceland for pretending to be Edvis, Elvis’s long lost older bro. What else is there to say? My tongue gets tied when I try to speak. Rickie & Aimee Monthly, you’re all shook up. –Jim Joyce (Rickie and Aimee, 910 Barksdale, Memphis, TN 38107)

It’s a well-known fact that music and arts classes are the first to be cut in a lot of public schools. The importance of kids having these classes as outlets to express themselves and get in touch with their artistic side is extremely important, and yet often neglected. The “Save Music in Chinatown” project is an event that features several seasoned musicians and well-known bands, then uses its profits to maintain and fund the music program at Castelar Elementary School, found in Chinatown, Los Angeles, CA. Chronicling more than eight shows over the course of two years, this zine features copies of each fundraiser’s flyer and photos of all the bands, contributors, and organizers. It is not only a reminder of how important music and arts programs are in our schools, but an example of how a community can come together to support and work with each other for a good cause. –Tricia Ramos (Save Music in Chinatown: The First Two Years, savemusicinchinatown.com)

I can’t say I’ve ever heard of the record label To Live A Lie, but I am familiar with some bands they have released: Magrudergrind, I Object!, ACxDC, et cetera. They’re primarily a grind/powerviolence label, based out of North Carolina. To Live A Lie marked their tenth anniversary in 2015 and this zine is an account of those ten years, as told by their founder, Will Butler. It’s nicely laid out and includes a solid narrative of the first few years. He gets in the weeds with this, detailing many of the split releases he did and his feelings on them. If you’re a big fan of the label, you’ll definitely appreciate this. A big chunk of the zine is interviews reprinted from other zines with various bands from the label: Hummingbird Of Death, Backslider, Deathrats, Beartrap, and more. TLALX also includes photos, a discography, and stories told by various people who have worked with To Live A Lie. Will ends the zine with some comments about how the label has had a positive impact on his life. All in all, this is a fairly complete look at the label and proof that, once again, DIY punk takes all forms and can really empower individuals to live a more fulfilling life. Even though I wasn’t familiar with the label, kudos to them for making it ten years and not burning out! -Kurt Morris (TLAL, 2825 Van Dyke Ave., Raleigh, NC 27607)