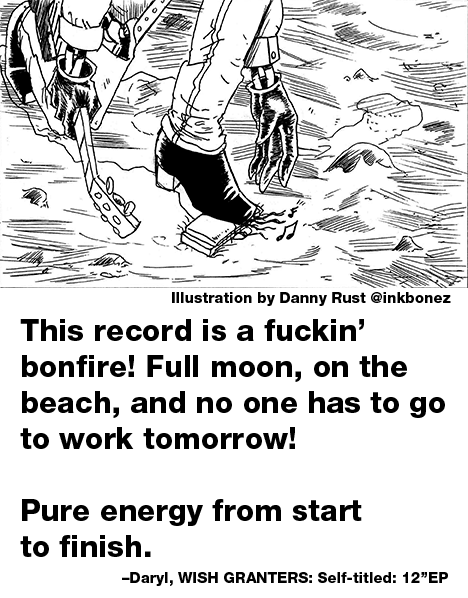 WISH GRANTERS: Self-titled: 12”EP
This record is a fuckin’ bonfire! Full moon, on the beach, and no one has to go to work tomorrow! Pure energy from start to finish as you get to hear the four active ingredients that make up Wish Granters just lay into it like they’re playing to keep the boat afloat. There’s a frenzied swagger and use of sax and harmonica plants them in my head among the ranks of The Blasters, Los Lobos, or The Gun Club. Pretty fuckin’ classic—yet fringey—L.A. sound. If you’re still on the fence on whether or not you need to pick up this record, just look up who the players are; that should seal the deal. Hopefully there’s much more Wish Granters in the mix. –Daryl (Recess / Water Under The Bridge)

ADRENALIN O.D.: Humongousfungusamongus Millennium Edition: LP
I’ve always liked this album. By 1986, most of the leading lights of the early ’80s hardcore scene had moved on to sonically lusher pastures, but AOD stayed behind to steer the ship and figure out where we could go with a musical format that was constantly signaling increasing proximity to a dead end. In some quarters, this is interpreted as the birth of punk/metal “crossover,” but I see it more as them trying to figure out something new-ish and cool-ish and innovative-ish to do in a genre that didn’t come equipped with a ton of standard options for post-market alterations. And when you lead your musical career off with “Paul’s Not Home,” where exactly are you supposed to go from there anyway?? Be that as it may, the songs that have always stuck with me from this record—the ones I played on my college radio show on a weekly basis—were the songs from the other side of the AOD emotional spectrum, the straight-up poppy stuff: The Spaghetti-O’s jingle, their brilliant rip-through of the Masterpiece Theatre theme, their somewhat less woke pummeling of “Hava Nagila,” and the album’s closer and spiritual centerpiece, “The Nice Song,” which both heralded and presaged the pop punk explosion soon to come. Judge this album as you will, but I see it as the last hardcore record worth owning. So there. BEST SONG “Masterpiece.” BEST SONG NOT ORIGINALLY WRITTEN BY A FRENCH COMPOSER IN 1729 AND BEST SONG TITLE: “The Nice Song (In the Key of D).” FANTASTIC AMAZING TRIVIA FACT: The deal on the cover photo is that everyone was supposed to show up to the photo shoot wearing the dumbest-looking thing they could find. Nice Germs shirt, Bruce. –Rev. Nørb (Beer City, beercity.com)

CONTROL FREAKS, THE: She’s the Bomb: LP
Catchy snottiness doesn’t seem to be the phenomenon it once was, but it’s still one of my favorite things. The Control Freaks’ recent LP will blare nicely out the car window while steadying your bat for a swing at a mailbox. The band features overdriven guitars and catchy choruses. “She’s the Bomb” has a catchy repeat. “I Hate Your Face” has the sing-a-long negativity you want. This is an album to add to the canon of Loli And The Chones and Bobbyteens. Beer and bubblegum. Awesome. –Billups Allen (Slovenly)

FUERZA BRUTA: Somos el Mal: 7”
Fuerza Bruta plays some fantastic mid-tempo punk that is equal parts hardcore and oi, which makes for a vicious and awesome sound. Melodic guitar leads that most “street punk” bands wish they could pull off are added to flesh out the songs and are a great addition. Looks like the band has several releases out in the last few years, so it is now time to start tracking those down. Rock solid songwriting, playing, singing, and a great mid-fi recording quality all combine to make this record a must-buy for any punk fan. –Mike Frame (Warthog Speak, warthogspeak.com)

NECKING: Cut Your Teeth: CD
The first time I encountered Necking, I had just paid some sweaty dude in the aisle of a liquor store two dollars for directions to the Smiling Buddha Café. “Go left. Look for a silver structure. People will be pissing in an alley…”. Unloading their drums from the back of a minivan on a dirty side street of Vancouver, Necking were like a tour mirage and miracle. While I watched them perform in the half pipe that night, I thought they were the coolest fucking band I’d ever seen in my life. Cut Your Teeth embodies all the excitement Necking brings to their live show. It’s fun and full of rage and poetry, set to freaky dance punk with heavy rock breakdowns laced with millennium riot grrrl meets feminist metal attitude. Imagine the Descendents rhythm section collaborating with Party Line, but produced by Donita Sparks. It’s relatable, smart, and sneering, familiar yet pushing toward new territory. Think of the musical version of your ultimate youth friend crush wearing a velvet beret and a Suburban Lawns T-shirt, making esoteric comments while painting the last layers of shellac over some freaky statement piece in a garage because she couldn’t afford art school and didn’t want to go anyways. It’s nascent. It’s meaningful. It reminds me of things I cut my teeth to; fast pop punk and the lifesaving potential of confrontational feminist rock aesthetics in the face of art bro appropriation and shitty bosses. Definitely one of my favorite records of 2019. –Candace Hansen (Mint)

NO MEN: Hell Was Full So We Came Back: CD/LP/CS
No Men has a unique musical lineup that consists of a bassist, a drummer, and a vocalist who also sometimes plays drums. The sound is pure punk, though, with a dark energy. Singer Pursley’s voice reminds me of Kylee Kimbrough from the now-defunct Dasher: somewhat husky but forceful, yet minus Kimbrough’s screaming. Her powerful singing is often haunting and matches the music well. Nothing here blew me away but their approach and energy is great. I’m sure they’d be amazing live, too. –Kurt Morris (Let’s Pretend / State Champion)

NOTCHES: New Kinda Love: LP
New Hampshire’s Notches have been purveyors of hooky, poppy punk songs since their inception, and they’ve only gotten better over time. Here, their songwriting chops are in full effect as guitarist Ezra and bassist Zac switch off vocal duties in one gem after another, never relying on clichéd structures even as they recontextualize familiar tropes for new results. I always thought their debut High Speed Crimes would be the one I held in the highest esteem, what with the way drone connected all the songs to create mood. Here, though, the immediacy of Will Killingsworth’s production allows each band member the space to be heard and emphasizes the way all three members interact musically. If you like hooks, you won’t be disappointed. A triumph. –Michael T. Fournier (Salinas / Dead Broke)

PLEATHER: “Wasting Time” b/w “Riot”: 7”
This is what I am talking about. This quick 7” included a little note about the band and, most notably, the fact they hail from Hattiesburg, Miss. which is described as “the best current punk scene in the U.S.” And with these songs, I’m convinced. It reminds me of some staples of our PNW scene in the past couple years, like Childbirth and Pony Time—fun, raucous, sassed-up but nonchalant vocals woven into the meeting place between riot grrrl and shoegaze. A more punk version of Snail Mail’s Habit EP; sad and wistful but with a wink of fuck you. –Theresa W. (Feral Kid)

SLUMGANG: Fermented: LP
Slumgang were a band of dudes, or blokes if you will, from Nottingham, England (yep, the same Nottingham that birthed one of my favorites, Napalm Death). They existed for a mere five years in the early ’90s as a means to play something different from the whirlwind thrash/hardcore of their previous bands Concrete Sox and Default. So where does a thrasher turn to for solace when they suddenly don’t have the need for blazing fast speed? Why Punk House and My Brain Hurts era Screeching Weasel of course! Sounds like it wouldn’t or shouldn’t work, but it actually fucking does! Not only are the songs as catchy and sloppy but they have the potential to fool someone into thinking they’re hearing unreleased SW demos. Apparently only three of these cuts were ever properly released as a 7” with the rest only having been available as a long lost cassette. Pairs perfectly with a twelve pack, a pizza, and you and your friends doing punk shit. –Juan Espinosa (YOFC, yofcrecords.com)