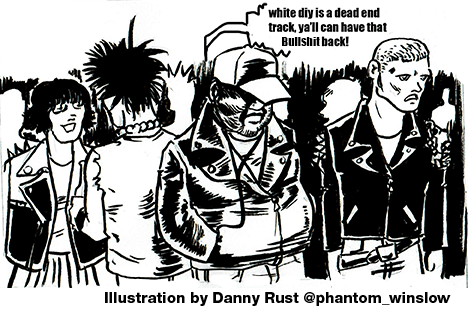 SOUL GLO: The Nigga in Me Is Me: LP
Cathartic hardcore from Philadelphia. Maniacal vocals backed by the resulting sounds of a head-on collision between (early) Daughters and Wrangler Brutes; a little noise and industrial influence never hurt no one either. The lyrics alone are one masterpiece after another with several punches to the gut, such as that of disillusionment with so-called allies in the scene (“Trickle down indie rock loves rap, white DIY is a dead end path and yall can have that bullshit back”), the realities of living in a police state, and the lack of a willingness to put up with any more shit that comes with being a band with POC in a predominantly white scene. As a person of color, the words hit pretty fucking hard and made me realize just how much more work is needed in even the safest of spaces for marginalized artists. Then again, the music and lyrics on this record are anything but safe and that’s what I fucking love about it. This will prove to be a very important recording in modern hardcore punk history, perhaps even replacing the tainted legacy of Bad Brains. But only if you shut the fuck up and listen. –Juan Espinosa (SRA, soulglophl.bandcamp.com, srarecords.com)

CLOWNS: Nature/Nurture: CD
In retrospect, a lot of the glossy skatepunk that Fat was churning out in the ’90s was basically slicked-up heavy metal with snotty vocals. Australia’s Clowns (good for them for locking that name down) take the Fat sound to its logical conclusion, finding exciting ways to add metallic bombast to their music. Well-placed guitar shredding that takes a song to the next level, ominous quiet parts, and creepy sung vocals all pop up in ways that mesh well with the catchy punk base. This is Clowns’ fourth album, their first for Fat, and they take the listener to a lot of places over the course of what turns out to be a remarkably cohesive album. I should add that the production is positively huge, and this record makes me want to throw a couch off my roof. –Chris Terry (fatwreck.com)

FLESHIES, THE: Introducing The Fleshies: LP
What better way to celebrate twenty years as a band than a name change and a new full-length. Good-bye Fleshies, thank you for the memories of bedlam and disorder, hello The Fleshies! Now, don’t think we’ve lost the band we all know and love with the addition of a single determiner word. The Fleshies still wield a sound of undiluted, cutting damnation. Introducing The Fleshies is a point by point checklist regarding the current shitstate we find ourselves in, and a call to arms for those to recognize their privilege and fuckin’ do something with it. The music is chaotic and catchy, shifting speeds and vocal stylings; you get a band with multiple bests. From the speedy, driving numbers, to droney, blown-out tracks, to the requisite weirdo pop anthem. It’s The Fleshies; they’re all over the place, climbing up your body and screaming in your ear. Let this record pump you up to give your conservative cousin a call and ask them why they’re acting like a fuckin’ asshole! Here’s to twenty more years of The Fleshies! –Daryl (Dirt Cult)

NO MEN: Dear God, Bring the Doom: LP
Wow. This album fucking smokes. Femme fronted, dual drumming powerhouse. The driving, hypnotic rhythm drives the whole album with Siouxie-esque vocals going from full bore screams to sultry whispers. It has elements of Jeff The Brotherhood with an almost buzzing stoner rock mixed with punk vibe, where less makes more. Impossible to categorize, this album is a journey, as if they wrote all the songs to fit into one linear path rather than ten songs thrown together. The opening riffs of “Mean Girl” explode into a ten-song rampage. Blood on your hands. It’s mine. No Men. Chicago is burning. –Tim Brooks (Let’s Pretend, letspretendrecords.com)

RADWASTE: End Times Mixtape: LP
Radwaste were a mid/late-’80s Los Angeles post-punk supergroup of sorts. Formed primarily around the remnants of legendary groups 100 Flowers and 17 Pygmies, and later including members of X and The Weirdos, they took their cues from high school marching bands, employing four (!) drummers to provide the band’s complex heartbeat. Though they only managed to release a single 12” EP, 1986’s Cooking and Nothingness, during their initial run, they did record this, their debut full-length, in 1987-88, it was ultimately shelved until, thankfully, Happy Squid recently decided to dust it off, remix it, and make it available. It’s an absolute stunner—both of its seed bands are well in evidence in the sound, coupled with a heavy funk undertow that hints at some Gang Of Four influence, and that intricate, layered drumming giving the whole thing an infectious propulsion from opener “Athena” to its closing cover of Brick’s “Dazz” (the original itself a personal fave of mine). Dense, taut, mesmerizing, and seriously danceable, this is all but destined for inclusion among the many phenomenal releases to come out of L.A. County’s underground. And, to put a nice cherry on top, they’re back together and making the rounds. Fuggin’ sweet. –Jimmy Alvarado (Happy Squid, happysquid.com)

REIGNING SOUND: Abdication…for Your Love: LP
You might remember a weird minute when Toyota got a Mohawk. Toyota tried really hard to “relate” to the young ones in a way that would insert their ugly, boxy car into young America’s lifestyle. This excellent nine-song Reigning Sound offering was swept up in the “make Scion hip” wave and released under the “Scion” record label, eventually to the detriment of the fans because the album went out of print quickly, becoming both hard to find and expensive. Merge has stepped in and made the album available to us non-Scion drivers. Reigning Sound is a consistently great band. This material doesn’t represent a change in style or lifestyle like many “lost albums.” This is just nine more from a group waving the flag for a long time without trapping themselves in a retro-pattern. The album begins with “Lyin’ Girl.” It’s a jumper with a danceable, double snare slap beat and a whirling keyboard riff. “Everything I Do Is Wrong” follows: a slinky, late night offering you could imagine coming from The Zombies. “Can’t Hold On” kicks off with a driving keyboard riff and some solid soloing, leading into a cleverly assembled long chorus exemplifying the band’s quality songwriting. If you buy this album because you like the band’s output, you won’t be disappointed. If you feel you bought a Scion because of The Reigning Sound album, I’d love to hear more about it. –Billups Allen (Merge, mergerecords.com)

URANIUM CLUB: Cosmo Cleaners: LP
I dunno whatever happened to bands and records like these—tight, precise, punk-spirited weirdos located too far in left field to be comfortably lumped in with the punkers, and too locked in and energetic to be written off as merely self-absorbed purveyors of art/noise/goofiness. Maybe they all went into deep cover at the end of the ’90s after Man... Or Astroman? released EEVIAC Operational Index and Reference Guide, Including Other Modern Computational Devices? I’ll admit, that was a tough act to follow. They all probably needed a little Executive Time. Be that as it may, this band sounds like either a funny Shellac, a kitschy Brainiac, or if NoMeansNo joined the Church of the Subgenius and played arena rock versions of Minutemen songs (with the exception of “Michael’s Soliloquy,” which sounds like what one would imagine the guy from “Michael’s Monetary System” by Eater would be up to these days). Screw lithium, uranium futures are where it’s at! Keep that under your energy dome. BEST SONG: “Grease Monkey.” BEST SONG TITLE: “Definitely Infrared Radiation Sickness.” FANTASTIC AMAZING TRIVIA FACT: I’m the only person I know who cares about what the redacted guest solo information really says. –Rev. Nørb (Fashionable Idiots)

VACATION: Mouth Sounds #2699: LP
Gritty Cincinnati punk, just dirty as hell. If Future Virgins tried to cover the first Black Flag EP but had to make all the songs at least two minutes long, it might sound something like this. Confident and catchy, big hooks and choruses, right on the cusp of a “garage rock” tag but a little too laden with unbridled propulsion, this thing just rips from the start. Wasn’t expecting much from the cover art, but that’s what I get for judging a book, et cetera. Or record, in this case. Whatever. Point being, it’s good, check it out. –Keith Rosson (Let’s Pretend)

VARIOUS ARTISTS: Lest We Forget: 35 Great Old Berkeley Bands/Turn It Around: The Story of East Bay Punk: 2 x CS
In 1991, Aaron Cometbus made a tape comp of songs from local punk demos that he’d collected in Berkeley between 1981 and 1988. “The idea was to take some of the spotlight focused on Gilman Street and redirect it on the groups from just a few years earlier who were being foolishly, almost criminally overlooked,” Cometbus says in the new liner notes to the rerelease of this comp. The delightfully fuzzed-out and screechy songs that fill Lest We Forget come from bands that you’ve probably only heard of if you’ve been reading Cometbus for decades (Intensified Bluebeard, anyone?), and handily prove that Berkeley was a hotbed of quality melodic punk long before Green Day and Lookout! Records blew up. Speaking of Green Day, they executive produced the documentary Turn It Around, about Berkeley’s Gilman Street scene where they got their start in the late ’80s. The Turn It Around comp features rare tracks from that iconic scene’s best-known names: Operation Ivy, Jawbreaker, Mr. T Experience, Spitboy, Neurosis, Filth, Blatz, and more. If the Turn It Around tape is the kid at school with a Green Day shirt, Lest We Forget is the kid who walks up to them in the cafeteria who says, “If you like Green Day, you’ll love my friend’s band. Wanna come see them this weekend?” These two tapes make for an impressive (and daunting) collection of music, and a thorough document of a beloved music scene that plays the hits and shares a few surprises, too. –Chris Terry (1234gorecords.com)

YALLA STOCKINGS: Young Cut: CS
And just like that, I’m obsessed. Gorgeous layers of beats and synths and voice. Alternating between sparse and lush. Lyrics like drops of blood, swirling with life. This line has me tangled up: “Taking my time wasting time, looking at pictures that look nothing like me, hoping to find something of myself, but the things I’m not is all I can see.” Maybe it’s because I’m getting a rhinoplasty in a couple days and I’m putting all sorts of things into those words, but they have a grip on me, but I’m going to dance with them. And this tape is so danceable. Not bombastic dance club danceable, but like quiet alone in my living room, just moving and crying danceable, and I love it so much. –Emma Alice Johnson (Let’s Pretend)

These reviews and many, many more are printed in a handy-dandy zine that you can subscribe to at a reasonable price, delivered to your door. Click the link below.