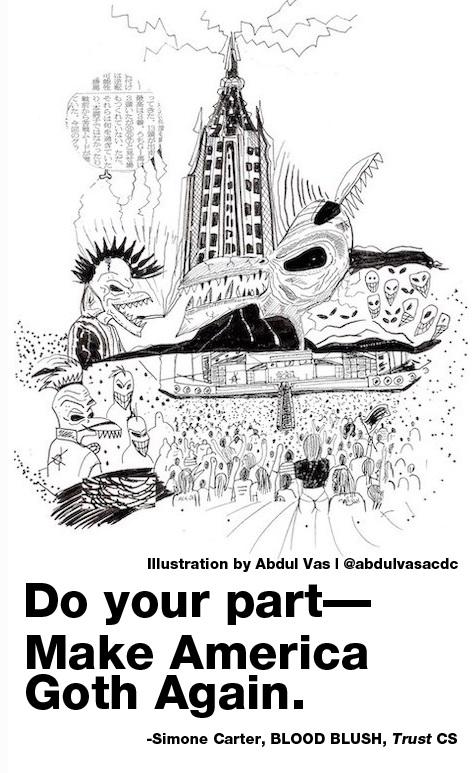 BLOOD BLUSH: Trust: CS
I’m super into this bite-sized, four-song cassette by New York darkwave trio Blood Blush. Trust perfectly straddles the line between drama and chill, with disarmingly beautiful melodies delicately traipsing on top of a relentlessly thudding rhythm section. Sounding kind of like a mesh of Interpol and Bauhaus, this post-punk outfit makes me wanna paint the world black. It’s past Christmas, but you should still buy a copy to stuff in an unsuspecting friend’s sock. Do your part—Make America Goth Again. -Simone Carter (Flesh & Bone, [email protected], fleshandbonerecords.com)

AR-KAICS: In This Time: LP
You can often tell when a band formed longing for the structure and image of genre. There will always be the surf band thinking the sound is in the amps, the grind band thinking the sound in the speed, the ska band compiled of skinheads whose parents wouldn’t let them dye their hair. Richmond, Va.’s The Ar-Kaics recreate a glorious, mid-sixties cave-stomp howl without losing themselves in excessive amp hunting and lazy song writing. The band honed their overdriven jangle releasing several singles since 2014. In This Time is a thoughtful album with solid hooks and more of the ratchety guitar grinding exemplified in their early singles. The album kicks off with “Don’t Go with Him,” a song with looming minor chord play and a catchy chorus. The album moves seamlessly into “Some People” featuring a hop beat and a vocal harmony that would be at home on a classic Kinks record. The album continues in this manner: inspired by the best ’60s sensibilities while maintaining a fresh outlook with relatable choruses and bouts of overdriven mayhem. The artwork was produced by Washington D.C.’s enigmatic Mingering Mike, whose invented album covers for made-up music projects in the ’60s became the subject of a book and distinctive art career. The artwork helps the album into an orbit destined to be a classic for fans of the new old. –Billups Allen (Wick, shopdaptonerecords.com/collections/wick-records)

BUZZCOCKS: Love Bites: CD
This is my favorite Buzzcocks record—a masterpiece from start to finish. With the new fortieth anniversary re-issue of this, their amazing second LP from 1978, there’s a nice new remastering job and some fresh new liner notes to look at alongside this absolute monster of a record. Buzzcocks paired their trademarked buzzsaw punk guitar sound with devastatingly smart and masterfully crafted pop melodies to create an absolutely essential album that anyone worth their weight in safety pins should own and be intimately familiar with. I wish I didn’t love this record already so I could hear it again for the first time and fall in love with it all over again. Essential. –Mark Twistworthy (Domino)

BUZZCOCKS: Another Music in a Different Kitchen: CD
As I write this, it has only been a month since the untimely passing of the Buzzcocks’ lead vocalist and co-founder Pete Shelley. A reissue of this seminal debut album was announced for a January 2019 release which now also serves as a tribute since the beloved Shelley died before the release date. While there’s nothing new to report on about the album’s physical contents (artwork and track listing are all the same as previous issues) the impact and legacy of this record is as significant today as it was forty years ago. It is still the blueprint for what would later be known as “pop punk” and I dare anyone from Sum 41 to Radioactivity to say that this album or band has not in some way influenced their sound. Hell, even hardcore bands like Gorilla Biscuits and SSD have paid tribute to the Buzzcocks. The tracks on Another Music… include several of their best known hits such as “I Don’t Mind,” “Autonomy,” and “Fast Cars,” some of which were previously released as singles, which I’m sure helped assert the record buyer a surefire bet that the album was well worth the cost. The palate cleansing “Moving away from the Pulse Beat” is a great way to wrap up an album that had us pogo-ing all over the place from the start. Perhaps the closing lyrics to “Sixteen Again” best summarize where music was at the time and Shelley and co.’s frustration with not really fitting in anywhere: “I hate modern music, disco, boogie, and pop. They go on and on, how I wish they would stop!” I’ll never stop spinning Buzzcocks records. Thanks for the music, Pete. –Juan Espinosa (Domino, dominorecordco.com)

KEPI GHOULIE AND THE COPYRIGHTS: Re-Animation Festival: LP
This is the second time Kepi has teamed up with an awesome band to redo an entire Ghoulies record. While there have been some reissues of the early records, this is a complete re-recording, a re-animation if you will. Before this, Kepi got together with The Accelerators to do Fun in the Dark and it was like giving the Mona Lisa a facelift—like when people remove any built-up gunk on masterpieces, refresh the colors, and restore a work of art in order to preserve it. This re-do of Re-Animation is just as fantastic, if not more so. What’s crazy to me is that this re-imagining of one of my favorite records (scout’s honor—my second tattoo ever was based off this record), actually makes me like The Copyrights more. I mean, I always enjoyed them just so, but in this record I can hear those harmonized backup vocals and heavy guitar tones. I honestly can’t get over how good those backup vocals are. It sounds much like you might guess—a Copyrights record with Kepi singing Ghoulies songs. They add in some fun space laser sounds too. Kepi once told me about a time he was playing a solo show in Europe and as he was getting set up, the venue was playing Ghoulies songs over the PA in between bands. So he took that opportunity to do karaoke to his own songs. This is analogous to that experience, but even better. Somehow it’s so damned familiar and completely brand new at the same time. It’s the Kepirights. A must have for a fan of either, or both. –Kayla Greet (Stardumb)

S.B.F.: Same Beat Forever: 12”
Damn, when the first bands a recording makes you think of are The Screamers, Criminal Damage, and Cro-Mags, you know you just came across the good stuff. Juan said “Lumpy Records.” Rene said “Total Control.” More road signs that all lead to greatness. It’s too rough and tough to be pretentious, and too well thought out to be meathead drivel. “Play to Win” makes me want to throw my chair at the wall, and I love my chair! Half-robot, half-man, all-beast; the purists may be disgusted by this, due to the use of a drum machine, but I think a majority of you all will find it quite compelling. Highly recommended. –Daryl (Neck Chop)

SPIRITUAL CRAMP: Television: LP
Subtitled “4 NEW SONGS 2 COVERS AND 2 EP’S,” this album and band intrigue me somewhat simply because they manage to remind me at times of Fugazi, the Talking Heads, and Gang Of Four, and yet I still like them. They sorta sound like what I imagine you’d get if the aforementioned bands lived in the vats in San Francisco and mated with Flipper and then the offspring of this union decided they didn’t want to be quite so fucking indulgent and annoying as their parents. These tunes are sledgehammer mutterings of demi-cryptic alienation and paranoia. And that’s the best kind of alienation and paranoia there is! BEST SONG: “Wrecking Crew.” BEST SONG TITLE: “Northern Soul Search.” FANTASTIC AMAZING TRIVIA FACT: The lyric sheet uses all capital letters and no apostrophes. –Rev. Nørb (Deranged)

VARIOUS ARTISTS: One Family One Flag: 3 x LP
Most folks in the punk scene do it for love. Few make a job and career of it, and almost none are able to support friends, bands, and families from it. Skippy (who runs Pirates Press) just moved forward with a smile on his face and a belief in his friends and their bands. Fast forward fifteen years and his label and company have been at the forefront of quality punk releases—and in many ways the resurgence of vinyl in America (he also employs a pile of my mates). This compilation is a testament to his hard work and a celebration of his label. Too many to mention, but if you like Cock Sparrer, Noiise, Old Firm Casuals, Bishops Green, Off With Their Heads, Rancid et. al there’s a something here for you. It’s definitely on the street punk/oi side of things, but the very best of it. No filler, all killer. We love you Skippy. Congrats, mate! This would be the disc you should give your young cousin getting into punk. –Tim Brooks (Pirates Press, piratespressrecords.com)

VIOLENCE CREEPS: “Nephew Melting” b/w “Ford Go Bikes”: 7”
The two tracks on this single are scathing condemnations of “washed-up never-was” rock bros and the “stroller yuppies and Wes Anderson fucks” of Oakland, respectively. Violence Creeps deliver their indictments in plain language—lines like “you shit on female punks, you fuckin’ make me sick / Then, you snitch, you went and sucked La Migra’s dick” leave no room for misinterpretation. The music is steeped in caustic dissonance, bass and guitar lurching in different directions only to crash back together seconds later. “Nephew Melting” is gleefully snotty, while “Ford Go Bikes” is more of a grinding dirge—both are fucked up and great. –Indiana Laub (Total Punk, [email protected], floridasdying.com)

///
All of these reviews and many, many more are printed in a handy-dandy zine that you can subscribe to at a reasonable price, delivered to your door. Click the link below.
///