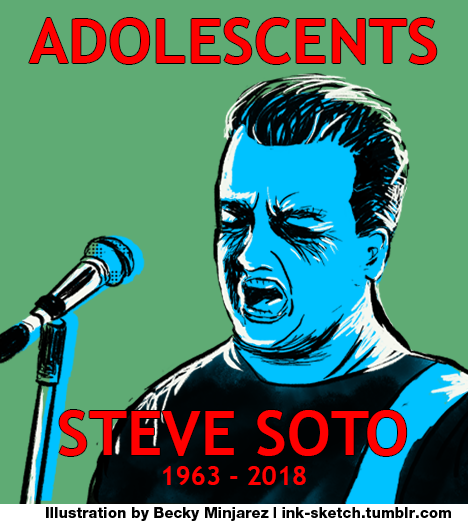 ADOLESCENTS: Cropduster: LP
This is an incredibly hard review to write. As I am sure you are aware, legendary Adolescents bass player Steve Soto passed away just prior to the release of this album. Will this be the final Adolescents album? Only time will tell, but I do know that if it is, it is a fine way to cap off an extraordinary band. In the modern era of punk rock, we have seen many of the original bands get back together in varying capacities, but none have been more prolific and continuously great than the Adolescents. Since their return with 2005’s OC Confidential, the band released five more albums bursting with songs both well written and incredibly topical. How can you call it a reunion act when they have consistently shown that they are better now than they were in their heyday? That is a bold statement and you should know I make it seriously. I consider them to be the best band to come out of Southern California during that era. Cropduster is taking our current situation to task. Vitriol has never been so easy to sing along with, and if there was any doubt who the main target is, look no further than the cover art depicting Forty-five literally cropdusting a crowd of Americans. This album is the Adolescents at their finest. Rest in Peace, Steve. Thank you for leaving us with one more amazing album. –Ty Stranglehold (Concrete Jungle)

BAD SPORTS: Constant Stimulation: LP
Bad Sports are a deceptively unique band. Sure, on the surface, they’re a trio of Texan punk rockers with a laundry list of former and other current bands that you should already have in your record collection, but there is a magic about the music these guys create together. They have a knack for being able to seamlessly switch up sounds—from garage punk to straight-up classic rock, from Ramones-influenced pop to the goddamn British Invasion—from song to song and no matter what it is, they nail it perfectly. Of course, everything is filtered through their patented take-no-bullshit attitude. Constant Stimulation is the band’s fourth LP (I consider 2016’s amazing Living with Secrets to be more of a mini-album) and without a word of exaggeration, it is my favorite. I play it over and over hearing new cool parts all over the place. Most of the songs here are mid-tempo burners with impeccable songwriting. Bad Sports are the modern definition of rock’n’roll. As much as I can see a punk rock guy getting way into this (especially if I were to look in a mirror), I could see normal people latching on as well. If it were to happen, maybe there would still be a tiny piece of me that would be pissed about it but, in reality, the adult in me would say, “No shit. They’re really that fucking good!” Everyone needs this record in their collection. –Ty Stranglehold (Dirtnap)

CHILL PARENTS: Hail ACAB: CS
Okay, wow I love the way that Chill Parent’s songwriting and sonic curating has evolved. Still melodic and thrashy like their demos, but Hail ACAB is more brooding, vulnerable, and polished in ways that remind me of RVIVR, early Title Fight, and even at times the less ska moments of Leftöver Crack. A standout moment for me is the transition between “Crystal Palace” and “Hold My Head,” which blends an iconic prison recording of Angela Davis over sparse drums that build like a call to action—internally and communally—as Davis recalls the sounds of bombs shaking over her childhood home in Birmingham, Alabama while contemplating the role of violence in black liberation. I love how Hail ACAB is put together in a sort of pastiche way, incorporating live performances, demo style recordings, and samples. It’s a risky move, but pays off, feeling like an inspired collection. This tape is contemplative, intellectual, and aggressive, without ever being macho or condescending. It also does something rare for politically driven DIY: it maintains a sense of joy even in the dark. Highly recommend. –Candace Hansen (chillparents.bandcamp.com/album/hail-acab)

DIMBER: Sons and Daughters: 7”
Okay, is there anyone else in L.A. doing high energy, aggressively politically conscious pop punk that traverses dark emotional pop and classic punk with relentless undertones of hope? Building on the energy laid in their debut Damber, Dimber’s Sons and Daughters is more brooding and melodramatic, familiar in Pavlovian ways for those with the embodied vocabulary to decode it. Leads are complex and tasteful; lyrics poetic, real, and raw. Frontwoman CJ doesn’t need to scream for the severity of “though I try to hide they always find me, how do they always find me” to land like a fucking jackknife. Absolutely beautiful. –Candace Hansen (Chain Letter Collective)

MÜLLTÜTE: Self-titled: LP
Second full-length from this German terrorist cell. Like a dirty bomb of unconventional, trendless hardcore punk, this record just decimates every corny fest lineup and nostalgic reunion tour your buddy’s younger sibling is really excited about. Scummy, sharp guitars and barked German vocals. It’s Welcome to 1984 in 2018; the rules were never created. Twelve years ago, a Swedish band named Svartenbrandt released a fourteen minute masterpiece called Från Andra Sidan Spåren. I’ve never heard a band that I felt was comparable to them until I heard Mülltüte. For those keeping score at home, that’s a grand slam of a recommendation. Get this record and erase all the preconceptions you’ve been indoctrinated with. –Daryl (Self-released, [email protected])

NIGHT BIRDS: Roll Credits: CD
What can I say that hasn’t already been said about the genius of New Jersey horror-surf-punk prodigies Night Birds? There are very few bands I can think of where I am certain that I will not be let down by any of their records. Roll Credits continues right where Mutiny at Muscle Beach left off, if not surpassing it entirely. This may or may not have something to do with the return of founding member Mike Hunchback and his contributions to the writing and performing on this record. It should bear mentioning that as loyal as Night Birds are to their influences, and punk in general, they are even more loyal to their friends, some of which they commissioned to contribute artwork for the album and include Marissa Paternoster (Screaming Females), Nathan Gattis (Tarantüla, Cülo), Paul D’Elia (Rough Kids, Tear It Up), and Chris Shary (Descendents T-shirt artist). As if this album needed any more selling points, the songs “Radium Girls” and “Onward to Obscurity” feature guest vocals by Kate Eldridge (Big Eyes) and Jerry A. (fuckin’ Poison Idea. Are you fucking kidding me?) respectively. I am not exaggerating when I say that “My Dad Is the BTK” is a song that kids will be covering in their garages and basements twenty years from now. Yo, who wants to give me the Night Birds dagger tattoo? I’m on board for life. –Juan Espinosa (Fat)

TOMMY & THE COMMIES: Here Come...: CD
Those familiar with the scene in the Northern Canadian city of Sudbury, Ontario, Canada would have at some point—one way or another—come across the Houle brothers. Jeff and Mitch have been at it for years, and are most certainly the jewel of “the big nickel” (Sudbury is traditionally a mining town). Being with Statues, Strange Attractor, Mick Futures, Varge and now the topical Tommy And The Commies, these two can interchange between instruments and nail each of them flawlessly. Now backing Tommy, with Jeff on bass/vox and Mitch on drums, it seems like a match made in heaven. Something about this current project just works. Originally a four piece, they’ve now paired it down to three, which somehow seems to work even better. Here Come..., not unlike the Statues records, is heavily U.K.-influenced. These eight tunes have a very specific Jam/Buzzcocks sound to them, and most importantly, is far from anything cliché or corny. Which, it’s important to note, is extremely difficult to do when attacking this sound, so credit given when due. The production isn’t intentionally über vintage sounding, but is thin enough and clean enough where it suits the sound just right. “Hurtin’ Boys” and “Permanent Fixture” are the current tracks that seem to be in my head most frequently, but there isn’t anything close to a dud here. I could go on, but I won’t. Heavy contender for the record of the year. –Steve Adamyk (Slovenly, slovenly.com)

VARIOUS ARTISTS: Turn It Around: The Story of East Bay Punk: 2 x LP
You know, before listening to this comp, I’d have thought the soundtrack would just basically be The Thing that Ate Floyd meets Life in the Fat Lane with a bit of Not So Quiet on the Western Front. But much like the accompanying documentary, I was pleasantly surprised. It’s pretty rare that someone takes a microscope to a subculture you’re involved in and gets it right. They can’t all be The Decline of Western Civilization. I pre-ordered the DVD and double LP as soon as I was able to and I have to say I was not at all disappointed. A little shocked to see Sammytown and Fang involved in the project, but is it really an East Bay doc without them? I can appreciate their dedication to tell a full story. The soundtrack is quite literally a reflection of the film. These are the whole version of songs that only got a snippet in the movie. It doesn’t just zero in on Gilman bands or MRR bands. They start out in the early ’70s and lay down roots for the East Bay like The Tubes, Psycotic Pineapple, and Crime before focusing on Crimpshrine, Tilt, and MDC. I love this comp because it doesn’t pretend that East Bay punk only existed in one time or one place. It’s a quick history lesson of a scene of bands who were very much aware of each other. I also really appreciate that many of the songs are specific to the area: “Condition Oakland,” “Berkeley Is My Baby,” “The List,” “At Gilman Street.” Finally someone took the care to do it with punks in mind. –Kayla Greet (1-2-3-4 Go!)