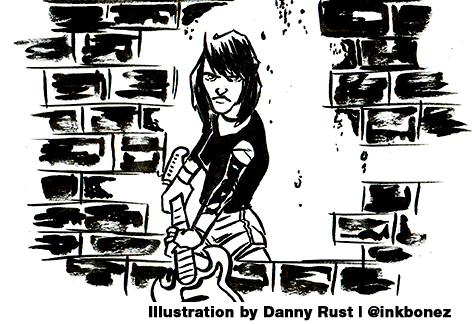 TOMAR CONTROL: Nunca Más Callar: LP
This record fucking rips. It is everything I want: righteous, radical, rowdy lady-centric fast-paced punk from Peru that is rooted in a clear rejection of the government and gendered oppression while making it obvious that they came here to kill it. Only one song that’s over three minutes, I imagine this is quite the live show and I really hope to catch it someday. Someone get these folks on a U.S. tour, please. I bet they will have some excellent things to say about Trump. –Theresa W. (Amok)

CHARLES ALBRIGHT: Everything Went Charles Albright: LP
Wow! This is fantastic! File between Attempted Suicide and The Catburglars’ LP. Ruthlessly catchy hardcore punk that’s jam-packed with energy, monumental passages of feedback, and tongue-in-cheek lyrics. If you’re the kinda freak who daydreams about The Dirtbombs covering The Zero Boys, hightail it to your local vinyl retailer and pick up this record. I’ve seen the name “Charles Albright” around for a long time, but I didn’t think this is what it sounded like. Went back and listened to previous material, and it doesn’t! Not to diminish the previous work, but this is by far the best shit. –Daryl (Sacramento)

DUDERELLA: Utopia: CS
L.A. two-piece that sounds like the intersection of 6th and Alvarado, or Kurdt and Brody, or fuckin’ godheadSilo and a goddamn twisted drag show. It feels like futuristic music from the ’90s. Like the band that would be playing a berserk warehouse party in Johnny Mnemonic or Strange Days, but it’s real life and we are living in the dystopic, surveillance state hell realm and Duderella is playing a berserk warehouse party! Follow Daniel and Chris as they create their own world with their own unique sound consisting of bass and drums and other freaky noises. Pop this tape in and subvert the hegemony. –Daryl (Self-released, duderella.bandcamp.com)

FETISH: World Eater: CD
Fetish from Portland boasts quite the pedigree of hardcore punk personnel. With members of gods Poison Idea and stalwarts Long Knife you better believe you’re in for an ass whooping. Nine songs of proven track record hardcore punk with a healthy mix of rockin’ stompers and hardcore moshers all with vocalist Colin Jarrell’s patented acid-throated, rapid fire vocal delivery. The song “Voyager” is a fucking journey. Take that however you will. Nightmare-inducing cover artwork rounds out a solid fucking punk record that I’m sure will make several top ten of 2019 lists. Speaking of nightmare-inducing: the band photo on the CD booklet. Man, if I didn’t know these guys were hardcore punk legends I’d probably turn and run the other way if I saw these dudes walking towards me. –Juan Espinosa (Blackhouse, blackhouserecordsinc.com)

FRIEND OF MY YOUTH: Telling: LP
YES, YES, YES. As soon as I heard the first strums of the intro to song one, “Soft Sci-Fi,” I was in love. Santa Barbara, Calif. is home for part of this band, and my hometown as well (they also list Corvallis, Ore. as home). I didn’t know they were from there when I listened to this, so I promise I’m not being biased when I say that this album is so good. It’s heartfelt melodic indie punk that I know I will be playing on repeat this Fall season. The tempos are perfect and hit that late summer/early autumn emotion, while the lyrics are earnest, sincere, heavy, and relatable. The flow from start to finish is consistent, and vocalist/guitarist Indiana’s voice is dynamic and engaging. I really love that the LP is pressed on the most gorgeous shade of Coke bottle clear that reminds me of the sea foam waves back home that Santa Barbara is known for, and in small world fashion, the album photo was taken by my friend Josh. Again, I swear I’m not being biased, but this album is the best I’ve heard in a while. –Cynthia Pinedo (Salinas / Secret Pennies)

MOVING TARGETS: Wires: CD
By all rights this should be terrible. Bands with much higher profiles have come back from the abyss in recent years to much fanfare, only to deliver less than stellar work. So yeah, the deck is definitely stacked against this being of note. No recordings in twenty-six years, the last release being 1993’s Take This Ride. This latest salvo is instead fuggin’ aces stem to stern. They burn through fourteen new tunes, throughout making it sound like falling neatly between the best eras of Hüsker Dü and Mission Of Burma is just sooooo goddamned effortless. This is a stunner, one with actual songs and musicianship to spare, and worthy of high praise and lots of turntable time. –Jimmy Alvarado (Boss Tuneage, bosstuneage.com)

RADIOACTIVITY: Erased: 7”
A new record from Radioactivity is always cause for celebration. There is just something about the way Jeff Burke writes songs that is simply otherworldly. Every single project he is involved with has me feeling this way, but perhaps none are as distilled as Radioactivity. These two songs continue where the last single on Wild Honey left off. Feelings of loss and alienation run through both tracks (I will admit this is just my take away, as I still cannot understand what he is singing a good portion of the time). There is a phenomenon that I have named “nerd tears.” It is kind of like when something is so great that it makes the hairs on your neck or arms stand up. I get that times a million and it results in me tearing up a bit when I hear a song or read a book or watch a movie that really excites me. It happens every single time I listen to Radioactivity. I love this so much. Where is album #3? –Ty Stranglehold (Wild Honey, wildhoneyrecords.bandcamp.com)

SNUFF: There’s a Lot of It About: CD
I thought the first few Snuff records were pretty great. Reach didn’t do a ton for me, but I followed their post-breakup doings like Guns ‘n’ Wankers up through the mid-’90s. I lost interest when the band re-formed; I figured they’d already been more or less swept to the side by all the other cool crap happening then, so what was the point, really? Therefore, I’m kinda devoid of context as to where this release stands in relation to their last quarter-century of output: Is it a crushing disappointment after the masterful strokes of their last musical venture? Is it an invigorating return to form from a band who had long been thought to have lost their way? In any event, my initial impressions as a Lapsed Snuff Fan are this: 1) Holy crap, Duncan’s vocals are still the most amazingly full-blast things in the earthly history of full-blastness, 2) It still amazes me how this band can be so together, yet simultaneously sound like they’re one wobble away from tipping over, 3) As evinced by the fact that their best record, Flibbidydibbidydob, is mostly covers and advertising jingles, this band tends to do its best work when it has the seed crystal of a previously existing idea on which to sprout and mutate; “Hey, Boff!” certainly owes a debt to “She’s Got Everything” by the Kinks, but you’d really have to be a dick not to like it, and 4) I guess I should probably start paying attention to Snuff again. BEST SONG: “Hey, Boff! BEST SONG TITLE: “Kings of the Spanish Oi Scene.” FANTASTIC AMAZING TRIVIA FACT: Duncan is the only guy left from the lineup that stayed at my house like thirty years ago. –Rev. Nørb (Fat, fatwreck.com)

SNUGGLE!: Holiday Heart: 12”
The first time I went to Chattanooga, my band played in the smoke-filled ballroom of a run-down hotel. I remember standing on the floor and looking around the balcony at the row of gnarly punks leaning on the railing and spilling beer on themselves in joy. All the bands played raw-throated, desperate, dirty-socked pop punk that kinda reminded me of Shotwell or Fifteen. Seattle’s Snuggle! would have rocked that show, and it’s taking me back to 2AM that night, when I was holding the promoter’s feet while he leaned backwards out his living room window, shooting bottle rockets out of his mouth to burst in the damp Tennessee night. –Chris Terry (Dead Broke, snuggle1.bandcamp.com)

SUBHUMANS: Crisis Point: LP
The Subhumans have been punk longer than me, you, or most people any of us know. Dick Lucas is a punk rock lifer and has toured the world over in—not only Subhumans but also in Citizen Fish and Culture Shock—and doesn’t appear to plan on quitting anytime soon. Crisis Point is eleven brand new tracks of the punk and ska you have come to know and love from the masters. It can be argued that these songs don’t hold a candle to The Day the Country Died or From the Cradle to the Grave but the only people saying stupid shit like that are people who checked out of punk long ago. There’s a reason the Subhumans are still doing it not for the money after all these years and this record is further proof that they are still pissed, still care about causes worth caring about, and will keep doing us true believers proud. Included with this record is a fold-out stencil of the band’s name to fulfill all your vandalism needs. I love this album and will always love the Subhumans. –Juan Espinosa (Pirates Press, piratespressrecords.com)