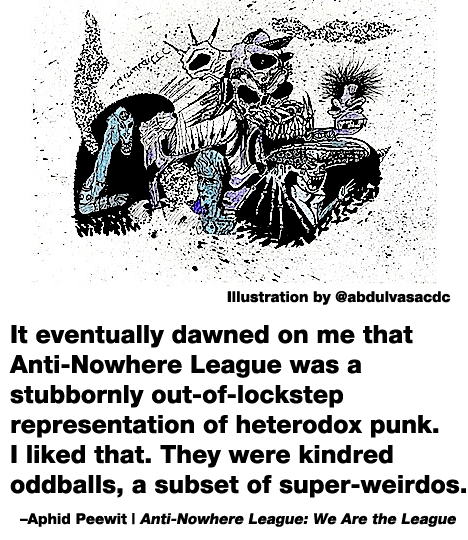 Featured movie reviews Razorcake 115: Anti-Nowhere League: We Are the League and Rudeboy

Anti-Nowhere League: We Are the League: DVD/CD

For the longest time I never knew what to make of Anti-Nowhere League; they always seemed to get lumped in with the stalwarts of early ’80s Brit hardcore like Discharge, G.B.H, and the Exploited, however ancillary that relationship may have been. But they stood out in my mind because, unlike those bands, they never sported the officially sanctioned hardcore look. No colorful Mohican or porcupine hairdos. Instead, they wore top hats and gay biker hats with short hair and came across as slightly fetishy low-rent goons, each a walking menagerie of nits and unusual rashes. With their striped shirts and gobs frozen into exaggerated snarls, they had the petty criminal charm of any gang of henchmen on the old ’60s Batman show. I could even picture the ANL lair with floors tilted at angles no innocent person would architecturally allow. And of course, they were fronted by this loutish biker dude wearing crisscrossing chains like a vest and menacingly clutching a large ax for some reason, who would’ve seemed out of place at a punk show if he wasn’t surrounded by his similarly misfit bandmates. All in all, they seemed like Motörhead’s filthier little brothers, with a biker/skinhead/punk twist.

It eventually dawned on me that Anti-Nowhere League was a stubbornly out-of-lockstep representation of heterodox punk. I liked that. They were kindred oddballs, a subset of super-weirdos within the larger group of regular weirdos, and for that reason alone, I owed them a listen. It didn’t take long before I found myself in heated arguments with Metallica fans about whose version of the politically incorrect classic “So What” is better.

We Are the League is the ANL documentary I always wished existed. It presents the infamous oddball “anti-band” from Tunbridge Wells warts and all, including sordid carrots-up-rectum stories, frank recountings of racially-tinged band tensions, and even an unflinching look at their incongruous stumble into Tears-For-Fears-like sensitive, soft metal realms with the release of their Perfect Crime album in the late ’80s. Included with the DVD is a CD of raw live recordings from 1982 featuring ripping renditions of their early classics along with hilarious samples of snide audience baiting.

I would recommend, before sitting down to watch this DVD, perhaps cleaning the wax deposits out of your ears as the British accents presented are brogue-ishly thick and laced with sometimes inscrutable slang; not to the point of listening to a Wattie interview where you actually need subtitles, but attentive listening is probably required.

It could be said, given that the subject of this documentary is a band notorious for its low-brow crudeness, that this is a surprisingly well-crafted film. Even more surprising might be that the blokes in the band come across as genuinely affable chaps, whether having had their barbs shaved down by advancing age or clever editing.

Seriously imposing and yet self-deprecating at the same time, Anti-Nowhere League is a grimy enigma in leather and this film gives you a gritty look at the goons behind the legend, free of any threat of being bit or gobbed on. Essential viewing. –Aphid Peewit (MVDvisual.com)

Rude Boy opens with a quote from D.J./filmmaker Don Letts: “Music is an open letter to the world…” It might sound corny, but that bit of optimism sets the tone for this documentary about one of the most iconic record labels in the world. The timeline begins with Jamaica’s independence from Brittan in 1962 and the rise of the sound system. Late-night parties staved off some of the stress of financial struggles and political uncertainty. Anecdotes in the film range from massive parties, unshakable gangsters, and serious competition to acquire new records and equipment. Talking heads include some of the most influential living reggae icons. Producer Bunny Lee, singer Derrick Morgan, filmmaker Don Letts, and Selecter vocalist Pauline Black are among those illuminating the details as both fans and participants. The stories are told with enthusiasm. Despite some of the bravado, participants come across as understanding they are part of something bigger than themselves.

Trojan was born out of mass immigration to London. Between 1955 and 1963 over 100, 000 Jamaicans relocated to England. This phenomenon brought reggae and rocksteady to the youth of England. Street cred elevated demand. Trojan began as a small distro in 1968 and ended in 1975 under the typical weight of problems and financial burdens. In just a few years they became the face of ska, reggae, and rocksteady. This film covers some well-worn territory with fresh attitude. If you know the basic narrative already, it fills in the holes nicely. If you don’t, it’s a compelling and efficient film about the rise and fall of an icon told without excessive drama. It’s sad some people got screwed in this process, but I walked away from this telling with a positive attitude. –Billups Allen (Pulse Films)

Many music-related documentaries are being released these days and we should all be very grateful. A lot of those documentaries are informational, yes, but all kind of follow the same formula: fast-paced interviews with archived footage of whatever events the subject matter or narrator mentions.

Rudeboy takes a slightly different approach. First, there is no narrator. The narrative is done by the musicians, producers, and people involved in the rise and fall of Trojan Records. And during those interviews, there is some archive footage here and there. But the majority of what you see is dramatic recreations of whatever story is being told. In those recreations, there is little to no dialogue and the cinematography is great.

The documentary starts in Jamaica in the ’50s, where instead of people filling a room to see a band perform, they would flock to the place with the best sound system and DJ spinning the best records. Then it takes us to the U.K. in the ’60s where two record store employees took their mutual interest in Jamaican music to the next level by starting a record label. They hit up all the producers in Jamaica to release records through Trojan, hence introducing a bunch of British youngsters to a new sound that made them want to shake their butts.

There are many great and deep interviews with folks that were around Trojan Records before day one, including Bunny Lee, Derrick Morgan, Toots Hibert, wild-man Lee “Scratch” Perry, and Roy Ellis (Symarip), who cuts quite a rug in this movie. There are also some memorable interviews with Neville Staple (The Specials), documentarian Don Letts (Big Audio Dynamite), and Pauline Black (The Selecter).

Without giving a whole lot away, in this documentary, you will learn how Millie Small put ska on the charts, what a rudeboy actually is, why politician Enoch Powell is a piece of shit, why skinheads carried around copies of Tighten Up Volume 2 under their arms, and why the staff at Trojan Records had to go out back and smash their records every once in a while.

Rudeboy was released last year via streaming services (for some reason it’s rated NC-17 on Amazon) but has yet to get a physical release other than a soundtrack. I would be hyped to see what special features or extended interviews would exist on a DVD or Blu-ray. Or at least more footage of Roy Ellis dancing around an empty warehouse. –Rick V. (Pulse Films, pulsefilms.com)