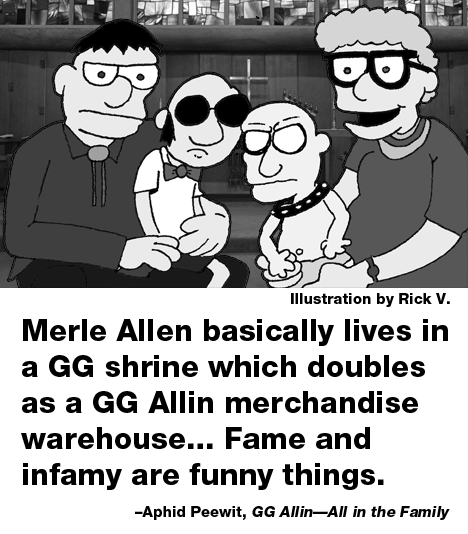 Featured DVD Reviews Razorcake 114: GG Allin—All in the Family, Bill Direen: A Memory of Others

GG Allin—All in the Family: DVD

As a new age of barbarism is dawning across America, it seems like a good time to drop in on everyone’s favorite punk rock barbarian, GG Allin. And though the new documentary GG Allin: All in the Family gives no indication of GG’s possible political leanings—a true anarcho-primitivist nihilist is not easily plotted on the conventional left/right political spectrum—it’s intriguing to speculate if GG could be claimed by the barbarians of the Alt Right now that they’ve asserted republicanism as “the new punk rock.” His mongoloid misogynism is guaranteed to set off a million #MeToo alarms and not even the most primped and pumped-up Proud Boy could touch him in raw yobbish political incorrectness. “GG Allin, Conservative Icon” may sound absurd at first, but is anything really absurd anymore in the socio-political realm?

Unlike Todd Phillip’s 1993 GG documentary Hated, where the Allin family was a mere footnote to Kevin Allin’s Rock’n’roll Terrorist act, what’s front and center here is, as the punny title states: ALLIN, the family. That would be brother Merle, GG’s mom Arleta and, to a lesser extant, the damaged drummer Dino Sex. Each is shown going about their post-GG life, each dealing with their grief with their own reconstructive narratives, as the psychologists say. It would be oversimplified, but it could be crudely said that the spirit of Kevin primarily lives on through the filtered memories of Arleta, while the spirit of GG primarily lives on through the filtered memories of Merle. Each has chosen their own ghost to haunt them.

Merle, for example, basically lives in a GG shrine which doubles as a GG Allin merchandise warehouse. And incidentally, Merle is in the privileged position, solely because of his infamous brother, of being able to profit from scooping his own mushy grunt-pie out of the toilet, brushing it onto a canvas and selling that canvas as an object d’art. Similar to how Donny Trump Jr. is—solely due to his relationship to the pear-shaped plutocrat currently infesting the White House—able to scoop the brain turds from his own cranial cavity, compress them into book form, and profit from it. Fame and infamy are funny things.

No concrete answers are given to the question of what caused Kevin to transmogrify into GG. That mystery is left hanging like a pair of besmirched underpants on Arleta’s clothesline. But disturbing hints are dropped about Merle Sr., GG and Merle’s father, who looms over this film like a twisted specter and who only peeks out of the interstices of the storyline briefly. One can only guess what sort of “Daddy-Dearest” secrets disappeared with that kook.

If TV execs are paying attention: this fascinating, almost Dadaistic showcase of the Allin family should be fleshed out into a TV series, one that would make The Osbournes look like Leave It to Beaver. And then maybe Merle, Arleta, and Dino can be the new Reality TV family to finally dislodge our embarrassing national fixation on the Kardashians. I think that would make GG proud. –Aphid Peewit (MVD visual, MVDvisual.com)


Bill Direen: A Memory of Others: DVD

Two types of music documentary are becoming very formulaic. One is the obligatory doc about a seminal band with a boring origin story. The second is a documentary about how mainstream success has eluded some artist. In A Memory of Others, director Simon Ogston dodges the typical pitfalls of the latter while still exposing the enigmatic career of Bill Direen to a larger audience. Ogston breaks from convention, not by dramatically categorizing the ups and downs of Direen’s career in a conventional timeline, but instead choosing to showcase Direen’s phases based on the flow of their discussions.

Direen is New Zealand’s punk-Shakespeare, similar to John Cooper Clarke or Jim Carroll. He’s played in punk bands, written poetry, and done experimental theater. Direen is a humble optimist with rough charisma. Ogston follows Direen on a recent tour of coffee houses, art spaces, and small bars in New Zealand. Direen makes music, gives talks, and reads poetry in front of small gatherings of enthusiastic fans, all the while gently proselytizing about what it means to be an artist through discussions about his career.

Ogston takes a refreshing turn by utilizing few talking head interviews and their footage of the New Zealand landscape is masterful. The only frustration with the film comes with the decision to tell the story out of order. There is no cataloguing of bands’ eras, more or less. As the film unfolds, it makes sense in congress with Direen’s attitude towards art. The film paints a portrait of an interesting artist and a nice guy who is relatively happy with what his compulsion to create has brought him in life. He’s an inspiring man and the film does Direen’s attitude justice. –Billups Allen (Self-released)


These reviews and many, many more are printed in a zine that you can subscribe to at a reasonable price, delivered to your door. Click the link below to help Razorcake stay in afloat.