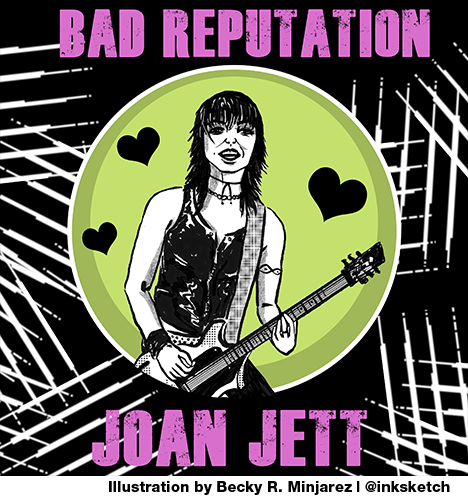 This is a documentary about modern day saint of rock’n’roll, Joan Jett. She had one goal ever since she received a crappy electric guitar from Sears as a gift as a preteen: to play in a band. The film starts with Jett discovering weirdos at Rodney Bingenheimer’s English Disco where she met corrupt Kim Fowley, who throws her in the Runaways. This documentary fills a gap that Edgeplay: A Film about the Runaways (2004) left due to Joan Jett’s refusal to be a part of it. This time we get to hear Runaways songs and see footage of their European and Japan tours. There is a lot of interesting stuff about Joan and the final days the Runaways. Did you know she hung around in the England punk scene and recorded the first version of “I Love Rock N’ Roll” with Steve Jones and Paul Cook of the Sex Pistols? And did you know she had a heart attack in her early twenties?

Joan Jett had to put away her bad habits and turn her life around at an extremely early age. But that still didn’t make it any easier for her to get radio stations or record labels to pay attention to her music. She grew up in the 1970s when radio stations were told to only play one woman artist per hour. Jett and her lifelong producer Kenny Laguna started their own label and were the early adopters of selling records at shows. Although Jett was considered a major label artist, she did a lot with punk bands, like producing the Germs record, singing for the Gits, and being real tight with Bikini Kill.

Most rock documentaries usually have an act in the middle showing where things get dark for the subject matter. I feel like Bad Reputation doesn’t focus on that. Joan is usually positive about the dips in her career and, for the most part, just wants to keep going. There is a huge list of people I like saying nice things about Joan Jett: Don Bolles, Debbie Harry, B.J. Armstrong, Kathleen Hanna, Adam Horovitz, Ian MacKaye, Mike Ness, Laura Jane Grace, Shepard Fairey, Pat Smear, and Michael J. Fox.

If you weren’t a fan of Joan Jett before seeing this, you will definitely have a mantle dedicated to her afterwards. I’ll end with a quote from Razorcake contributor Ben Snakepit. “At the end I was bawling like Holly Hunter in Raising Arizona, ‘I love her so much!’” –Rick V. (badreputationfilm.com)

Released in 2017, this is the first legit U.S. release of D.O.A.: A Rite of Passage, which was originally shot in 1978. The documentary started as an attempt to capture the Sex Pistols first (and subsequently last) U.S. tour by High Times magazine founder Tom Forçade. The film contains great raw footage of the Sex Pistols and their audiences. The crowd was about two-thirds punks and punks trying hard to be punks. That final third was people who bought tickets just to throw bottles or fight the Sex Pistols. There are some pretty wild interviews with some of the kids who came to the shows or were just hanging around at the time. Most notable are a moody kid with tape stuck in the shape of an “X” on their face and a woman just lying on the ground in the parking lot complaining about security.

The Sex Pistols U.S. tour footage only makes up about half of the documentary. Scattered throughout, there’s footage from England capturing the natural habitat of the ’70s fashion punk. This best stuff is shot in these segments, including awesome clips of actual enjoyable bands like X-Ray Spex, Generation X, the Rich Kids, Sham 69, and of course Terry And The Idiots. You’ve never heard of Terry And The Idiots? Well, they’re real bad and their frontman Terry Sylvester is worse. He makes for great content in the film, along with an interview with a very high and sleepy Sid Vicious and Nancy Spungen.

Throughout the documentary you get: southerners mourning Elvis, a nameless band with a nun playing a harmonica, a kid playing with a rope, a self-described “Anti-Smut Crusader,” and the Sex Pistols’ dumb lyrics subtitled during their shows.

The standout special feature on this DVD/Blu-ray set is Dead On Arrival: The Punk Documentary That Almost Never Was—a feature length documentary about the antics that went around filming the movie. You see, Tom Forcade had everything he would need to put the original documentary together. He got director Lech Kowalski, a couple of 16mm cameras, and an Atlanta film crew. However, he had no actual access to the shows or the members of the band. The Sex Pistols were apparently surrounded by hired biker bodyguards, their eccentric manager Malcolm McLaren, and executives from Warner Brothers Records. They had to disguise themselves as reporters to get into the shows. John Holmstrom and Roberta Bayley of Punk magazine fame tagged along with the film crew on that tour and regale some hilarious and horrifying experiences. There is even an interview with Lamar St. John (The previously mentioned woman laying down the parking lot) who drove from San Francisco to Texas with her friends to see the Sex Pistols.

The documentary about the documentary was much more educational and I highly recommend watching it if you are into punk history. John Holmstrom is like a human ’70s punk database. –Rick V. (MVD Visual, mvdvisual.com)

These reviews and many, many more are printed in a handy-dandy zine that you can subscribe to at a reasonable price, delivered to your door. Click the link below.