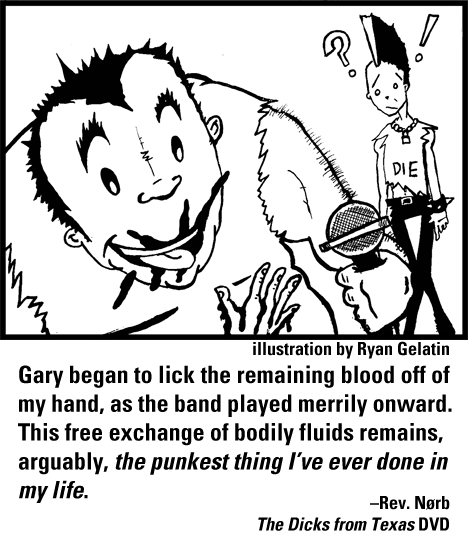 Featured DVD reviews from Issues 92 and 93

Dicks from Texas, The: DVD
One summer Sunday in 1984 following a (San Francisco/Lynn Perko-era) Dicks show in Oshkosh, Wis., some other locals and I were hanging out with the Dicks in a park on Lake Winnebago, and came upon a party hosted by a local hair salon. The party featured free beer and a rockabilly band; we consumed the first item heartily, and, when the second item had concluded their tour of duty, we somehow talked all parties concerned into letting the Dicks play an impromptu set on the rockabilly band’s equipment. A makeshift slam pit broke out somewhere around the picnic tables, and, as I stood at the front of the stage, a local oaf sailed into me from behind, driving me down to one knee. As the area in front of the makeshift stage area was loose stones, and I was wearing my rippiest pair of Ramones knee-hole jeans, this forced genuflection rent my knee asunder; blood poured everywhere. Utilizing the direct pressure method, I was soon able to bring things under control by pressing my hand on my knee, but the result of this self-administered first aid was that the palm of my hand was a bloody red mess. Not wishing to let a good bloody red mess go to waste, I lifted my hand in the air in an appropriately ridiculous wrestling gesture, and, as Gary Floyd sang on obliviously, THWAP!!!—I put a bloody red handprint smack dab in the middle of his kisser. Bloodied but not to be undone, Gary then began to lick the remaining blood off of my hand, as the band played merrily onward. This free exchange of bodily fluids remains, arguably, the punkest thing I’ve ever done in my life. This anecdote doesn’t have all that much to do with this film, really, but I just like telling the story. To this day, I know people whose favorite band remains the Dicks, and whose favorite record is Kill from the Heart. Obviously, much of the appeal is based in the mold-breaking character of frontman Gary Floyd, a huge gay dude who wore dresses and Mao buttons (and the occasional bloody handprint) in Texas in the late ‘70s and early ‘80s, back when such antics were mindblowingly radical. Needless to say, this documentary—the usual assemblage of talking heads, live footage, and vintage photos—is bolstered greatly by a continual stream of awesome Gary Floyd pics, as visual a frontman as they come. On the downside, there are a number of interviews conducted in bars that aren’t miked particularly well; bits of the dialogue were occasionally lost on me, although I did enjoy the way the Austin scene circa 1980 came across as a bunch of friends, who, to this day, are comfortable day-drinking together in bars. Other minor quibbles include the jerky editing of some interview scenes, and the absence of menu music. Get Dicked, kids. Get Dicked. –Rev. Nørb (MVD Visual, mvdvisual.com, thedicksfromtexas.com)


Dicks from Texas, The: DVD
Disclaimer: I hadn’t actually heard The Dicks until maybe three or four years ago, or whenever The Dicks Hate the Police 7” was reissued. I long thought Mudhoney’s “Hate the Police” was the original version of the apparently well-known song. The Dicks somehow flew under my radar for most of my record-buying adult life, but maybe that can be blamed on me being a born-and-raised East Coaster that spent almost ten years living in the Midwest, before moving to Texas and really digging into the local history. The Dicks from Texas doc does a good job capturing a time and a place, the magic of the early punk/hardcore scene of Austin, Texas. It has great footage that I never would have otherwise seen and new interviews with living members of the bands and many of their contemporaries.  The Dicks From Texas is obviously a labor of love for its creators, and it seems like they spent the better part of ten years making the doc (at least I think so, as there’s an interview with Big Boys front man Randy “Biscuit” Turner, who passed away in 2005.)

With the good, there’s bound to be some bad. So many people associated with The Dicks and the early Austin punk scene have passed away, many during the making of this documentary (there’s a section near the end that serves as a memorial to those who died, many whose interviews are featured.) I would love to know when production on the doc started and if it was done in fits and starts like it looks. I don’t know who of the old guard is or isn’t still around the Austin scene, but I would have liked to have heard from more of the members of The Big Boys, frequent playmates of The Dicks.

The sound mixing of the DVD is not good. Often, background sounds drown out the interviewees. Other times, the interviewees are seemingly “lubricated,” to possibly encourage reminiscing about the glory days of The Dicks, but they shout over each other and their words are drowned out. I reached out to the producers, asked about any potential problems they faced in making the doc, and what they wished they could have included but weren’t able to, but I never heard back. The bonus live footage is fantastic, as are the many photos and other snippets of concerts shown in the doc proper. There are two shows: one from 1982 and one from a show during the “Rock Against Reagan” tour in 1983. The doc is put together much like a DIY project. You can see the seams and the rough edges, but the love for The Dicks shines through. –Sal Lucci (MVD Entertainment Group, 203 Windsor Rd, Pottstown, PA 19464)