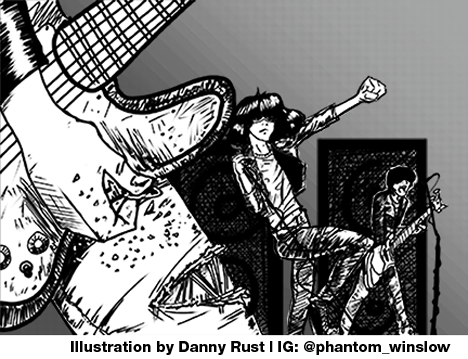 Why the Ramones Matter
By Donna Gaines, 138 pgs.

I’m not a Ramones scholar (looking at you, Dale) but I’ve read a fair number of books on the band, have watched documentaries, and, of course, have listened to all the records. Despite my admiration for the band and their work, I know there’s a saturation point with the Ramones—like the Sex Pistols and The Clash and so many of punk’s progenitors—buckets of ink have been spilled in critical appraisal of the quartet and their work. Coming in to this one, I wondered what might be left to say.

Author Donna Gaines addresses this, saying “(a)nyone reading a book on why the Ramones’ music matters already knows the answer and would probably rather spit up than discuss it.” From there, this head-spinning volume doesn’t discuss so much as it considers. After a chapter placing the band in the context of the ’70s, diametrically opposed to the prevalent FM radio dinosaurs, Gaines uses a number of broad topics/chapters to riff on the band. She understands that in discussing the Ramones, form must follow function: can you imagine the betrayal of a long-winded Ramones book? Neither can she. Salient points whiz by, buttressed by heady theoretical touchstones like Adorno and Sartre.

Take the chapter titled PAF, which initially appears to be a discussion about how the band are Punk As Fuck. In this segment, she jumps from anomie (“the condition of normlessness”) to punk as a response to post-World War II norm culture to the identities inherent in Judiasm to trauma to individualism to DIY culture. Phew! It sounds like a lot—it sounds laborious—but Gaines has the uncanny ability to weave these disparate short threads together into a greater piece of work. The buzzsaw pace of her ideas, like songs on Ramones albums, demand that you dive back in and check again.

This is the second entry in University of Texas Press’s “Music Matters” series, a collection of small-ish books devoted to single bands. If this one is any indication, I’m sure the rest of the series are bangers (yes, even the Karen Carpenter volume). Here, Donna Gaines has taken the lightning-fast songs of the Ramones’ oeuvre and welded her own brainy spin on their songs, their personalities, their impact, resulting in something unequivocally fresh and engrossing. Even the biggest fans will find something new to enjoy here.  –Michael T. Fournier (University of Texas Press, utpress.utexas.edu)

Think about the next big mass shooting. Think about the next time someone brings an AR-15 into a place where we could imagine ourselves—or our children—and opens fire, killing dozens of people who shouldn’t die that day. We all know it’s going to happen in the next year. Think about what you’re going to say when it happens. Because this is important: you already know. You have already reacted to this event. Your opinion is already formed. All of our opinions are. We have our tweets ready. The NRA has drafted their next speech. Political teams on both sides of the aisle have their press releases ready. Bumper stickers have been printed. But let’s say, hypothetically, that we want to live in a world where men don’t mow down dozens of strangers with assault rifles. How do we have a real conversation about change?

This is the challenge that Lisa Brackmann embraces in her latest thriller, Black Swan Rising. The novel begins with a woman being harassed before she’s even named. Sarah Price works social media for a congressional campaign. She also has a secret past. They, whoever they are, have found her. The harassment has restarted. She wonders if her past could derail her boss’s reelection campaign. Meanwhile, across town, local TV reporter Casey Cheng is covering a mass shooting when she gets shot. As part of her recovery, she sets out to investigate the aftermath of mass shootings. Her investigation reveals that her shooter aligned himself with a misogynist, neo-Nazi movement. There’s every reason to believe that more shootings are on the way, and both Sarah and Casey are targets.

All of this is established in the opening pages of the novel. Brackmann sets up a difficult tightrope. Sarah and Casey could easily become mouthpieces for the author; the book could easily become preachy and dull. It could feel like one more voice shouting at us from an entrenched position. Brackmann is too skilled for that. First, she makes Sarah and Casey feel real. They’re both flawed, confused, and trying to move through incredibly difficult circumstances. Sarah is not sure she has the courage to do what she needs to do. Casey may have too much courage. They both may end up dead. More to the point, you care about them staying alive. Second, even though the novel is built around a political campaign, the presumable Democrat (parties are never mentioned) is sweet and caring, but has violence issues and carries a gun. The Republican banks on racism but has a big heart. Both are at times likeable and despicable. The campaign takes a backseat to Sarah and Casey’s intersecting stories. Complicated issues are raised and moral decision must be made. And there are so many guns. And always too many shootings. Through it all, the plot moves like a roller coaster. You get pinned to your seat and flung at increasing speed down a track that feels like it could throw you at any second. It’s exciting. You find yourself at the end way too quickly.

The ending itself is a surprise and a risk, but, for me, totally satisfying. It leaves me realizing that I lost myself in the book, but once I was done, I couldn’t help meditating on this culture of toxic masculinity we’re living in. I feel like I learned something about what a woman has to navigate, about where she finds support and where there is none, and about the institutions that protect and nurture bad behavior by men. I feel a little more ready to have a conversation that’s deeper than two sides shouting at each other across a battlefield. –Sean Carswell (Midnight Ink)

I’m not sure a book like this would have existed before the internet. The idea of an expansive yet personal overview of new-to-the-reader scenes allegedly forms the basis for much of today’s expository scene writing—I use the word “allegedly” here because the imagined audience of such books often has at least a toe in whatever musical pool the writer discusses. In the case of the sprawling Japanese music ecosystem that Ian F. Martin discusses in Quit Your Band, though, the author knows that readers are unlikely to have much acquaintance with the groups and scenes he mentions, to say nothing of the intricacies of booking shows in Japan. This lack of acquaintance is one of the points he makes: the best way to immerse oneself in any new ’scape is to find a band and start chasing down tendrils: ex-members, aligned groups.

If this method sounds familiar, it might be a product of your age, dear reader: we used to do it like this (excuse me for a second while I yell at a cloud. Okay, I’m back now). I think a lot of aging punks who are detached from active music hives feel overwhelmed by the sheer number of options that are out there, and as such resort to the hackneyed assertion that there’s no good music being made— even though the number of options and avenues that have yielded the exact opposite of that assertion. Because the history of recorded music is available to everyone, it’s now easier than ever for microscenes to spring up. It takes a little more work to find them, but it’s work that’s fun. Or should be, anyway.

Ian F. Martin’s book is more than a book in this age of the internet: it’s easy to forget that all books are now hypertexts. Reading about the bands he discusses in a vacuum is one way to approach this book. It’s much more gratifying, though, to use it as a springboard for discovery. Martin carefully and lovingly details specific, sometimes tiny epochs of Japanese underground music, which are accessible with a little digging. And if you’re a “Back in the Day” kind of person, you’ll remember how immensely gratifying such archeological discoveries could be. If not, now’s a great time to start. –Michael T. Fournier (Awai Books, 1133 Broadway Suite 708, New York NY 10010)

Brian Jabas Smith is a recovering meth addict who played in a bunch of bands. He’s also a reporter for the Tucson Weekly. Tucson Salvage is a collection of his columns from that free weekly, focusing on residents of that city who don’t often get much time or coverage: a legless dialysis patient, the operator of a late night hot dog stand, a young woman paralyzed in an auto accident who then put herself through law school, dozens of others.

Smith’s writing in Tucson Salvage is a delicate balance of reporting and pathos, never going too far in either direction. He’s interested in his subjects, spends time with them, becomes involved in their lives—sometimes uncomfortably as his addiction threatens to rear up. He feels kinship with the underrepresented because of his own subterranean travels. As such, he never casts judgment, despite his affection for the subjects of these many standalone essays being at the fore. A few steps in a different direction and he might have been in the same spot.

Due to the confines of newspaper column work, economy is necessary, as is innovation: readers won’t return to repetition. His prose throughout is crisp, occasionally dazzling, and never self-congratulatory. Smith’s eye for defining details translates easily into description which catches personality and setting with a few deft words. Subjects as disparate as custom bike frame designers, long distance couples trucking, and rug weavers are instantly familiar once described.

One of the joys of being a book critic is the arrival of a completely unheralded release which delights. I have no idea how Tucson Salvage found its way to my door, but I’m glad it did. –Michael T. Fournier (Eyewear Publishing, eyewearpublishing.com)

Gitter’s hometown of Boston is certainly represented here. Scene gossip is a staple of each of the zine’s twenty issues, and interviews with the likes of SSD, DYS, Slapshot, and Gang Green, among others, are prominent. And I get that people outside of New England (hell, even people in it) might have Boston fatigue. With that said, Gitter’s coverage of bands extends beyond Beantown: his writing focuses on a diverse, awesome group of bands including the Misfits and Necros, Black Flag, Ignition and Dag Nasty, Swans, even early Metallica and Voivod. Gitter interviews bands that he likes, and his taste is spot-on. There are no clunkers here.