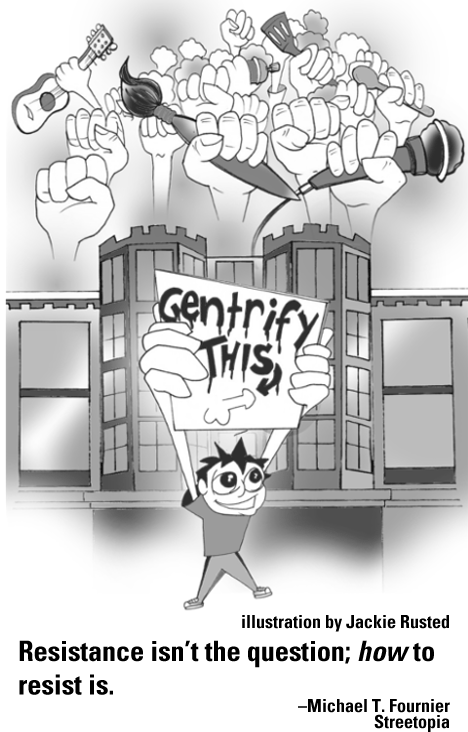 Dystopian lit and film are in vogue—stores and libraries are having a hard time keeping 1984 and Handmaid’s Tale on the shelves. But as Streetopia editor Erick Lyle notes, the flip side of the coin is the idea of utopia, which questions “when does the nonfunctional and intolerable status quo, endured for years, suddenly become an emergency that must be dealt with immediately at all costs?” In other words, when is enough enough and what can be done? Resistance isn’t the question; how to resist is. What works? What doesn’t? And what counts? Monitoring social feeds for petitions? Leaving your phone at home and masking up? Deleting an app from your phone? Making calls?

Think piece after think piece have clotted webpages and newspapers since the election, arguing efficacy and viability of all the above and then some. Perhaps the real solution can be seen in this anthology edited by Erick Lyle, the longtime editor of Scam zine (the new issue of which I’ve reviewed elsewhere herein).

Lyle was a longtime resident of Miami before moving to the Bay Area years back. Both towns suffered the same sort of gentrification (one that’s now spread to Las Vegas): in an effort to attract money, cookie-cutter “arts districts” with unaffordable rents that pushed communities out of longtime neighborhoods. In San Francisco, the Tenderloin was the focus of this redevelopment.

How best to resist this? Lyle and his vast cohort of artists, writers, musicians and community activists decided to show the value of the Tenderloin and its residents by starting a free street festival/art show in a local gallery showcasing their talent. It’s difficult to succinctly summarize the full ambition and drive involved in the anti-privatization, anti-gentry extravaganza that followed as anything less than inspirational: five full weeks of exhibits and showcases demonstrating the diverse talent and vision of the neighborhood’s residents.

I’m an ex-restaurant guy, so the chapter that resonated with me the most was with Sy Wagon, who for five weeks ran the Free Café, serving donated food to as many as ninety Tenderloin residents a day. Her section highlights the efforts of ordinary neighborhood people coming together to do something beneficial. After all, what’s more communal—more utopian—than a bunch of people eating meals together?

Much of Streetopia is a series of interviews with the festival’s principles. If this book has a weakness, it’s the occasional disjointedness of repetition, as different writers cover the same introductory points. This is easily overlooked, though, as they’re a diverse and talented group with a wide range of opinions and talents, the idea of utopia connecting them all. Artist Brontez Purnell, writer Rebecca Solnit, and musician Ivy Jeanne McLelland all make appearances.

The message of Streetopia is a powerful one: the best resistance is to harness and nurture community. In the dark days following the election, this book was (and is) soothing and deeply inspirational. –Michael T. Fournier (Booklyn, 37 Greenpoint Ave., 4th Fl., Brooklyn, NY 11222, booklyn.org)

Most of us have a dream about starting a small community of our own, away from scene politics and the well-beaten paths of a familiar place. This first-hand account from Chris Clavin tells the story of a very small group of determined people who attempt to build their own community from scratch.

Chris Clavin is probably best known for his involvement with Plan-It-X Records and a variety of folk-punk bands from central Indiana. In 2010, he convinced a few of his friends (and a few strangers) to move to Cairo, Ill. to create a punk utopia in a blighted, forgotten river town. He buys a huge, dilapidated building, which becomes their home. The ground floor is transformed into the Ace Of Cups, a coffee shop and ad-hoc community center. It seems too good to be true and as the name of the book will tell you, things pretty much go downhill from there.

In turns hilarious, strange, and heartbreaking, the account is organized by months and reads like a diary. The piece  follows explorations of what’s left of the town and encounters with the people who live there. The building has a mind of its own and nature is slowly reclaiming crumbling buildings left and right, but Clavin refrains from romanticizing Cairo’s urban decay. The punks and townies reach an uneasy peace, though they don’t seem to reach a true understanding of each other’s motives for being there.

Having lived in my share of shitty, small towns and run-down neighborhoods, I could relate to the routine problems of surviving in a place without a real grocery store or a laundromat, and the quiet frustration resulting from being deprived of social opportunities. In plain language, this book recounts the reality of ghost-town life and shows how capitalism has truly and irreparably failed middle America.

Despite the city’s curse and Clavin’s quixotic quest for punk paradise, this book reveals much about the power of hope and idealism and the harshness of reality when it comes to crash the party. –Cheyenne Neckmonster (Secret Sailor Press, PO Box 2312, Bloomington, IN 47402)

Hybrid Moments: A Literary Tribute to the Misfits
Edited by Sam Richard and MP Johnson, 170 pgs.

I love horror. I watch an average of two to three scary flicks a week, not to mention the amount of gleefully, gross fiction by Joe R. Lansdale, Brian Keene, and Richard Laymon that populate my library. For these reasons, the Misfits will always be one of my favorite bands (well, Danzig’s Misfits, not the Michale Graves/Jerry Only embarrassment). With songs like “Vampira,” “Astro Zombies,” “Halloween,” and the eponymous “Hybrid Moments,” Glenn Danzig—in all his meat-headed glory—has soundtracked my cherished nightmares.

In this short story anthology, editors Sam Richard and MP Johnson have corralled several writers to concoct gruesome tales inspired by the New Jersey progenitors of horror punk. More than a clever idea, this is downright brilliant! Publisher Weirdpunk Books has also released a collection of stories inspired by GG Allin, and I hope they keep it up.

As with any short story anthology, the results are eclectic. I went in expecting pulp in the vein of EC Comics and Creepy—short spine-chillers with twist endings—but the majority are grounded and lyrical narratives covering a reporter obsessed with a murderess, a woman compelled by skulls to kill, an antisocial television junky harboring a dark secret, and a fictionalization of Patty Hearst’s abduction by the Symbionese Liberation Army. For example, José Cruz’s “American Gods, American Monsters” and James Edward O’Brien’s “La Caja” are suggestive and altogether less splatterpunk, more atmospheric horror. T.A. Wardrope’s “The Soft Remains” reads like an unpublished tale from Clive Barker’s Books of Blood—visceral Lovecraftian terror soaked with arterial spray. Matthew Vaughn’s opener “Exterminate the Whole Human Race” is an inventive take on mindless flesh eaters, while Nicholaus Patnaude’s anti-narrative “Static Imago,” which reads like Burroughs mutated by Pynchon, is the most bizarro and divisive in the collection; its cut-up style is a definite mindfuck.

Sure, there is the occasional disembowelment and severed head, but such violence begat introspection. Nothing is cheap or illogical, a pitfall for many genre anthologies, and the stories are consistently entertaining throughout. I highly recommend this book for those who land in the horror/punk intersection of the Venn diagram, and for those who like a little yuck for their buck. –Sean Arenas (Weirdpunk Books, $15, freaktension.com)

If you’re anything like me, you’ve probably bought and re-bought several crucial books you’ve loaned out to friends. Please Kill Me is one that’s always made its way back to me, but is worse for the wear of passing through so many hands. I felt the urge to re-read it a few months back after Marc Maron interviewed authors Legs McNeil and Gillian McCain. The book remains a highly entertaining and disturbing read, crucial for any punk fan.

I almost missed Phil Marcade’s anecdotes amongst the tales of Iggy Pop, Wayne County, Debbie Harry, and the rest of the original crew. Marcade’s anecdote about meeting and summarily shooting up Nancy Spungen is a memorable one, but more because of Nancy than him. Similarly, Marcade’s band the Senders played with all the nascent scene’s heavy hitters but have none of the notoriety of their contemporaries—they’re not a canonical band despite having been there.

Punk Avenue is Phil Marcade’s recollection of his years in the scene for Three Rooms Press (which, in the interest of full disclosure, have released two novels I’ve written). The book starts in media res with his 1972 Arizona drug bust, stopping in Los Angeles and Provincetown before landing in the veritable Chelsea Hotel in 1974, as the New York Dolls play the Mercer Arts Center and the Ramones begin gigging at CBGB’s. Marcade’s stories are crisp and well told throughout, often hilarious and sometimes grisly. A perfect example is when the Senders, after playing the legendary Rat in Boston, are invited back to a woman’s apartment for salad when chaos explodes. Marcade creates real tension with his details and descriptions—one of the book’s more memorable anecdotes (of which there are no shortage).

On the one hand, Marcade’s narration reads like a punk rock version of Zelig, as he appears in anecdotes with all the era’s heavy hitters. His friendship with Johnny Thunders, in particular, is an ongoing thread throughout the book. Marcade renders his anecdotes like behind-the-scenes footage of the aforementioned Please Kill Me and all the other canonical punk history books, lending fresh perspective to well-trodden territory. On the downside, there’s an assumption that a reader is at least noddingly familiar with the principles—but if you’re reading this review, chances are you have that familiarity.

I don’t think this book would work as well as it does if it were just “I was there” stories. More important than the all-star cast is Marcade’s story, as he bungles a series of relationships, struggles to establish the Senders, gets a foothold, then succumbs to heroin addiction before finally getting clean and committing it all to paper. The scene gossip and the larger through line are well-balanced.

Punk Avenue is a fast, fun read that fills in historical gaps and establishes Phil Marcade as more than a character lurking in the shadows. Fans of CBGB and American punk will dig it. –Michael T. Fournier (Three Rooms Press, 561 Hudson St. #33, New York, NY 10014, threeroomspress.com)