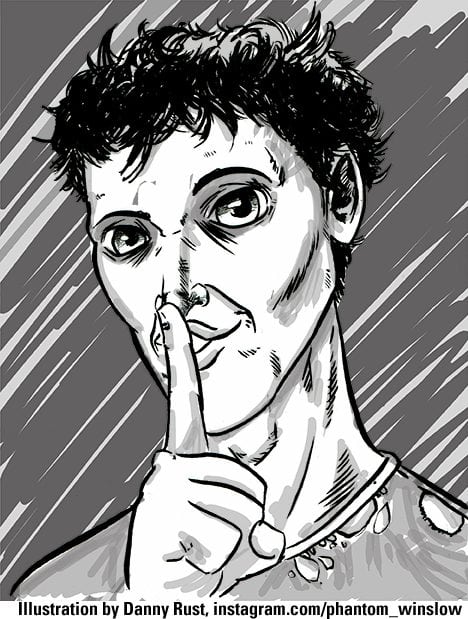 Featured Book Reviews from Razorcake Issue 96: Prodigal Rogerson, As You Were, Vol. 5, Let’s Go to Hell

While the lengthy subtitle for this very short book is delivered in tongue-in-cheek fashion, it’s a spot-on description of what the reader can expect. Delivered in a whimsical yet factually rigorous style, Bennett’s book seeks to answer the question, “Whatever happened to Roger Rogerson?”

The Circle Jerks first bass player saw his role decrease and then disappear after a drug overdose that landed him in the Red Blanket Room, which inspired the Circle Jerks song of the same name. But where did he come from and, more importantly, where did he go? What prompted his return to L.A. where he would fatally overdose under mysterious circumstances in 1996?

Bennett uncovers all kinds of fascinating information about Rogerson whose peculiar lingo was as strange as it was infectious. When I was working on Keith Morris’s book My Damage, the stories he told me about Roger sync up with what’s presented in The Prodigal Rogerson. Bennett, however, goes much deeper into Rogerson’s antics and chronicles his post Circle Jerks career, which included a stint in a band with Kristy McNichol’s brother.

Bennett also presents never-before-published information about Rogerson’s short and mysterious military career and the source of much rumor, innuendo, and speculation, much of it fueled by Rogerson.

A worthy footnote to an enigmatic career and a highly recommended read for both fans of the L.A. punk scene and Circle Jerks completists. –Jim Ruland (Microcosm Publishing, 2752 N Williams Ave., Portland, OR 97227)

Recently I was at a planetarium and the host asked the audience, “Who here wants to go to Mars?” A number of little kids yelled out, “Yay!” or “Me!” The host then asked, “Why might you want to go to Mars?” and I yelled out, “Because I hate my job!” Interestingly enough, even though I’ve always made decent money and had “professional” jobs most of my post-college life, I just dislike work. I am annoyed at being unable to do what I want when I want. I hate being told what to do, especially by inept managers.

That being said, the fifth volume of Mitch Clem’s series, As You Were was made for people like me. The theme is “This job sucks!” and it’s amazing the variety of tales that can come out of what might seem like a simple phrase. While most artists (Steve Thueson, Liz Boulduc, Steve Larder, etc.) take the common sense approach of bad jobs they’ve had, others (Jensine Eckwall, James the Stanton) go in directions where I’m not even sure what the hell they’re talking about. (Don’t worry. That’s not necessarily bad.)

The styles of these punk artists range from clean and pop-influenced to dark and serious. Their stories run the gamut, too. Some are funny and winsome, while others are sad and reflective. That’s wonderful, though, as it shows the wide range of feelings that various jobs can bring out. A significant portion of the pieces focus on the grind of service work—house cleaner, pizza maker, donut shop employee—and in almost every situation it shows the main character being at the beck and call of the public or the all-too-often useless managers.

One minor complaint: it would’ve been great if at the beginning of each comic the artist’s name would’ve appeared. On occasion it did, but too often I had to flip to the table of contents to see who the artist was. That aside, this is certainly worth checking out, especially if you’ve been ground down by insufferable jobs and managers, as I have. The wide range of stories, artists, and styles means there’s something in here for everyone. –Kurt Morris (Silver Sprocket, 1057 Valencia St. San Francisco, CA 94110)

I have been waiting for this book for a long time. Finally, the weird, untold legend of the Butthole Surfers will be known! Celebration in Weirdoville. It was the Butthole Surfers who first taught me that punk rock wasn’t just about uniform chords and how fast you could play. They were also my introduction to the microcosm of Texas punk which still obsesses me to this day. It all came about at my friend Glen’s house back in 1987 when he lent me his brother’s copy of Psychic… Powerless… Another Man’s Sac. It really changed my fourteen-year-old viewpoint.

From there I tracked down everything I could about these drugged-out Texans with their freak out live show—and their dog named Mark Farner—but the information was scant and stayed that way for decades. Now almost thirty years later, the story is being told.

The book is massive! Almost daunting, but once I got in, I found it easy to read with its narrative interspersed with quotes and stories from band members and those around them. Sadly, lead weirdo Gibby Haynes declined to be interviewed for the book, but the rest of the long cast of characters came out in droves and it still works. I know it would have been that much better with Gibby involved, but while reading I honestly didn’t notice it.

The book covers the early days of Texas punk rock, where weird was king, hitting the road on an endless tour that encompassed the ‘80s, somehow beating all odds by getting first on a major label, then having a Top 40 hit, then their fade away in light of label hi-jinks and lawsuits.

The book’s coverage of the band’s lawsuit with long-time indie label Touch And Go was particularly interesting. At the time, the band was universally lambasted by the punk rock/alternative community for suing their former label, painting them as money-hungry corporate rockers. In the book, we hear it from the band’s side, and it is safe to say that there was fault on both sides of the situation.

Perhaps the craziest part of the book is the discography. For a band that has never provided one shred of production information on any of their releases, the author has meticulously pieced together a comprehensive discography of who played what, on what recording, and what date each song premiered live. There is also a subsection of unreleased songs, demos, and live recordings. It is hard to imagine the work that would go into this for a band that had all of their information available, let alone the most legendarily-cagey-about-details band to walk the earth. Add in an abundance of great color and black and white photos from all eras, and I’d call this one of the most comprehensive band bios I have ever read. My only complaint is that you just gotta put the umlauts in Hüsker Dü. It’s just wrong otherwise. –Ty Stranglehold (Cheap Drugs Publishing, outskirtspress.com)

I’ve never been to Toronto. It’s way over on the other side of the country, and I have never had the opportunity to go. I have always been interested, and this book makes me want to go even more. The thing is, that this book encapsulates a time that has long gone. It was a fun time. It was my time. Even though I was the West Coast, it is clear through the photographs and stories in this book, that the punk rock scene in Toronto was a blast.

So many photos of so many shows! The bigger bands of the era interspersed with locals. There is an intimacy about it that brings back the memories of shows back then. It was a time when punk rock and hardcore were blurring into indie rock and alternative. Bands were touring like crazy and people were documenting it like never before. This book is a testament to the time and the city. Highly recommended. –Ty Stranglehold (Anvil Press, anvilpress.com)

This collection of comics by tattoo and comic artist Michael Sweater has me catching hints of Gary Larson’s The Far Side subversive cute animal absurdism, Matt Groening’s Life in Hell bone-dry deadpan, and bits of Bill Watterson’s Calvin and Hobbes pre-adult philosophical inquiry. Sweater manages to make his usual choice of four or so panels count with enough biting humor to catch one’s attention, but is also capable of experimenting a bit and expanding into a couple of succinct “multi-day” arcs when the urge moves him. Overall, a fun read for people who need some relatable weirdness in their lives. –Adrian Salas (Silver Sprocket, 1057 Valencia St., SF, CA 94110, Silversprocket.com)