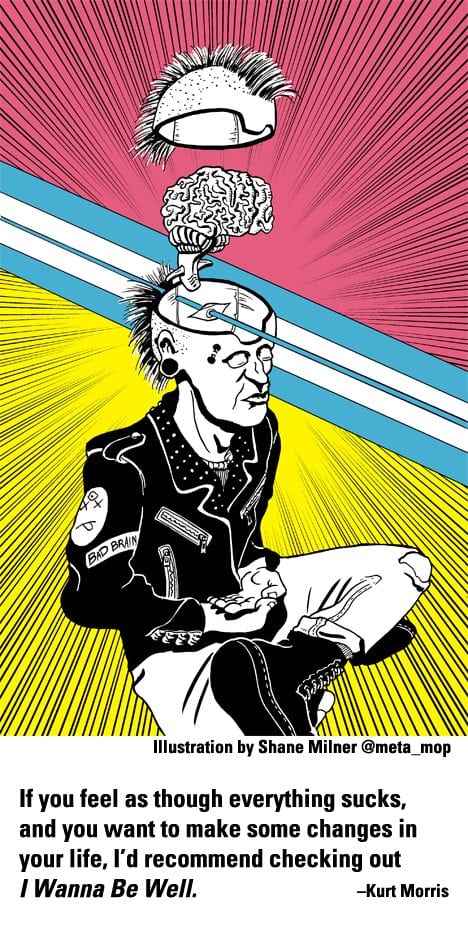 Featured book reviews from Razorcake issue 102: I Wanna Be Well, Brave Punk World, Everything You’ve Ever Done, Not My Small Diary

Featured book reviews from Razorcake issue 102: I Wanna Be Well, Brave Punk World, Everything You’ve Ever Done, Not My Small Diary

I Wanna Be Well: How a Punk Found Peace and You Can Too

By Miguel Chen with Rod Meade Sperry, 192 pgs.
Fifteen years ago, I would’ve thought it ridiculous someone from a pop punk band would write a book about meditation and yoga. How could someone from the punk world ever know enough about meditation and yoga to write a book about it? My understanding of the subject was very narrow. However, after decade and a half of using such practices myself, I’ve thrown off that view. In fact, it made me happy to read Miguel Chen’s book, I Wanna Be Well.

Chen, the bassist for Teenage Bottlerocket, writes (with the help of Rod Meade Sperry) a readable work about the basics of finding peace in one’s existence. The book begins with Chen sharing a brief account of his life story and how he became open to learning about meditation and Buddhism. This came about through a couple of instances, including receiving the book Dharma Punx by Noah Levine. As someone who has also read and benefited from that book about mixing punk and Buddhism, it seems a logical place for Chen to begin his journey.

I Wanna Be Well breaks down into twenty-six chapters, the majority of which follow a similar structure. Chen writes about an idea related to meditation or yoga. He then gives the reader something they can practice related to this idea. After that is a very short “tl; dr” (too long; didn’t read) that summarizes the practice in short detail. It makes reading each chapter very manageable.

The practices start simple: focusing on your breath. From there he moves on to walking meditation. He also covers many other subjects including the five remembrances of the Buddha, something I repeat to myself at least once a day. Chen writes in a very down-to-earth style that isn’t too religious and maintains a good deal of humor. He’s quick to acknowledge that some of his ideas may sound far-fetched, but he walks the reader through the concepts in an easy-to-understand manner.

If you feel as though everything sucks, and you want to make some changes in your life, I’d recommend checking out I Wanna Be Well. Meditation and yoga can do wonders in one’s life—they’ve changed me enough to respect someone from a pop punk band for the way he’s living his life and the work he’s done here. I’d highly recommend this for both beginners and old hands interested in meditation and seeking self-betterment. –Kurt Morris (Wisdom Publications, 199 Elm St., Somerville, MA 02144)


By James Greene, Jr., 426 pgs.
There is no way to write a book like this and not bite off more than one can chew. Author James Greene, Jr. admirably handles the challenge though. Brave Punk World is essentially a survey of punk and punk-adjacent music from around the parts of the world that aren’t the United States and the U.K. The book zips through thirty-eight countries in about 360 pages, so this succeeds as a primer rather than a comprehensive encyclopedia of all of the world’s punk. Think of it as George Hurchalla’s Going Underground but covering several million more square miles of scenes.

The general pattern emerges of identifying and focusing on a handful of bands from the genesis of each country’s punk scene and unspooling out a bit from there, generally staying within the 1970s and 1980s. As Greene explains in his intro, the arrival of the Sex Pistols and Never Mind the Bollocks proves to be a remarkably dependable metric for honing in on many countries’ punk ground zero. Bands like the Clash, the Stooges, and especially the Ramones also figure heavily in finding and inspiring international audiences. Sometimes the way culture mixes across borders leads to some interesting examples of lighting the punk spark. Raswann Zaza from more recent Syrian punk band M For Mazhott admitted he first came across punk in his country from the American Pie soundtrack. The book’s author also observes that Director Walter Hill’s 1979 movie The Warriors seemed to be as nearly as big an influence on Mexican punks as the music making its way into the country.

Not all countries’ punk histories are created equal. An overview of Sweden, Australia, or Canada’s late ‘70s and early ‘80s bands could easily take up a whole volume or two by themselves. The Philippines punk scene has a remarkably rich punk history to dig into due the albums and compilations put together and left behind by homegrown DIY label Twisted Red Cross. On the opposite end of the spectrum, the chapter on Nepal revolves almost entirely around Sareena Rai and her bands Rai Ko Ris and Tank Girl. Zambia has a fascinating chapter on the homegrown phenomenon of Zamrock. Zamrock actually predates punk rock, and is more like the Zambian analogue of Brazil’s Tropicalia, in which garage and psychedelic rock are fused to more traditional local music. (One of the more glaring oversights in this book to me is no real mention of Tropicalia in the section on Brazil.) There are some other coverage gaps that stick out to me in the book, but overall this is a very immersive and fascinating read. I highly recommend reading the book with Youtube or Spotify nearby to sample some of the hundreds of fascinating bands featured within. –Adrian Salas (Rowman & Littlefield, 4501 Forbes Boulevard, Suite 200, Lanham, MD 20706, rowman.com)

Everything You’ve Ever Done


By Amelia Marie Whalen, 306 pgs.
The umbrella of punk rock is big enough to accommodate wildly disparate ideas and interpretations. This is part of its charm. This book fits: shows and music are vitals threads in author Amelia Marie Whelan’s debut, but the punk ethos extends beyond these surface-level traits.

Whelan has an amazing relationship with her husband Dave Zagorski—they travel, they have adventures, they support each other’s endeavors. Dave plays music, records bands, and has a candle-making business. Amelia waits tables and camps and climbs.

After a point, the relationship goes sour as Dave gets mean and detaches. Amelia is perplexed by this turn, but she’s in love, and tries to give Dave the benefit of the doubt. Eventually, self-care prevails and she divorces him—only to find, later, that Dave’s brain has degenerated due to adrenoleukodystropy, also known as ALD. Whelan begins blogging her experiences, and their friends and family send Dave off with ‘the mother of all parties,’ a tribute to his life.

Everything You’ve Ever Done is harrowing. It has to be, by dint of its subject matter: a relationship dissolves, a loved one degenerates and dies. Whalen is frank in her discussion: it sucks, it hurts. She’s deft with detail, both heartbreaking and hilarious. As Dave degenerates, he loses first his ability to speak, communicating largely through a series of pterodactyl-like shrieks, making the occasional spoken sentence taking on additional resonance. Inhibitions are lost, too, yielding uncomfortable, unclothed situations (no spoilers here). By juxtaposing pain and hilarity, Whelan’s narrative adds resonance.

This isn’t the sort of book I would have read on my own—I’m usually turned off by discussions of spirituality, which are touchstones for both the process of Dave dying and Whelan trying to heal. But the subject here is discussed with disarming honesty, grounded not so much in orthodoxy as it is organic practicality, a love and connection of the outdoors, and a sense of a larger connection. I admit that the dragonfly on the cover was an initial turnoff, and that the book’s introductory passage seemed to nod towards a bumpy ride prose-wise, with its repetitions and needless words. But, once I got through the intro, the prose became much smoother, as if the initial passage was written earlier than the rest of the book—a sample chapter, maybe?

At any rate, I should have known better. Punk rock is all about not judging books by covers, and there I was forgetting the cardinal rule. Ultimately, Everything You’ve Ever Done pulled me into its rollercoaster trajectory. It’s a tale of loss and redemption, one that should be of interest to advocates of mental health, of healing, and of doing it yourself. –Michael T. Fournier (Ambos Books, everythingyouveeverdone.com)

Not My Small Diary #19: Unexplained Events

Edited by Delaine Derry Green, 104 pgs.
This is an anthology of comics about mysterious occurrences and otherworldly encounters—unexplained events, one might say. Forty-three artists illustrate their real-life experiences with the supernatural or simply inexplicable, including ghostly run-ins, cryptid sightings, and crossings into the dreamworld. There’s a little of everything in this anthology, really. Some comics are just a frame or two depicting a peculiar moment, a memory just a little too unsettling to shrug off completely, while others are multi-page miniature ghost stories. The artists themselves are clearly divided between skeptics and true believers, with pieces ranging in tone from cute and goofy to dead fucking serious. A few images are genuinely horrifying (all I’m going to say is “masturbating kobold in the crawlspace”). Definitely a cool way to check out the work of a whole lot of modern comic artists, and maybe a way to research the possibilities of realities beyond our comprehension, depending on your personal beliefs. –Indiana Laub (Self-published, mysmallwebpage.com)