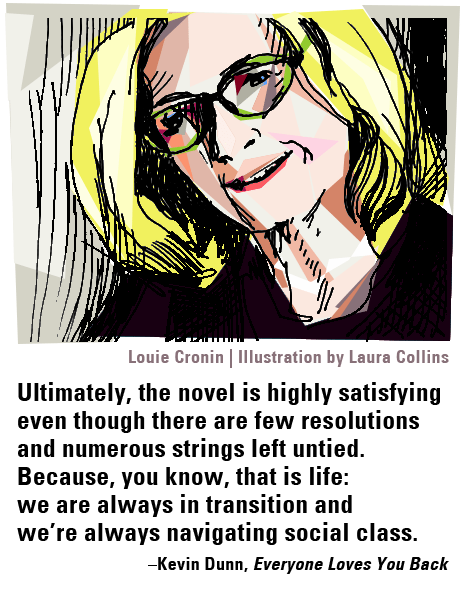 Featured Book Review from Razorcake #99: Everyone Loves You Back

Everyone Loves You Back
By Louie Cronin, 253 pgs.

Here is the backstory, as I understand it, to this highly satisfying novel: Sean Carswell, co-founder of Razorcake and Gorsky Press, taught a college course focused on producing a novel. The class solicited and reviewed manuscripts, chose one, and saw it through the entire production process until publication. One of the manuscripts was submitted by Louie Cronin, who has worked for years on NPR’s beloved “Car Talk” radio show. This submission was ultimately selected because one student cajoled her classmates to give the manuscript a read, eventually winning over the entire class. This backstory is not important for appreciating the novel, but I think it is important for reasons I’ll get to.

Everyone Loves You Back follows Bob, a radio technician working the late night jazz show on a Boston radio station. There are also a number of charming and well-developed secondary characters, such as Riff, the hippie/jazz aficionado and radio host; Irene, a co-worker whose affections Bob tries to balance with his own desires for Leonie, a Harvard dance professor in his Cambridge neighborhood; plus, a rich collection of other quirky neighbors and co-workers that Bob has to navigate. There is also an army of aggressive squirrels, encouraged by one of Bob’s loopier neighbors, and various trees that figure into the novel’s narrative arc.

On one level, the novel is about transitions and the ways in which we all work to navigate changing terrains. The radio station is under new management and the jazz show is on the chopping block, so Bob and his co-workers (new and old) must work to juggle principles, paychecks, and priorities. Meanwhile, in his rapidly changing neighborhood, Bob lives in the house he grew up in, surrounded by Harvard professors and well-heeled upper-middle class eccentrics all trying to simultaneously preserve and promote what they think the neighborhood is and should be. The novel pivots between these two backdrops, combining subtle humor (the narrative thread about an elaborate health insurance scam is wonderful) and sharp insights.

On another level, the novel is about social class. Those transitions in the radio station and neighborhood are ultimately informed by class dynamics. This is most clearly illustrated in Bob’s dilemma between dating Irene or pursuing the more polished (read: bourgeois) Leonie, which would entail Bob’s moving up in the class hierarchy. For me, it is Cronin’s portrayal of these class tensions and disconnects that really animates the novel. Cronin clearly has her working class sympathies, but she is never heavy-handed in her descriptions nor does she fall back on simplistic narrative devices (e.g., “know your place” or “working stiff wins the princess”).

About halfway through the novel, I started feeling a sense of dread, anticipating all the clichéd ways in which things could go off the rails for Bob. But I realized that Cronin respects her readers, assuming them to be intelligent enough not to need tired plot twists nor spoon-feeding shallow social commentary. The prose bounces and flows with an elegant pleasure that is impressive for a first novel. Ultimately, the novel is highly satisfying even though there are few resolutions and numerous strings left untied. Because, you know, that is life: we are always in transition and we’re always navigating social class.

And here is the thing: I don’t believe this novel would have ever been published by a large or even medium-sized commercial press. No one dies, commits adultery, is raped, suffers a mental breakdown, uses magic, fights monsters, or any other device that publishing companies find marketable today. Writing this review underscored for me how uneventful the story arc seems at first pass, but damn it, this novel works incredibly well. It is one of those novels that will linger with you for a long time, that you’ll encourage your friends to read, that you’ll gift at the holidays. It needs reading to appreciate, and kudos to that one student in Carswell’s class who took the chance and championed this gem all the way through the production process. –Kevin Dunn (Gorsky Press, PO Box 12024, LA, CA, 90042)

Many, many more independent book reviews are printed in a handy-dandy zine that you can subscribe to at a reasonable price, delivered to your door. Click the link below.