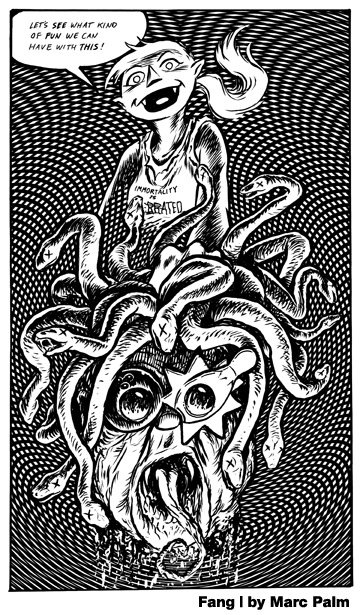 This is the second pocket-sized graphic novel by Marc Palm starring Fang, a monster hunter who also happens to be a vampire. It starts with her getting bit by a snake that sends her on a psychedelic trip. This was possibly a calling card from Medusa, which sets her on a mission of intrigue and assassination to find out what Medusa wants. Throughout the book, Fang meets up with stoned witches, Medusa (duh), and a whole lot of molted, living skin. It’s not a heavy read. You can pick it up and be done in seven minutes. But that seven minutes is chock full of corpses and grotesque monsters.

The presentation is great. A lot of the characters are drawn life-like with Muppet-esque features. Fang looks like her skin could be made of purple felt and one of the stoned-ass witches looks right out of Fraggle Rock. Palm goes for a very pulp aesthetic for the book and he has a very 1960s Mad Magazine style. One might mistake it for a very old comic until they see Fang holding a smartphone. Many of the full-page panels are awe-inspiring.