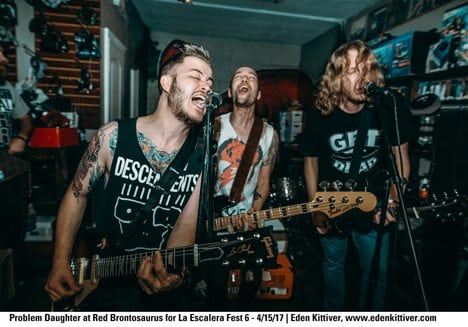 For the past six years, La Escalera Records has been helping their friends in any way they can, and in doing so, created a family of like-minded individuals along the West Coast and further. Since then, their birthday party has turned into such an event, music lovers from around the country travel to San Diego, Calif. for some good times and some good bands.

It must’ve been fate that Problem Daughter was playing the one show I was able to attend that weekend. The Red Brontosaurus is a pretty small record store, not necessarily the place you’d expect to see a full, four-piece pop punk band performing. The band hardly had enough room to stand and the crowd area was obstructed by shelves of records, but that didn’t keep anyone from dancing! Surprisingly, it ended up being the perfect environment to see Problem Daughter for the first time.

Shoulder to shoulder, the guys took the stage and they crushed it. I can’t think of another way to express how fantastic this band is. Their lyrics are emo enough for me to relate to, but their music is far from depressing—which is the main reason I rarely listen to the emo-punk jams that will forever have my heart. Even after the excitement of being at a show wore off, I couldn’t help but dance when I put on that first track, “O Bother, Where Art Thou?” This band had a great direction for their music to go and it’s executed brilliantly.

A couple weeks after the fest, La Escalera announced they will be re-releasing Problem Daughter’s 2016 album, Fits of Disorganized Boredom, on vinyl and I pre-ordered it without hesitation. I already can’t wait to wear my Problem Daughter shirt and spin my Problem Daughter record and talk about them constantly like the weird girl in middle school who annoyed the whole class. It’s still pretty early, but I think it’s safe to say I might have a new favorite band.