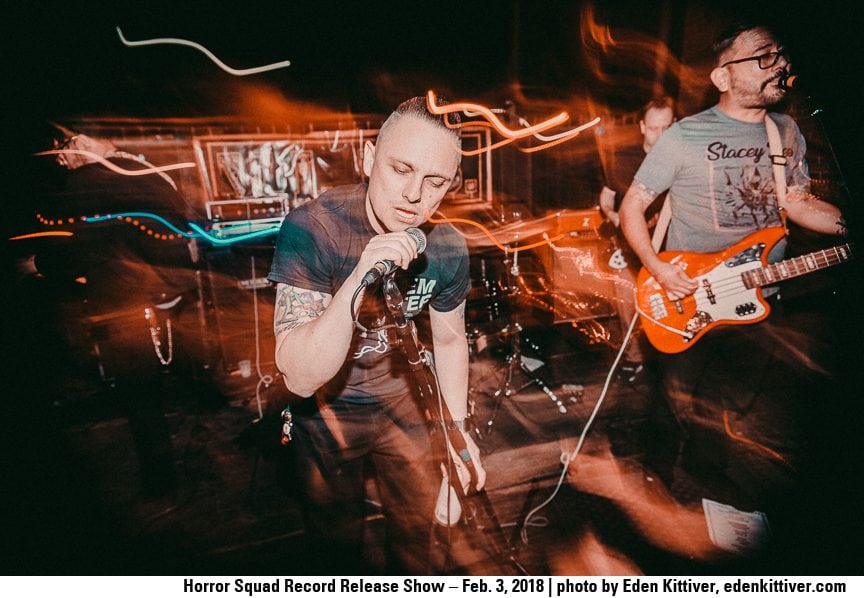 After Pomona’s favorite DIY space, VLHS, closed down last year, people stopped coming out to shows as much. But when word got out that VLHS house band Horror Squad was releasing a brand new album, everyone came out! I had never seen the back patio at Characters so packed! The space was so heavily concentrated with old friends, nostalgia, and overall positive vibes. I was reunited with the friendly faces that once made me feel so at home in a new scene.

When we got to the venue, we noticed that very special “VLHS” banner hanging behind the drum kit and it felt right. Tracy Soto started off the night, followed by DFMK, Secondaries, Turkish Techno, and finally, Horror Squad. Everyone stayed well past 1AM, just drinking beer, reminiscing, and catching up with one another.

I was incredibly honored to be asked to document this show. It’s so special to feel like a part of something in this scene. To me, the show represented old times, but also new beginnings, and an overall feeling that the world isn’t as bad as we think it is.

Horror Squad’s new release, Death Posi, was recorded and released independently and is available digitally and on vinyl on their bandcamp. Support DIY punk and everyone’s favorite five-piece by picking up a copy of your own!