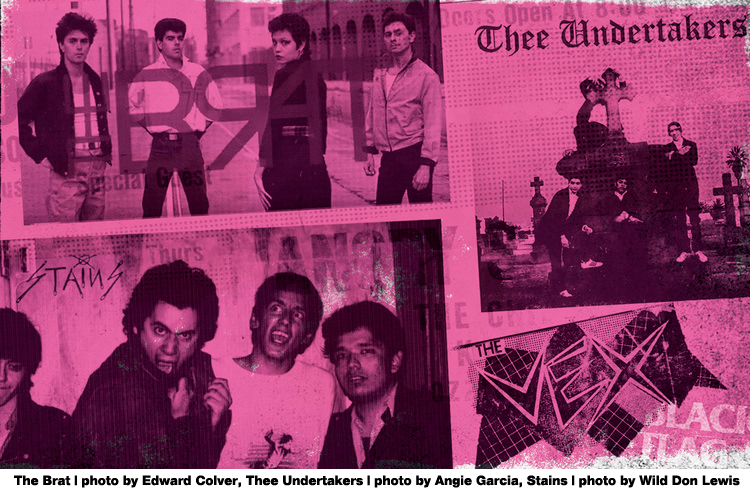 In partnership with USC Visions and Voices, Razorcake is proud to co-sponsor a virtual panel discussion on the first three installments of its Eastside Punks mini-documentaries about Eastside L.A. punk bands. Excerpts will be screened, followed by alive conversation featuring Razorcake familia and Eastside Punks director Jimmy Alvarado and musicians Tracy “Skull” Garcia (Thee Undertakers), Teresa Covarrubias (The Brat), and Jack Rivera (Stains)—who played storied L.A. punk venues such as The Vex and the Hong Kong Café alongside influential bands such as The Plugz, X, and Black Flag. The conversation will be moderated by Dino Everett, archivist for Eastside Punks and the USC School of Cinematic Arts.

Eastside Punks is a film series about Los Angeles’s other punk scene, one whose existence has developed parallel to, and occasionally intersected with, but remains largely marginalized from L.A.’s greater musical underground. Blending live footage and interviews with multiple generations of musicians, artists, writers, and scenesters, Eastside Punks taps into stories from the scene’s history: from its beginnings in East L.A.’s art and music underground of the 1970s to the rise and fall of its premier club, The Vex, and the bands that called it home; how its 1980s rebirth as a wholly underground scene based in backyards and advertised on flyers and traded cassette tapes led to the celebrated Chicano Groove music scene of the late 1990s; and how it remains a vibrant subculture where Chicano rasquachismo meets punk DIY to create one of the few remaining corners of punk’s true underground.