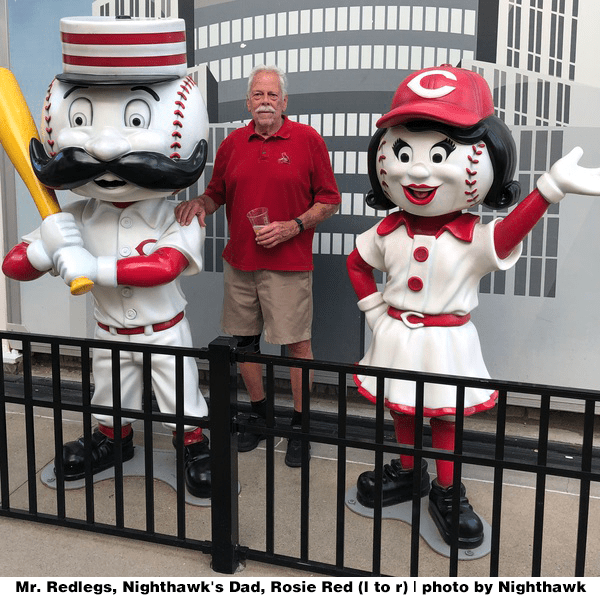 Maybe ten years ago or so, I had the idea for my Dad and me to watch the Cardinals play the Cubs at Wrigley Field in Chicago. I don’t think my Dad had been there before, which I’ve always found surprising. It’s only a five hour drive from St. Louis, where he’s from and has always lived, except for his time in the Navy, which was mainly spent in Vietnam. It was fun to take him to a game out of town. A few years later, we went to Milwaukee. The Brewers were playing host to, you guessed it, the Cardinals. That was a fun weekend. We did some brewery sightseeing, went to a few bars, and so on. At that point, we had seen our team play in two of the four cities that make up the National League Central Division, along with St. Louis. The other two are Cincinnati and Pittsburgh. I eventually started thinking we needed to see the Cardinals play the Reds and the Pirates, in their home ballparks. Cincinnati isn’t very far from home, but Pittsburgh is. The Cardinals sometimes go to those cities on the same road trip, but we never ended up doing that.

In the last few years, I thought about taking my Dad to Washington, D.C. to see the Vietnam Veterans Memorial. There is also a baseball team there, the Nationals. When I mentioned this to him, he told me he’d been to D.C. years ago for work but didn’t visit the wall. The Cardinals were playing there the last weekend in July, of this past season. Cincinnati was also at home a few days before, as was Pittsburgh a few days after. It was a combination present for Father’s Day and his birthday, which is in October. It was also going to be a lot more than what I usually spend on those two gifts, but I was financially prepared. With some coaxing from my Mom (She’s less worrisome than he is. I’m somewhere in between.), he agreed to go. She helped with booking hotels, using their AARP discount. The same was done in Milwaukee years ago. When I’m traveling by myself or with friends, camping or sleeping on friends’ couches and floors is fine by me. But like I told several people, this wasn’t that kind of trip. In addition, we weren’t gonna be hanging at bars late either. I don’t need to go to Washington, D.C. with my Dad for that kind of action.

We left in their car (newer, cleaner, nicer, and less miles than mine) on the morning of Friday, July 29. Next stop, the Queen City! I did the majority of the driving on the trip, but hey, I’m a professional and he’s retired. We didn’t really do anything of note along the way. I will say that I drove us to the wrong hotel, if you believe that. And you should. It was in the same giant parking lotas the one we had a reservation at. I turned off the directions on my phone as I was pulling off the street, and only noticed one hotel. That’s how that happened. The lady at the front desk broke the news to us that we didn’t have a reservation there. My bad.

Once at the correct hotel, we chilled in our room for a bit. We then drove to the ballpark. Both the Reds and the Orioles, the team they were playing, suck. We bought cheap tickets at the window, but sat at field level. It wasn’t real crowded. A big difference between the two of us is that my Dad talks to just about everybody he can. I, in contrast, pretty much don’t talk to anyone I don’t know. I already know enough people. So of course, he was hobnobbing with ushers and staff at the game. I believe that if you’re sitting in more expensive seats than those you paid for, it’s best to avoid ushers. Although, older people get away with more things than younger people do. It’s a fact! Kids in the Hall reference?

I did keep overhearing him while we were on this adventure say, “My son and I are on a baseball trip.” He seemed to be very proud of me, which is cool. My Dad got some kind of certificate for his first Reds game. He also got his picture taken with Mr. Redlegs and Rosie Red, the team’s mascots, by me. I ate a SkyRosa, for I believe the first time. My boys in The Dopamines and Razorcake’s own Nick Toerner hipped me to that one. It’s a Skyline Cheese Coney on top of a slice of LaRosa’s pizza. The end result is a Cincinnati delicacy. My Dad did not have one.

The game wasn’t very memorable, probably because I wasn’t paying much attention. My research shows that the visitors won, 6-2. We drank some local beers, as we did everywhere on the trip. I’m sure we had Hudy at some point. There was a little dustup on the diamond near the end of the game and it was fireworks night, so things were exciting after all! Outside the park, we walked around a little and looked at some statues before heading back to the hotel. Vacation had a show that night, but it wasn’t in the cards for Dad and lad.

In the morning, we ate at Frisch’s Big Boy. It’s sort of a local chain, similar to Denny’s. Our destination that day was Bethesda, Md. We had about five hundred miles in front of us. Along the way, we stopped at a Sheetz in Triadelphia, W.Va. If you’re unfamiliar, it’s like a Casey’s, or any other gas station that has hot food. It’s pretty sweet. I bought a souvenir coffee cup and a pepperoni roll. The bread was also stuffed with hot pepper cheese. The coal miner’s lunch wasn’t that bad. Shortly after, we pulled off the road to take a good look at the Appalachian Mountains, which we were driving through. It’s really beautiful landscape. By 8 PM or so, we were at our hotel just outside of D.C. The liquor store across the street had National Bohemian beer, which was first brewed in nearby Baltimore in 1885. I walked to a Mexican restaurant and picked up dinner. The rest of the night was spent relaxing in our room.

The next morning, we drove into Washington for the Cardinals game against the Nationals. This day was kind of the focal point of the trip. I bought us seats a few rows off the field, just down the third base line from the visitors dugout. My friend Matt - who’s an old friend from St. Louis and now lives in Baltimore - and his family already had seats in the same section. I bought a scorecard and a pencil, thinking that would be fun. After a few innings, I gave up. The Cardinals won 5-0. After the game, I drove us around to look at the usual tourist stuff. It rained the rest of the day. After asking my Dad if he wanted to, we got out to visit the Vietnam wall. He found the name of a friend in one of the directories at the memorial. A while later, we made our way back to the hotel for pizza from a place around the corner and some more cold ones.

The weather the following day was just beautiful, warm and sunny. Great for more driving around and looking at shit. I was very happy to check out Dischord House in Virginia and get my picture taken in front of it. We also saw the house and stairs from The Exorcist. Very cool stuff. For lunch, we went to Ben’s Chili Bowl. Matt recommended it. The place has been there since 1958. Ben’s widow, Virginia, was even in the house! She was kind enough to take a couple pictures with us. I got the Original Chili Half-Smoke, fries, and a shake. And a T-shirt. The half-smoke is a sausage delicacy in D.C.: half pork, half beef, and smoked.

Next up was the National Postal Museum. My Dad was a letter carrier for a short time when he was younger and I considered that line of work at one point, so we thought it would be fun. The museum is located in an old post office building, which was in operation for most of the twentieth century. Oddly enough, there was a baseball exhibit. How fitting. The museum was pretty interesting, as most are. Ha. After some more looking around town, we were back in our room. We kicked our feet up as I looked for a seafood restaurant in the vicinity. You know, last night on the East Coast. A fairly small, not at all fancy crab house was where we went. Crab cake sandwiches and corn on the cob was what the Midwesterners went with. It was a delicious way to end our time in the nation’s capital.

Tuesday morning, we drove to Pittsburgh. Yinzertown was our last stop. We dropped our things at the hotel for the night, and headed into the city to do some sightseeing before the ballgame. From Mount Washington, we had a nice view of the downtown area which is on the other side of the Monongahela River. The Incline of the same name was under construction, but I rode the Duquesne one. My Dad is afraid of heights, so he stayed behind. It is a funicular, which is a type of cable railway system. It takes people up and down a steep hill, and was completed in 1877. I had a good time on my ride.

After that, we got some nosh at the original Primanti Bros. in the Strip District. The Primantis started slinging their sammies in 1933. Along with some Iron City beers, we both had the Pitts-burger. It’s their #2 Best Seller. #1 is Iron City. Ha. Ha. Ha. The sandwiches have fries on them and are served on thick slices of Italian bread.

From there, we went to scope out a portion of the outfield wall from Forbes Field, which was the home of the Pirates from 1909 to 1970. The wall is still at its original location, right next to the University of Pittsburgh. Next up for us was the game. The Pirates suck, so we once again bought tickets at the window. My Dad also got us a discount for being a veteran. We saw the Great Pierogi Race, drank some Big Irons, and the home team actually beat the Brewers. That was good for the Cardinals. I was gonna eat some pierogies, but the options weren’t great. After the game, it was back to our room. We were to be homeward bound in the morning.

The last day of our trip brought us about six hundred miles of driving. Yay! The only thing we did on our way home was stop at Hoosier Gym, which was awesome. We are both basketball fans and my Dad played in high school and college. He was even the coach of my grade school team. Located in Knightstown, Ind. the gym was a filming location for Hoosiers. It was built in 1921, and the movie was filmed in 1985. We shot a few hoops and even went to the basement and saw the locker room! Very cool. About four hours later, we were back home.

I really enjoyed the time with my Dad. Hopefully he has many more years left, but it’s obviously uncertain. I need to think about that more. That goes for everyone. Cherish your relationships and take advantage of the present. Maybe I’ll go on another similar trip with him. Maybe I’ll take my Mom on one. Maybe not. Regardless, I need to spend more time with both of them.