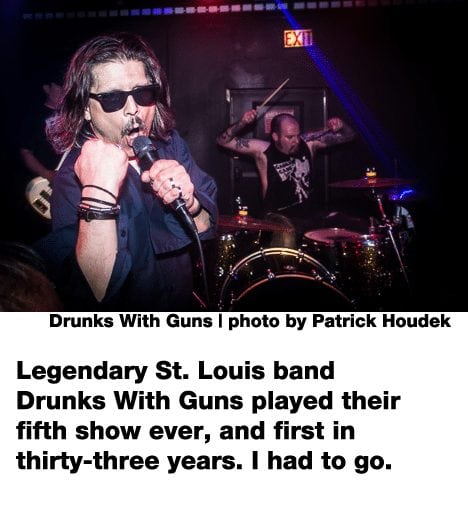 In June 1984, Drunks With Guns played their first show. I was there, also playing on the bill along with another local St. Louis band. It was in the basement of New Values. It was hot and humid and when DWG played, it was dark except for the one red light bulb that Mike Doskocil brought with him. DWG would play three more shows after that, opening for 45 Grave and The Vandals in September, Samhain and Verbal Abuse in November, and then finally their last show was opening for Battalion Of Saints in June of 1985.

After that last show—or maybe it was before (that would take research and it is easier to go by my mostly good but admittedly fading memory)—there was a 7” with the photo from the basement of Hell House. I don’t remember the address of that house, but it was on Shenandoah just west of Grand on the north side of the street. Then in 1987 Mike and Stan were in the studio working on a new DWG record but that ended up in a brawl between the two of them and the split stayed permanent. Each of them put out their own version of DWG records. Then later, there was the article in Forced Exposure written by Suzy Rust. She was from STL but living in Boston at the time, if I remember right. My guess is that article, along with the already-growing reputation about the 7”, put them on the map. I know I was hit up with questions about them often when Ultraman toured Europe. I saw their records everywhere available for crazy high prices.

DWG would pop up here and there—stories about bands wanting to cover their songs or take them on tour—none of which happened. But they did get a song into a Ben Stiller movie, which until very recently I didn’t know had been re-recorded by Mike for the movie. And that was pretty much it until now. I started getting messages from Mike late in 2017 asking about where DWG might play a show in Chicago. I suggested Empty Bottle first but then realized they probably wouldn’t be down with it since DWG would likely cause that crowd to wet themselves.

Mike had assembled a band with a guitar player from Indianapolis and the last bass player, Jim Broyles, still in St. Louis. Over the next few months I got messages detailing the travails of trying to get the practices together with Mike driving from Columbus and Jim from St. Louis to Indianapolis, only to have the guitar player flake or some other unforeseen problem arising with scheduling at the last minute. The likelihood of the whole thing getting off the ground seemed near zero at best.

Then inexplicably Mike said they had a date for the show at Liars Club in Chicago for May 5th. Even with that Mike had even more trouble and had to find a new guitar player, more messages about how badly that was going followed. But finally two weeks out from the date it somehow came together, had two guitar players and a drummer although not all five of them had been at the same rehearsal at the same time. In the final two weeks there was a set list, T-shirts, stickers and patches. I still had my doubts it would happen though based on how things had suddenly taken a dark turn in the last few months.

On May 5, I drove up to Chicago still expecting a message from Mike that he had bailed on the whole thing. But it never came. I made it to Liars Club around 9:30 to find the first band on stage—well, two guys playing what I guess was a punk rock version of jazz fusion. I’m not smart enough to get that kind of “art.” The room was packed but I didn’t see Mike and I didn’t see any DWG merch. I thought, surely Mike would have told me if they didn’t make it.

I sent Mike a message and he replied he was trying to take a nap in the backseat of a car. To be honest I thought there was still a chance he would just start up the car and leave. I decided that standing outside was better than the opening band, and not long afterward Mike walked up super agitated saying he had lost his phone again. He couldn’t find Jim either. Mike was hoping Jim had accidently picked up his phone. I would have asked him how he sent me a message if he didn’t have his phone twenty minutes ago, but he was in full rant mode so I didn’t see the point.

This whole scene reminded me of the last DWG show. Mike had appeared at the venue for load-in, more than drunk ranting at me about how he had lost his leather jacket (it was June, by the way). He then had me looking for it all over the club. We didn’t find it, but it did get tossed up on to the stage as they played. It’s been thirty-three years now. I still have no idea who had it or why.

Anyway, after tearing through the car Mike found his phone and wisely brought in the merch that I mentioned he should set up before they play, not afterward. While Mike set up the merch, I checked out Hotlips Messiah. They were pretty good—nice, ripping punk rock. The best part of the set was that one of their songs was a reference to one of my favorite Twilight Zone episodes, “Number 12 Looks Just like You.”

After they were done, I went back outside to hear more stories from Mike about how the guitar players had decided, without warning, to tune down some of the songs and told him he “just didn’t understand” the songs. There is no way I can relate here how entertaining that story was, only a video could do it justice.

After that, suddenly, it was time for them to play, Mike rushed up to the stage and they ripped into the set. After all the turmoil and multiple false starts after the first song, it was obvious they had pulled it off. Mike was on it from the get-go, Jim was totally throwing down the groove that Mike wanted, and—as far as I could tell—both guitar players and the drummer nailed it. From what I understand, people in the crowd had come from as far away as California and I think they got the set they deserved. The people up front were totally into it. The people in the back of the room—I don’t know for certain if they fully grasped what was happening or how totally insane it was that it was happening thirty-three years later—show number five for Drunks With Guns. Mike in any other band is in the back, playing drums and killing it, but with DWG he gets to be front and center being Mike and that’s as entertaining as it gets.

After the set, the line formed and the T-shirts, stickers, and patches were flying out of his hand. I hung out a bit then realized it was nearly 1 AM and I had to bail. Mike told me that show was it. The other guys had decided not to play any more shows, but later he told me that it went so well that they changed their minds. Now, a tour is booked in July and they will be playing the AmRep show in Minneapolis, and before that a show with the Dead Boys in late June. I can’t say I ever saw this coming—that Mike would even consider doing this isn’t something I would have considered—but here we are in 2018 and Drunks With Guns are touring and recording again.

The future is really weird.