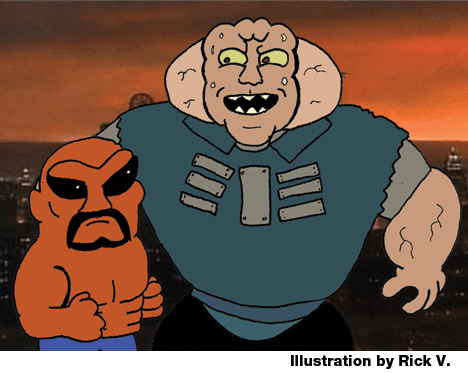 In the 1987 video game, the gamer plays as Billy or Jimmy Lee, who fights through the streets to save their mutual love interest, Marian. In the 1994 film, Billy Lee (Scott Wolf, Party of Five) and Jimmy Lee (Mark Dacascos, John Wick 3) are two wise crackin’ martial arts students who live in the near distant future where an earthquake has turned Los Angeles into a crumbling wasteland. The police are on call only during the day while the gangs run amok at night.  A white gang overlord who calls himself Koga Shuko (Robert Patrick, Terminator 2) has stolen one half of the titular Double Dragon medallion and now has the ability to turn into a shadow and possess innocents. The Lee brothers and their mentor Satori (Julia Nickson) are in possession of the other half of the medallion.

Koga Shuko sends the many colorful gangs of “New Angeles” after our heroes.  On the flipside, there is a gang of teenaged good-doers lead by Marian (Alyssa Milano, Charmed) who call themselves the Power Core. They make it their mission to pick up the police department’s slack. The Lees team up with Marion to take down Koga Shuko and steal his half of the Double Dragon pendant.

The almost literal elephant in the room is the oversized muscular baddy Abobo who is also featured in the video games. In the movie, he gets mutated into an even more oversized and muscular thing whose head looks like a sack of potatoes. He looks extremely ridiculous and develops body image issues and flatulence.

The filmmakers tried to make an action/fantasy/martial arts/post-apocalyptic movie to appeal to everyone. History would show that it didn’t appeal to anybody. Nobody saw it due to limited releasing and critics hating it. Rightfully so, it’s a pretty bad movie. But the kind of bad movie you watch in its entirety and then invite your friends over to watch it again the next day. You won’t care about the plot as much as you just like looking at regular Cleveland doubling as a destroyed Los Angeles. You’ll be distracted from the phoned-in acting by a seven-foot-tall undead mutant wearing a basketball jersey. The lack of actual martial arts will go unnoticed when you see Robert Patrick turn into two samurai sword-wielding goblins. It’s pure culty goodness/badness.

The print they used for the movie is very nice for those who like that kind of aesthetic. The special features on this release feature interviews with the screenwriters who explain why a small studio (Imperial Pictures) had to make a Double Dragon movie as quickly as they could before they lost the rights. Scott Wolf and Mark Dacascos are interviewed and are mostly embarrassed by their performance—and not so much the movie. And for the die-hards, there is a pilot for the extremely terrible Double Dragon animated show. –Rick V. (MVD, mvdb2b.com)