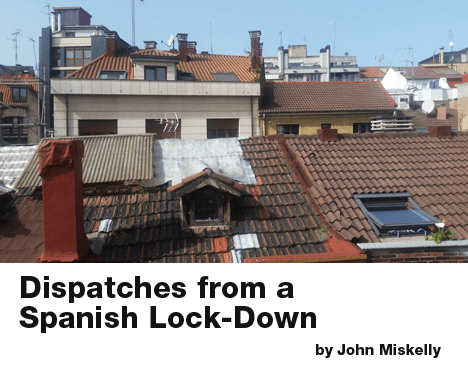 Dispatches from a Spanish Lock-Down by John Miskelly

In hindsight, the exponential slow creep of infections both here in Spain and across Europe over the last couple of months should have been warning. And yet even two days after schools were officially closed it still felt incredibly sudden: on Friday everything was normal albeit with a fug of worry hanging over many a conversation, by Sunday night we were confined to our houses by emergency law, only allowed onto the streets to work certain jobs, visit supermarkets, pharmacies, and doctors, and walk dogs. The sheer gravity of the decision—Martial law in a western liberal democracy like Spain—planted a leaden dread in my gut that hasn’t ever gone away. There will be no more dilly-daddling around with mere “advice” and “guidelines.” We are beyond that.

There are cops on the street. You can be fined a significant amount just for being out and about without reason. The street below my apartment—filled with bars and normally choked with people and bustle and noise from Thursday lunchtime until Sunday night—has been deserted since Saturday night. The beach and the promenade—the pride of the town and the center of everything in Gijón (Xixón in Asturiano)—was deserted on Sunday. The webcam I usually use to check the swell is now just a measure of the extent to which this lock-down has changed this seaside city. No walkers, no joggers, no cyclists, no buskers, no tourists taking selfies of themselves in front of the North Atlantic, no surf instructors walking to the water with a line of beginners trailing behind them, no one in the water—no one in the water! I wonder if I’ve ever seen that even on the worst days. Anywhere else this would be weird. But Spaniards live outside. Ever wondered why so many Spaniards tend not to have indoor voices? It’s because they don’t stay in. Even here in the mountainous north with its much milder, wetter, and more Northern European climate people are out. Now a population of forty-odd million used to congregating in large groups on terraces and chatting and eating and drinking away whole afternoons are expected to stay in their homes for what the emergency law dictates will be two weeks, but which the government has already said will be much longer. A month seems to be the standard prediction. As long as it takes to flatten the curve.

The fucking curve. Outside of the Far-East and Iran, Spain has the second highest number of infections and the second highest death rate. Its upward curve is so far steeper than Italy’s was at this point and every day brings a nerve-jangling jump in numbers. It makes sense. As already suggested, Spain’s culture is not conducive to “social distancing” in any sense of the word. They kiss and they touch when they greet each other and drinking alone in a bar will earn you some odd looks. Worse still, generations tend to mix more here than in the U.K. or northern Europe; “I went to my village” is a standard answer when I ask my students what they did on the weekend. It sounds very twee; they just mean they visited their grandparents in whatever mountain or coastal village they’ve retired to. I teach a couple of my students in their grandparents’ flats if their parents are working. Sometimes their cousins are there too because everyone lives within two kilometers of each other. All mixing together. Young and old. The conditions this virus thrives on. There’s something particularly galling and mean-spirited about a high level of social capital somehow, by fate’s cruel hand, becoming the downfall of a society.

Asturias at the time of writing (Tuesday, March 17, 2020) has 193 cases. Today the increase was only four. A sliver of good news, especially in a region with one of the highest average ages—a major outbreak in Asturias could wipe out a significant portion of the region. Spain as a whole has 11,178 cases and 501 deaths. Like Italy, a large proportion of its population is elderly. Almost half the cases in the country are in Madrid.

That first night, Sunday, was tolerable; a deceptively familiar waste of half a weekend like any other. By Monday night I was not myself—a full day’s worth of almost constant bad news, hearsay, rumor, and conjecture coming from sources both reliable and anything but coalesced in my brain and stewed into a paranoia soup. All I could think about were the worst possible outcomes of what is already guaranteed to be a shit show of mid-20th century proportions.

I live in a flat with a Spanish girl and a French guy. There’s ten years between us. We get on fine on the occasions when we meet in the kitchen or hallway. We don’t have much in common though and we don’t really socialize outside of the flat. Now we’re expected to exist within meters of each other for a month for what will probably amount to twenty-three-and-a-half hours a day. We don’t have a garden. We don’t have a balcony. Thank god we are one floor higher than the building opposite and thus have some natural light. (Naturally, class and income are huge factors in how people are experiencing this quarantine. I know families with large houses and gardens and swimming pools. I know another family in a medium-sized flat with two eight-year-old twin boys—god help those parents. I feel awful for whomever’s in the cramped, dark, horrible flat I lived in last year. An English buddy of mine lives just outside Oviedo (the state capital) in a house with a garden so big he keeps chickens and recently constructed a concrete mini-ramp in it. Many people have no doubt run to the hills, literally, because they have summer houses up there they can escape to and can more or less ignore the lock-down).

I started seeing a new girl a couple of weeks ago but it feels as if we met and hung out in previous lives. She lives a five-minute walk from me but she might as well be in Edinburgh. We’ve been plotting ways to hang out, but what about civic responsibility? And what about the cops? My teaching work is stranded in my past life of last week, and even though I’ve got a couple of grand in my Spanish account—which with my paltry rent costs and the lockdown putting a freeze on any frivolous spending should keep me afloat—I don’t fancy the sounds of those fines. Plus she’s nervous that my housemates might have it and don’t know, which means that I might have it and I don’t know. Maybe she already has it and doesn’t know and then gives it to me, and then I give it to my housemates.

That’s why, contrary to expectation, boredom hasn’t so far been an issue. There’s just already so much worry to pass the time with. The personal isolation, zero working hours, and the day stretching out behind and in front of you leaves so much space for the worry and anxiety to creep in. Forget the books you said you’d read or the novel you said you’d start or the album you said you’d write; the human brain’s horrible and persistent tendency for speculation easily fills the emptiness all by itself. It dominates it.

On the micro level: being legally unable to leave your flat and wondering if it’s in me already, waiting to manifest. Is it on the door of the fridge? Did I keep a decent distance when I spoke to my housemate today? How long has it been since I saw that guy who rode the metro in Madrid the week before we had that beer together? Who could I have given it to?—agonizingly counting down several possible incubation periods.

On the macro level: I follow the news on social media and newspapers in two different languages, local, national, and international. The world as we know it is ending in slow motion and I’m seeing it twice; here in real time through the fog of non-native level Spanish language skills and in the U.K. with a few days delay. While Spain takes radical—albeit probably too late—action the U.K. drags its feet, a government made up of ex-hedge fund managers and simpering ideologues whose sole qualification for being there is a proven track record of putting cold, calculated profiteering over any sense of compassion. Boris Johnson, blagger extraordinaire, propelled to the top job by the sheer potency of antiquated privilege and entitlement, looks even more disheveled than usual, rambles for even longer but communicates somehow even less.

Micro level again: friends worried about job losses, lack of sick pay and paying the rent. My favorite venues, bars, and co-ops in the U.K. with no customers but with no guaranteed financial protection. Macro level again: this recession could dwarf anything that’s come before. How can the global economy survive with the engines switched off for several months?

Anyway, I want these posts to be helpful in someway so here’s the first lesson in all of this: ration information. Check the relevant news a couple of times a day and put it aside. Allow a couple of scrolls through Twitter and put it aside. The best memes will appear multiple times on your timeline anyway. Allow yourself to get bored and do those things you’d thought you’d do in these situations. Eventually you’ll begin to achieve a balanced discipline.

There’s more advice and observations I’ll pass on in a future update. By then of course you might be in the same situation as we are here. My general feeling is that far from being unique we merely have a head-start. But hey! Only between eleven and (arbitrary number plucked from thin air) days to go!

John Miskelly lives in Gijón/Xixón, Asturias, Spain. He is thirty-four years old and is so far showing no symptoms.