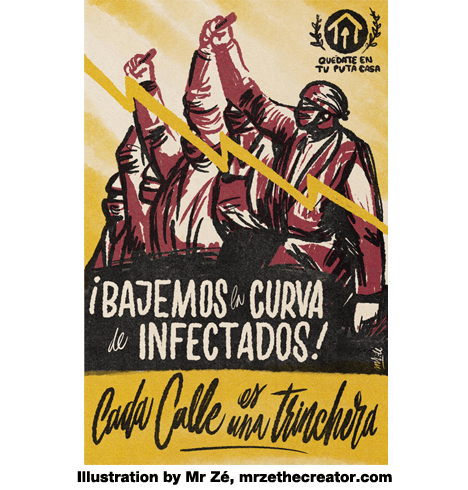 Dispatch from a Spanish Lock-Down Episode 9 by John Miskelly

The Curve Again; Dear Leader Boris Bounces Back; Spain in The After Times

The big news in Spain is that workers in essential jobs that are more essential than most jobs but not as essential as the essential essential jobs are back to work this week. Did that one measure—those two weeks off—save lives and keep hospitals from turning from merely very overstretched to glorified holding pens for the imminently dead? Is the government counting its gallinas too early in easing these new measures while daily death rates are still in the five and six hundreds? We’ll leave that up to future historians to debate. Either way it’s a chance for the government to move some shit around a table with purpose instead of just sitting around the table with their heads in their hands clicking refresh on an Amazon order tracker for some reliable testing equipment.

Anyway they must be doing something right as the curve is beginning to bend downwards, even if it is taking its sweet-ass time about it, teasingly throwing up the odd rise in deaths or contagions on any given day. It’s Fitzcarraldo’s steamship, pulled at snails pace up the mountain on ragged ropes that slip and yield and lose another few feet or meters. I’m not grown up enough to see the graphs in their wider context of days and weeks; I live in the present like a dog or toddler. Any anomaly against the overall declining trend is a little battle lost, dangling the horrible possibility of a backslide, a “ski jump” in the curve that’ll add another two weeks to our confinement. I am a kid waiting for Christmas while time falters and relapses.

Meanwhile Boris Johnson has moved out of intensive care, which pleased sections of the press so much they clean forgot to make room on their front pages for the one thousand British citizens who died that day. Still, why let an ongoing national tragedy get in the way of a mediocre pun and some tin-pot dictatorship levels of media sycophancy? Boris’s dad Stanley said his son “almost took one for the team,” as if Boris was back on the Eton rugby pitch getting nobly concussed in the process of executing a try saving tackle—as if Boris had not only voluntarily contracted the disease but in doing so prevented other people getting it instead of actually becoming a walking petri dish and most likely passing it on to probably at least three people. Not that science and logic will stand in the way of Boris Senior’s completely objective scientific commentary somehow becoming national narrative. Editors were probably salivating at the prospect of Boris leaving hospital on Easter Sunday—“Now That Really Is a Resurrection! Blessed Boris Back from Brink!”

Even on the BBC News website finding mention of the insane numbers of dead in the U.K. from COVID-19—almost twenty times more than died in the 7-7 London bombings, more than any IRA or Islamist attack, more in line with First World War casualty numbers and happening day after day—requires a fair amount of digging. On the El País website there’s a tally right at the top, recording deaths, contagions, and recoveries in Spain and the world. On the BBC website numbers suddenly don’t seem to matter like they did when they were happening in Italy and Spain, a kind of morbid fascination has reverted to coy embarrassment. Now only Boris matters. There he is right now, on the homepage, next to the top story about empty church pews on Easter Sunday: “Boris hails NHS staff while recovering.”

In a national crisis akin to a World War the BBC doesn’t feel like it’s reporting as much as it’s being instructed; passive tense. That’s another thing we’ll have to consider during the fallout to all this; what does the press think the press is actually for?

Speaking of fallouts: as the curve bends at the pace of a stunted oak, articles are beginning to appear in the local and national press regarding the Spain that’ll emerge after all this. In my first dispatch I considered why Spain might be more susceptible to the spread of the virus. Physical contact is important here; the two-kiss greeting, squeezing shoulders, meeting collectively, large groups sitting close together spanning three or four generations. It’s likely that, even when confinement ends and outdoor pursuits are allowed, social gatherings will be banned for some time more. What will be the long-term psychological impact of potentially months of instilled fear around physical contact, proximity, intergenerational mingling—encouraged not by culture or inhibition but genuine fear for one’s health and the lives of others—the very functionality of the country? Anxiety and paranoia aren’t simply switched off. But equally a Spain without restaurants—without “sobremesa”—the tendency to sit and chat and drink sometimes for hours after a meal has finished—isn’t Spain at all.

In a country that’s prided itself on its treatment of its senior citizens (not that the pandemic hasn’t exposed holes in this assumption too) could there be a danger of disconnect, as there is in the U.K., where levels of loneliness among the elderly have gradually grown into their own low-level pandemic? Instead of seeing one’s “abuelos” across the dining room table they’ve been seen only on a pixelated screen, how quickly could this go from necessary and temporary “making-do” to a culturally accepted precaution?

Meanwhile a generation of adolescents that haven never known a world without it are now exclusively dependent on social media already considered a possible detriment to their development. And for younger children still, dependent on routine and still learning the cues of interpersonal communication, how long until physical distancing becomes their “normal,” required to be unlearned in months to come?

In bars and restaurants Spain’s gastronomic tendency towards communality now seems absurdly risky. Trays of cut-up tortilla de patatas and “pinchos,” most typically found in Northern regions such as Galicia, Asturias, Cantabria, and The Basque Country, sitting on bar tops to be grazed on over the course of the day would probably already violate all kinds of health codes in the U.K. and the U.S.—I already have a tendency to avoid them later on in the night. Will these survive the post-COVID-19 mental realignment? Here in Asturias cider drinking is intrinsic to the identity of the region. An Asturias without cider is a France without cheese, except more so because aside from the mere consumption it’s the manner and the method that’s as important: a bottle and a glass shared among a group, one person in the group the designated server (if you’re outside of a bar) and the glass passed around the group, the only concession to hygiene—accidental by the way, no one really knows why it’s done—the last drops of each serving drizzled on the ground or the gutter of the bar.

Of course these idiosyncrasies and trends have developed and survived over sometimes hundreds of years, and the idea that two or three months of inactivity will eradicate them is far-fetched. But it will take time to revert back to the second-nature it was at the beginning of this year. It will, to begin with, require the opposite: conscious effort, counter-intuition, maybe even a bit of bravery.

This of course assumes that those bars and restaurants will even still be around to test to what extent these habits might be affected. While there is financial support for “autónomos” (freelancers and self-employed) and planned support for businesses involved in Spain’s vast tourism industry (one in every seven Euros spent in Spain is in the tourist sector, roughly fourteen percent of the country’s economy) one wonders if any rescue package can ever exist to properly revive such an enormous trade. Assuming that within the course of two or three months restrictions on domestic travel and public spaces are relaxed Asturias should get its regular influx of southerners escaping not just the summer heat but months of confinement in sometimes oppressive urban surroundings (Asturias is principally known in Spain for its mountainous and coastal landscape). This could help the regional economy enormously. Other areas of Spain though, where tourism is almost exclusively foreign, will be drained of their lifeblood.

The truth is of course nobody really knows what will happen next week let alone in the months ahead. Probably best not to get ahead of ourselves.

John Miskelly lives in Asturias, Spain. He is thirty-four years old and is symptom free.