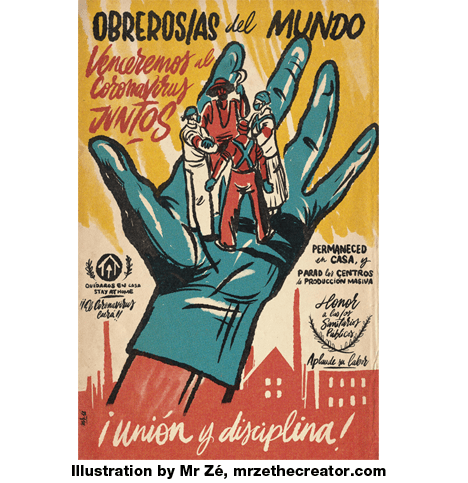 Dispatch from a Spanish Lock-Down Episode 5 by John Miskelly


Day 15: Pedro’s last stand; some Spanish political opinion; a list or whatever

First things first; I’m symptom free. Did I have it? Who knows? Most likely I’ll never know. Still, it leaves things open for the sequel.

In the wider world outside my respiratory system, that’s two weeks of quarantine done. What does that mean? More or less nothing. It was an arbitrary formality of a time span that from the beginning everyone knew wouldn’t represent any kind of end point. We knew because the government that set it said it wouldn’t. Like most major governments in the Western world right now, government on the hoof is business as usual. For Spaniards in absolute quarantine they can rest assured they don’t have the virus. This’ll be a relief for the immunocompromised and the elderly. For everyone else, it’s a massive shrug. We are at least past halfway towards the government’s current stated endpoint. But that’s scant relief for the strugglers, the parents, the lonely, the isolated and the poorly housed, for whom two more weeks is twice the pain. It’s no relief from the economic catastrophe readying itself to double down on 2008’s crash that did such a job on Spain’s economy it didn’t recover to pre-crash levels until… well, it never did. The government says the economy is in “hibernación,” a pitifully lackluster euphemism in any language. “Coma” would be more accurate, medically induced after years of debilitating illness.

The bigger news from Spain however came on Saturday, March 28, when Prime Minister Pedro Sanchez announced a tightening of the current lockdown restrictions; only those involved in completely essential services—or even more completely essential than the ones that were completely essential on Friday— would be allowed to work. Forgive me for not going all Woodward and Bernstein on exactly which industries and businesses this might affect, but I’ve already got a headache trying to read some pretty nuanced Spanish legislative language.

Personally I struggle to see the causality between the overall rates of infection and these new, extra measures. To what extent were these newly shuttered businesses exacerbating the overall situation in the country, if at all? After all, Spain is currently seeing a reduction in the daily percentile increases in both deaths and infections suggesting the measures currently in place—already more extreme than, say, the U.K. and U.S.—are working. How many hospital beds are occupied by workers in the industries specifically affected by Sunday’s decree?

If I could understand the pundits on the news and current affairs show, who talk and shout over each other even more than in the U.K., I might get some answers in the government’s defense. As it stands the political cynic in me sees a solution looking for a problem, gesture politics for the sake of the appearance of proactivity. Meanwhile levels of testing remain pitifully low and workers in one of the greatest health systems in the world continue to fashion improvised gowns from bin bags. 15% of all infections in Spain are in the health sector. This is where the principal battle in this war is being fought. For this reason Sanchez’s seriousness, his immaculateness, his fluidity in speech, all formally encouraging contrasts to the likes of Johnson’s and Trump’s embarrassing verbal ineptitude— like watching a sentence’s bathrobe fall open while it falls down the stairs— looked robotic and hollow on Saturday.

To make matters worse this morning it’s been confirmed that Fernando Simón, the government’s director of the Centre for the Coordination of Health Emergencies has tested positive for Coronavirus. To be honest the poor guy looks so put-upon I assumed he already had at least something. He looks like a tired school science teacher who’s been dragged out of the faculty room before he could finish his coffee and ciggy. Poor bloke working his ass off in a thankless role. I hope he pulls through. Ánimo Fernando!

The consequences of all this for the left-wing coalition of Sanchez’s PSOE and Pablo Iglesia’s more radical Podemos could be fatal. No government anywhere is going to emerge from this with glowing performance reviews (except maybe the Scandinavian ones; freakishly functional socialist paradises with their germ-free bike superhighways) but even when this started several weeks ago lack of notice wasn’t an excuse, and the government was criticized even at the time for letting numerous protests, sports events, and gatherings happen all over the country the weekend before the lockdown.

To some, from this end of March, it looks like criminal negligence. Meanwhile the opposition and right wing of Spain’s political spectrum are biding their time. Yesterday the word “Franco” was trending on Spanish Twitter. It could mean nothing—a trend driven by a million scornful replies to two shit-stirring dickheads. But then that’s what everyone said in the years leading up to far-right party Vox’s eventual surge in recent elections. The far right have a knack of rose-tinting an objectively shit era in history (Franco’s dictatorship) as a remedy to current dark times. Economically the fragility and dysfunction of an economy based on precariousness of work and housing has been exposed, and should work in the left’s favor, but it wouldn’t be the first time that the far-right have taken the legitimate anger of those at the sharp end of capitalism and fashioned it into a stick to beat other poor people: migrants, refugees, homosexuals and “errant” women principally; “weak links” in an otherwise “strong” (read: white, hypermasculine) country.

Still, this is all conjecture. Hopefully I’ll be proven wrong and made to feel small and ignorant by a tweet by a smug twat that starts “this aged well” or ends “let that sink in,” as is the fashion of our time.

In lieu of anything else to write here’s a good thing I read about all this: an open letter from Italian author Francesca Melandri to the U.K. about how they might experience their own lockdown. It’s what I was trying to convey in my first couple of dispatches but more concise and twice as eloquent.


Also here’s a list of things I miss from the Before Times:

The BBC not watched through a sketchy VPN connection

Coffee not made by me

Meals not made by me

Watching any film or show without a tinge of nostalgia for The Before Times (“Yeah, he’s bleeding to death, but at least he’s outside.”)

This one cat I know

Thanks again to Sean Bonnette of AJJ for his nightly streams and Joey Cape and the roster of One Week records for their live streamed show. Thanks in advance to Specialist Subject for tonight’s.