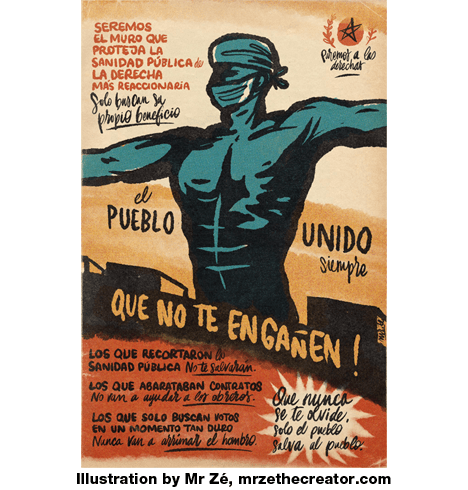 Dispatch from a Spanish Lock-Down Episode 11 by John Miskelly

Sunday was a huge day in Spain. For the first time in forty-odd days children under fourteen were allowed out of the house. A cause for celebration and hope you might think; the first phase of—the first suggestion of—the green shoots of a possible future beyond lockdown and life outside of the house. No celebration for some duty-bound citizen journalists though, who first thing Sunday were out taking photos at such an angle and distance as to make everyone in the shot seem as if they’re sitting on each other’s kids’ laps and riding tandem on scooters and bikes. Hashtag “irresponsables” trended all day along with #multas (fines) and #AsiNo (Not like this). Trust Twitter to turn what should feel like something good into something to high-mindedly shame a stranger about.

Even better and more relevant news because it affects me is that May 2 (Saturday) has been tentatively set as the date we can go outside to do sports and exercises. Two big gifts so close together! The government’s guilt-spoiling us, buying our goodwill possibly; we’re like kids on the first birthday after the divorce. With only a week between announcement and actually happening this feels darn right spontaneous. They have specifically added one condition though; it’s contingent on the death and contagion rates continuing to fall at the current rate. Hopefully we’ll all be able to get in a few waves/laps/circuits/rides before all those tandem scooter riding future sick parents start showing symptoms, and we head back to Twitter to shame the “irresponsables” for the duration of another lockdown.

As should be obvious the curve in Spain is now not just plateauing but properly bending downwards. On Sunday less than 300 deaths were announced, the least since early March. Looking at the graphs I wonder whether “curve” is really even the right word now. It seems to descend more in steps—three weeks ago we were stuck between 600–700 deaths per day, then 500-600, last week 400–500: each week is its own mini-plateau with minor rises and falls in numbers, the months a series of steps the country doesn’t so much negotiate as falls down arse-over-tit like this. Sunday’s drop was significant though, from 378 to 288. If anything like that rate of descent can be maintained there may be more significant de-escalation measures in the not too distant future.

But still no actual end. As emphasized in my last dispatch quarantine buys us time but not a solution. Without a vaccine and the WHO still without any scientifically provable autoimmunization there is no foreseeable end to this. To borrow what has become something of hackneyed phrase, in fact I’ll put in Spanish to make it a bit more interesting and cultured like they do with cafes and boutiques, the best probable result is a normalidad nueva.

You may have noticed I haven’t mentioned anything about the curve of contagion rates. This is because it’s become meaningless to the casual observer, the government having changed how it measures them for a second time according to the credibility of different types of test. At the moment the curve looks like it may end up resembling Donald Duck’s head in profile if that in any way aids your understanding. Apropos of nothing: this is a punk zine not a science journal.  Apropos of nothing again: here’s something really stupid I saw this week.

Desperate, right? Good on The Guardian though for not letting an international travel lockdown get in the way of their conspicuous consumption upper middle-class lifestyle capitalist business model.

Anyway here’s a thing you can use to play livesteam punk gig drinking game. It might make them more interesting to watch, and you must watch them because if you don’t their egos will wither and die and we’ll have no music ever again.

Take a shot if a cat/dog/pet walks into shot

Take a shot if the camera/phone falls over

Take a swig for every plant visible in the room

Take a swig for every band poster visible in the room

Take a shot if someone mentions a cancelled tour/show

Take a shot for every cover version

John Miskelly lives in Asturias, Spain. He is 34 years old and is relearning to read surf reports.