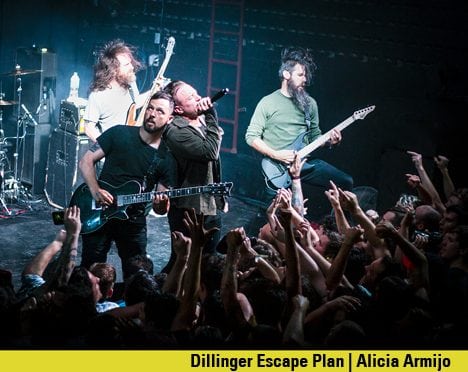 I was forewarned, but nothing could have prepared me for the absolute mayhem and magic of The Dillinger Escape Plan’s sold-out show at the Mohawk in Austin, Texas last Saturday. This undeniably badass show was the very last one that they will ever play in Texas and it was one of their final U.S. performances of their farewell tour after nearly twenty years together. For this greatly anticipated event, this beloved metalcore band was supported by opening acts: American Sharks, a metal-infused indie trio; and Illustrations, a Texas-native grindcore band.

Before the Dillinger Escape Plan’s raucous set began, I unflinchingly made my way through the pit to the front of Mohawk’s outdoor stage. As the band came out member by member, the once-anxious collective of music lovers that surrounded me quickly transformed into a downright uproar of screaming, moshing, and stage-diving metal-heads. From the very start of the band’s set, front man Greg Puciato immediately cleared room in the pit to jump in with screaming fans for a play of their violent classic, “Panasonic Youth.” After mere minutes in the pit and a few serious blows to the head, I—and the rest of the photographers in attendance—swiftly vacated the pit to find a much-needed outside perspective of this spectacle.

The band performed a perfect blend of songs from many of their older albums, including “Milk Lizard” and “Room Full of Eyes,” along with newer favorites as “Symptom of Terminal Illness” and “Limerent Death” from their recent and final album, Dissociation. Throughout their hit-packed set, members of the band (especially Greg Puciato and lead guitarist Ben Weinman) did the seemingly impossible and exceeded the crowd’s insanity and aggression with their intermittent stage diving and limit-pushing ascents up the rafters.

For their grand finale, the band invited fans from the entire venue to join them on stage for a final play of “43% Burnt.” At that point, absolute madness ensued on the completely jam-packed stage and it was nothing short of miraculous that the band members had any hold of their instruments. While singer Greg Puciato, bassist Liam Wilson, rhythm guitarist Kevin Antreassian, and drummer Billy Rymer were all but swallowed up by the crowd, Ben Weinman found a choice spot to shred above it all on top of the sound system, balanced at times merely by his neck against a rafter. In the final moments of their encore, Greg Puciato hung from the rafters, singing upside down with his fellow band members to their captivated fans. “Impressive” does not even begin to describe all of these incredible performers.

Like many fans in attendance that night, I have been listening to the Dillinger Escape Plan since their very first studio album, Calculating Infinity, from 1999. When I heard that Austin would be a destination on their farewell tour, I knew that I couldn’t miss the opportunity to see them in all of their riotous glory. And, I can say—with absolute certainty—I have never seen any performance quite like The Dillinger Escape Plan’s show that night. And, alas, I don’t expect to experience anything like it anytime soon. If you have the chance to catch one of their final shows, I cannot urge you enough to make it happen. No doubt, you will not regret it.

Alicia Armijo is a photojournalist based in Austin, Texas and Los Angeles, Calif.. Her photography can be found at aliciaarmijo.com. She can be reached at [email protected] or on Instagram: @alicia.m.armijo.