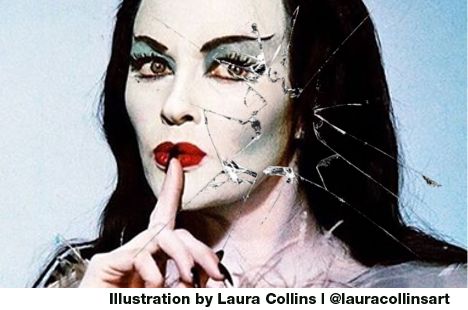 I have a problem with keeping things to myself. I’m someone who seems to word vomit about her neuroses any chance I can get. Yet when it comes to actually speaking about my feelings to people around me, it’s an entirely different story. I either hold too much in or say too much—and neither of those are particularly good for my mental well being. This time I’m going to focus on the former, the things I keep quiet.

I haven’t been shy to acknowledge the fact that it doesn’t take a whole lot to make me cry. What I haven’t really elaborated on is just how much I hate it when people do see me cry. Showing emotion is something I’m not fond of. I don’t like feeling vulnerable around others, simultaneously out of shame and out of a fear the wrong person could use my emotions against me. It makes it difficult when my tear ducts decide to open like floodgates, a great waterfall comes gushing down my cheeks, and I have to try my best through snotty sniffles to say, “No really, I’m fine.” Because even if I’m not fine, even if visually I’m falling apart at the seams, coming out and actually saying that is damn near impossible for me.

So I handle my shit my way: having intense and robust conversations with myself, trying my best to be my own life coach, all in my head. After particularly rough spells, I come to a lot of revelations about who I am and the type of person I wish to be. They happen often and are kept within the safe confines of my brain, despite the fact that that very same brain has a history of splitting into separate malicious beings and forming a group of tormentors hellbent on telling me how bad or weak I am. You would think by now I wouldn’t trust my brain for guidance, but when I’m in the right state of mind and open to acting—and feeling—better, my mental pep talks and boot camps are just the recipe the doctor (me) ordered.

I briefly mentioned that sometimes I’m open to feeling better—being in the right state of mind is an integral part of that. Mindfulness is key. And one thing that’s a huge deterrent for me in being mindful is chemical imbalances—namely, alcohol. It’s not surprising that many of those intense mental conversations come the morning after a night of having one too many drinks—either chastising myself for my lack of impulse control or trying to calmly forgive myself for what I’ve done. I should go on record to say I don’t get drunk often, and when I do, I never do—or have done—anything one might consider “bad.” But the fact that I have to even qualify that is what scares me. What scares me more than that, though, is the feeling that there’s something out there that can completely throw my emotions into a whirlwind, completely out of my control. Alcohol is like the banana in the tailpipe of my well-being, and it’s something I’m coming to terms with and understanding more and more.

Yet having the courage to outright say, “Hey, I’m going to stop drinking because I think alcohol is really bad for my mental health” just seems so daunting. So I give myself tests and experiments. I practice sobriety and moderation. I celebrate my successes. I do it all in silence so when I fail, I only fail to myself. That also means that when I achieve what I set out to do, I’m the only one who knows.

I try to avoid social situations so I don’t have to explain why I’m abstaining, or if I do decide to brave them, I feel tense, woefully aware of how I’m not partaking in the “fun” the others might be having. Not because I feel like I’m incapable of having fun, but more out of fear of what others will say. I dread the questions and weird looks when I’m confronted. “Why aren’t you drinking?” and the even more annoying, “Are you pregnant?” (Please, I beg this of you, stop asking this question of women who are abstaining from alcohol). I come up with some kind of glib response because it’s easier than having to blurt out, “Because drinking dredges up the worst of my inner monologues and gives it a voice and the subsequent hangover doesn’t hurt as badly as the mental breakdown that preceded it nor the negative thoughts that will follow for hours, if not days.” Often the fear of being put on the spot to talk about why I’m taking better steps for my mental health seems more challenging than taking the steps themselves.

Yet, despite all that, those successes do just feel so damn good. Waking up with a clear mind and an ability to completely control my thoughts and actions is so liberating. Going the steps further beyond alcohol help, too. When I feel better about the way I’m eating or how I’m treating my body, I want to shout it from the rooftops. I want people to know I feel good. Mostly because, above all else, I want others to know they can feel that way, too.

But instead, I keep to myself, doing my damndest to make sure people aren’t let in too much about what’s going on in my life or in my head, keeping a facade of cool and “normal” so that my friends or acquaintances won’t pry further or worry. Juggling this absurd notion of wanting to be there for them to open up to but also wanting to keep myself closed off, and then giving in to the notions that people don’t care enough about me, even though I know that I’ve done my best to shut them out.

It’s time to end that. It’s time to be as open IRL as I can be behind a keyboard, to just say, “Hey, I’m not doing this because I need to give my brain a break,” or “I’m taking these steps to be mentally well and even if I don’t want to talk about it too much further, I hope you understand and will support me.”

I can also hope that all of those people will just read this article and get the jist, too. Meanwhile, I’ll continue to take the actions needed for my well-being, including not only practicing—but truly believing in—those talking points. Even if it’s just by saying them all out loud to myself; giving them words gives them power. And yes, the spoken words are important, but that doesn’t mean the written ones fall by the wayside. Maybe this will be the kick in the pants I need to make the changes I want to see in myself.